During the Last Supper, Jesus pleaded four times for unity. 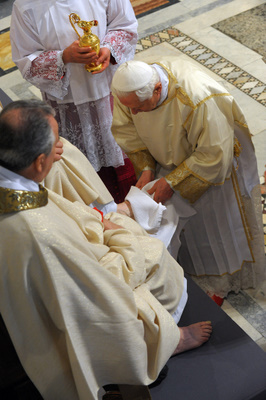 Pope Benedict says that plea remains his constant prayer to the Father on our behalf. Unity, conversion and humility were themes from the Holy Father's homily celebrated today at the Mass of the Lord's Supper. "How deeply it must have concerned him!" said the Holy Father regarding unity, adding:

Jesus explicitly states that this prayer is not meant simply for the disciples then present, but for all who would believe in him (cf. Jn 17:20).  ... Christian unity can exist only if Christians are deeply united to him, to Jesus.

And as we mark the institution of the Blessed Sacrament on this day, the Holy Father says unity can be found in the Eucharist:

With the Eucharist, the Church is born.  All of us eat the one bread and receive the one body of the Lord; this means that he opens each of us up to something above and beyond us.  He makes all of us one.  The Eucharist is the mystery of the profound closeness and communion of each individual with the Lord and, at the same time, of visible union between all.  The Eucharist is the sacrament of unity.  It reaches the very mystery of the Trinity and thus creates visible unity.

Pope Benedict also recounted the need for conversion and humility, and used the example of the Apostle Peter to illustrate this. He recalls Peter could not accept that Jesus would suffer and be crucified.

We too, all of us, need to learn again to accept God and Jesus Christ as he is, and not the way we want him to be.  We too find it hard to accept that he bound himself to the limitations of his Church and her ministers.  We too do not want to accept that he is powerless in this world.  We too find excuses when being his disciples starts becoming too costly, too dangerous.  All of us need the conversion which enables us to accept Jesus in his reality as God and man.  We need the humility of the disciple who follows the will of his Master.  Tonight we want to ask Jesus to look to us, as with kindly eyes he looked to Peter when the time was right, and to convert us.

See the the homily below:

MASS OF THE LORD'S SUPPER HOMILY OF HIS HOLINESS BENEDICT XVI Basilica of St John Lateran Holy Thursday, 21 April 2011 Dear Brothers and Sisters! “I have eagerly desired to eat this Passover with you before I suffer” (Lk 22:15). With these words Jesus began the celebration of his final meal and the institution of the Holy Eucharist. Jesus approached that hour with eager desire. In his heart he awaited the moment when he would give himself to his own under the appearance of bread and wine. He awaited that moment which would in some sense be the true messianic wedding feast: when he would transform the gifts of this world and become one with his own, so as to transform them and thus inaugurate the transformation of the world. In this eager desire of Jesus we can recognize the desire of God himself – his expectant love for mankind, for his creation. Continue reading

- CNS photo/Alessia Giuliani, Catholic Press Photo: Pope Benedict XVI washes the foot of a priest during last year's Mass of the Lord's Supper at the Basilica of St. John Lateran.