Understanding One Another – Reflections on a Plenary 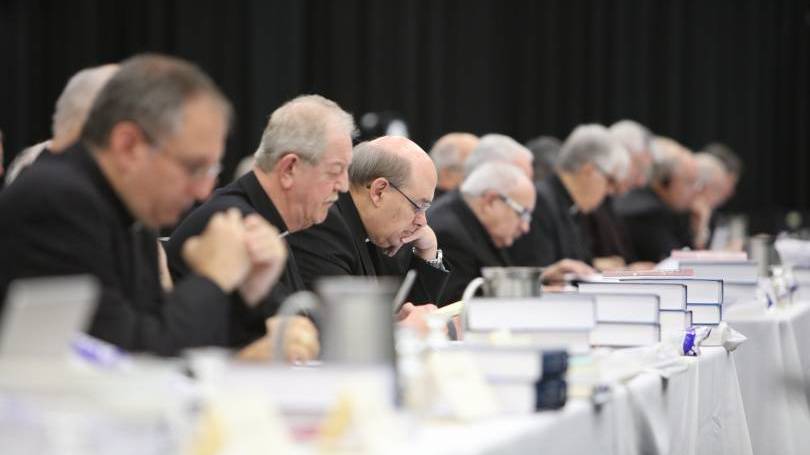 “In the end it helps us because it forces us to make efforts to understand one another.”

As the assembly sat absorbed, eyes focused on the screens at the front of the room, those simple words were spoken by the Most Rev. Pierre Morissette, Bishop of the Diocese of Saint-Jérôme and President of the Canadian Conference of Catholic Bishops (CCCB) from 2009 to 2011. The line was part of The CCCB at 75 Years: The Presidents Remember, a new documentary by Salt + Light in which a number of past presidents had the chance to reflect upon their time leading the Conference. In that moment in the film, the words spoken by Bishop Morissette were in reference to the language differences that arise between the Conference’s French- and English-speaking members, but at this year’s Plenary Assembly, it could have been a comment on much of what has been taking place throughout the meeting. The Plenary Assembly is a meeting of all the bishops of Canada, and I’m here this week helping Salt + Light offer media coverage of the event. As a young priest who’s not a bishop, an American who’s not a Canadian, and a Salt + Light intern with next to no training in media, I would have to say that I’ve been something of an outsider at the Plenary I find myself attending. As such an outsider, it might be easy to feel overlooked or disconnected in some way, but the reality has been quite different. Instead of feeling excluded, I’ve felt welcomed, and I think that has a lot to do with those words from Bishop Morissette or, maybe better yet, has to do with an underlying message of welcome and connection that the Canadian bishops seem focused on promoting. This is a message that’s been present again and again so far during the Plenary but came through quite visibly in the words of three of the key speakers. It began early on the very first day with the words of Bishop Lionel Gendron, P.S.S., the current CCCB President. Bishop Gendron clearly noted in some of his opening remarks that we need to journey “side by side” in our work, especially with those in need. Later in the day, His Beatitude Mar Béchara Boutros Cardinal Raï, the Maronite Patriarch of Antioch and of all the East, emphasized the need for people to work together and learn more about each other. He noted the oneness of the Church and implored the bishops to show care for those who are struggling, not pushing aside the needs of the other or of minority groups. Then, speaking on the necessity of good leadership, His Excellency the Most Reverend Luigi Bonazzi, who is the Apostolic Nuncio to Canada, spoke quite passionately and argued his belief that the root of so many of the struggles in our Church “is a crisis of communion.” In all of these moments, a feeling of the need for welcome and connectedness came through with clarity, and especially in a time when some voices appear to be trying their best to tear the Church apart, this was a beautiful attitude that showed a starkly different way. It was a unifying message from the Canadian bishops and one that could be heard no matter which language was being spoken. And that takes us back to the words of Bishop Morissette. His sentiment of building understanding even through differences in language is one that the Conference has made a priority, and, for me at least, it’s been something that can most definitely be felt. It might be the alternation of English and French speakers in talks and prayers; it might be the translations being offered throughout the meetings for those who wouldn’t be able to understand otherwise; or it might simply be the fact that the bishops have been welcoming to this outsider no matter which language he speaks and how much he does or doesn’t seem to belong. In all of these ways and plenty of others, an openness can be seen and felt here that is needed in our Bishops’ Conferences but even more desperately needed in the Church in general. In my time at the Plenary so far, it’s been encouraging to see how the bishops of the CCCB have taken this open, welcoming approach to one another and to the Church. You could say that bringing two languages together is a small kind of welcoming and no big deal, but in reality, it’s a key example of how to do this. If we put in the effort to understand each other’s language, we can learn to speak the same language in so many other things, beginning the process of truly learning to “understand one another.”