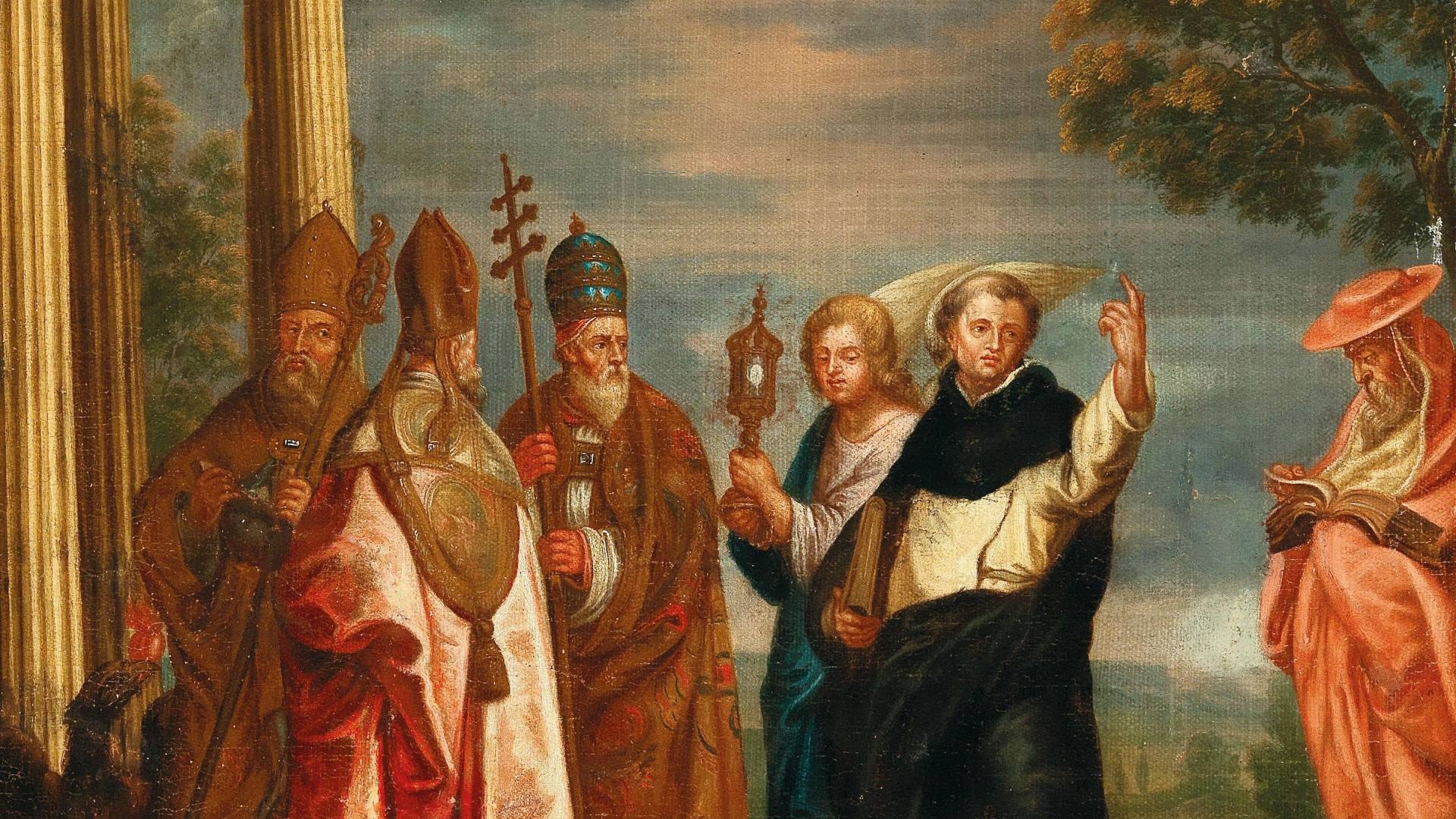 Detail of Saint Thomas Aquinas with Saints Ambrose, Augustine, Pope Gregory the Great and Jerome contemplating the Blessed Sacrament by Erasmus de Bie (Source: Wikimedia Commons)
So far we’ve learned that among the group that we call “Church Fathers” we have the Apostolic Fathers (who we learned about two weeks ago) and the Greek Fathers (who we learned about last week). There are also the Latin Fathers, the Syriac Fathers, and the Desert Fathers.  Many of these are also considered Doctors of the Church, but not all. Today, let’s look at the Latin Fathers, known by this title for the language that they wrote in. They are also called the Western Fathers. Tertullian (c. 160–c. 225), sometimes called the father of Latin Christianity, was born in Carthage, in northern Africa, and was the son of a Roman centurion. After his conversion, he became a priest and lawyer in Rome. He wrote three books in Greek but is said to have been the first great Christian writer in Latin, one who introduced the terms trinitas, vetus testamentum (Old Testament), and novum testamentum (New Testament) into the Latin vocabulary, and the first to refer to consecrated virgins as “brides of Christ”. Many of his works still exist, and his writings are mostly apologetics against paganism. Like Origen, he is one of our Church Fathers who is not considered a saint. This is because in later life, Tertullian embraced the Montanist heresy (also known as “New Prophecy”), which accepted visions from certain new prophets who claimed inspiration from the Holy Spirit. Cyprian of Carthage (c. 200–258) was a Christian convert who became Bishop of Carthage. During the Valerian persecution, many of the faithful of Carthage apostatized by sacrificing to Roman gods. Cyprian condemned these cowardly acts and demanded that these people do public penance before being re-admitted to the Church. This led to a schism in his diocese, which he survived. Eventually, he was martyred during the Valerian persecution – the records of his trial still exist. Greatly influenced by Tertullian, as bishop, he wrote extensively, mostly with a pastoral intent. Pope Damasus (305–384) was the bishop of Rome from 366 to his death. He was born to Christian parents, his father being a priest. He was pope during the official recognition of Christianity as the religion of the state in 380. He presided over the Council of Rome, which determined the official canon of Scripture. Damasus commissioned the translation of the Bible into Latin (known as the Vulgate) by Jerome, who had been Damasus’ personal secretary. He also helped Athanasius of Alexandria against Arianism, which helped bring reconciliation between the Roman and Antiochian Churches.  Damasus was also a great supporter of the veneration of martyrs and restored the catacombs. Other Latin Fathers are Gregory the Great, Ambrose, Augustine, Jerome, Isidore of Seville, and Hilary of Poitiers, who are all considered Doctors of the Church. You can read about them in Deacon-structing Doctors of the Church, part 1 (Gregory, Ambrose, Augustine, Jerome); part 2 (Isidore), and part 3 (Hilary). Come back next week and we will look at our Syriac Fathers.