Deacon-structing Doctors of the Church, part 1 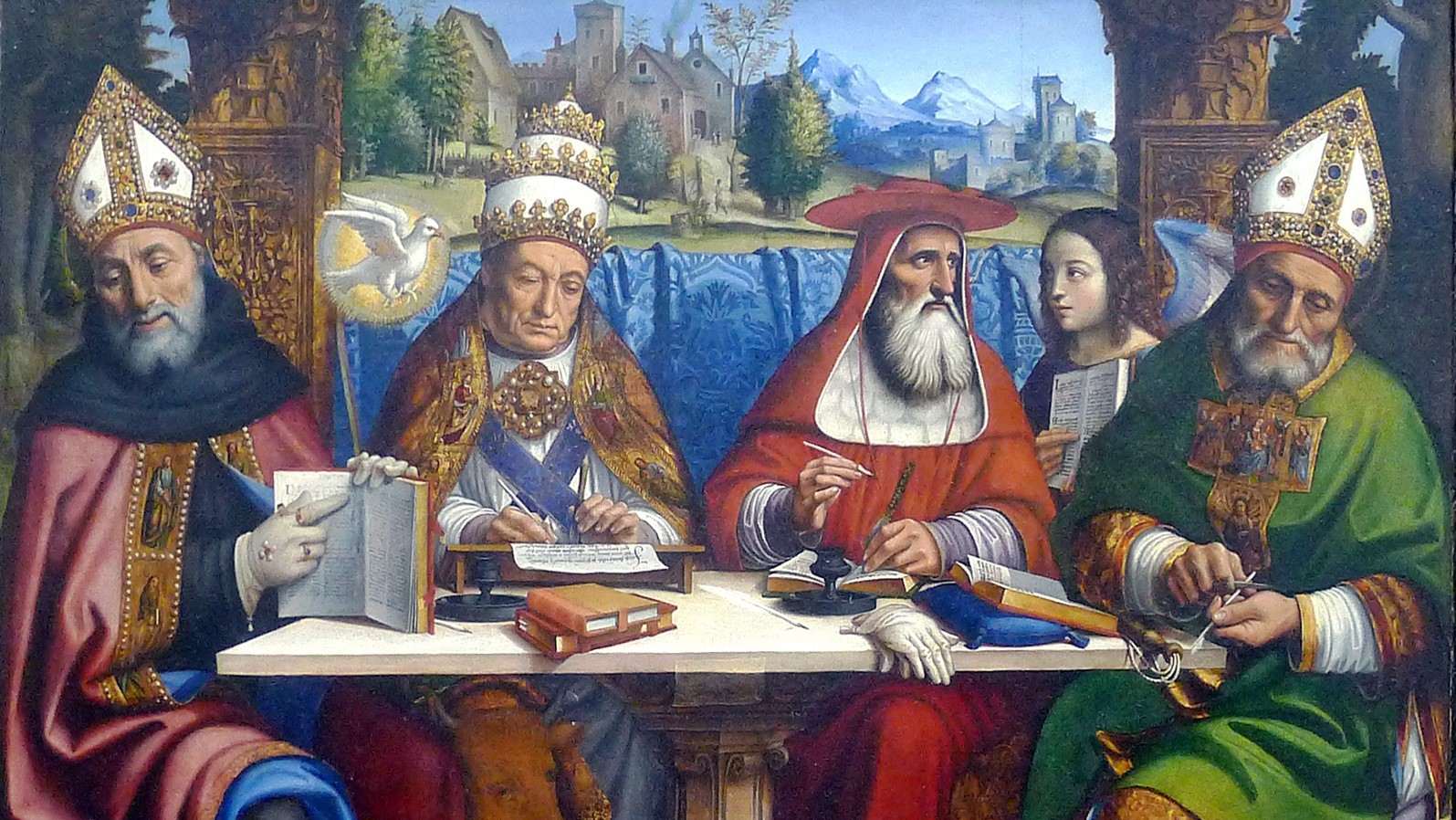 Detail of The Doctors of the Church by Pier Francesco Sacchi, depicting the four Great Latin Fathers: St. Augustine, St. Gregory the Great, St. Jerome, and St. Ambrose (Source: Wikimedia Commons)
A few weeks ago in conversation with a friend about saints and church patriarchs, I asked him if he knew any of the Doctors of the Church. He looked at me, a bit perplexed, and said, “St. Gianna Molla?” It’s true, St. Gianna was a medical doctor, but she is not one of the Doctors of the Church. The word “doctor” means “learned person”. It was traditionally used to refer to teachers. It comes from the Latin word docere, which means “to teach”. That is why today people can get a doctorate in something. My brother is a doctor of history. For some reason we tend only to use the word to refer to physicians. They are not the only doctors; they are medical doctors. The Church also has doctors. They are the saints who have been recognized by the Church as having made a significant doctrinal or theological contribution to the Church. There are 36 doctors of the Church. Over the next six weeks, I’d like to share a little bit about them in the hope that you will get to know about them and perhaps feel inspired to read what they wrote and taught and maybe get to know them better.   Gregory the Great: He is one of the four Great Latin Fathers. Gregory was pope from 590 to 604. He came from a wealthy and renowned Roman family, entered public service, and was ordained a deacon. He then entered monastic life and from there was elected to the papacy. Among his writings are The Dialogues, Pastoral Care, Homilies on the Gospel, Homilies on Ezekiel, and Sermons on the Song of Songs. Several of his letters also exist. Gregory helped to make monastic ideals more applicable to the whole Church. Gregory is probably best known for his liturgical reforms and for the popular style of singing named after him (Gregorian Chant).

“The greatness of contemplation can be given to none but those who love.” – St. Gregory I

Ambrose: Also one of the four Great Latin Fathers. He was Bishop of Milan from 374 to 397. Ambrose also came from a prominent Roman family and was in public service but not baptized nor trained in theology before becoming bishop. He was acclaimed bishop and within a week was baptized, ordained, and consecrated. He is recognized as the one who put an end to the Arian Heresy in Milan and for baptizing St. Augustine and writing many hymns, like the Te Deum. Among his writings are Concerning Repentance, Concerning Virgins, Concerning Widows, Exposition of the Christian Faith, Memorial, On the Duties of Clergy, On the Holy Spirit, and On the Mysteries, as well as several letters.

“He who reads much and understands much, receives his fill. He who is full, refreshes others.” – St. Ambrose

Augustine: He is the third of the four Great Latin Fathers. He was Bishop of Hippo in North Africa from 395 to 430. After over 30 years of living as a non-Christian (and due to the prayers of his mother, St. Monica, and the influence of St. Ambrose), Augustine finally converted and was baptized in 386. In 391 he was ordained to the priesthood. He is one of the most influential of the Church Fathers, having helped to formulate the doctrines of original sin and free will and the development of the just war theory. He is best known for his autobiography, Confessions. Among the over 100 of his surviving works are City of God, On Rebuke and Grace, On the Gift of Perseverance, On the Trinity, On Christian Doctrine, and On Free Choice of the Will.

“Thou hast made us for thyself, O Lord, and our heart is restless until it finds its rest in thee.” – St. Augustine

Jerome: He is the last of the four Great Latin Fathers. Jerome was a monk and lived in the 4th century. Jerome was born in the Roman province of Dalmatia and was baptized in his 20s. He was attracted to the ascetic life and went on a journey throughout Asia Minor. He was ordained in Antioch in 378 and studied under Gregory Nanzianzen. After a time in Rome, he returned to Palestine and lived in a cave in Bethlehem until his death. He is best known for his translation of the Bible into Latin, for his commentaries on Scripture, and for his biographies. Among his writings are The Perpetual Virginity of Blessed Mary, The Dialogue Against Luciferians, Against Pelagians, and Prefaces and Illustrious Men, as well as hundreds of letters.

Thomas Aquinas: Also known as the Angelic Doctor. He was a Dominican priest and theologian in the 13th century. He was highly influenced by the writings of Aristotle and is himself considered to be one of the greatest philosophers of the Western world and is the father of the school known as Thomism. His contributions are extensive and on many topics, including grace, the nature of God, the nature of sin, the nature of the Trinity, and the nature of Jesus Christ. He is best known for his Summa Theologiae, but he also authored other books, including his seven systematic disputations and several philosophical commentaries, as well as many letters, biblical commentaries, and liturgical works. Aquinas also wrote many hymns of adoration that we still sing today, including the O Salutaris Hostia, the Pange Lingua and the Tantum Ergo.

John Chrysostom: He is one of the four Great Greek Fathers. Chrysostom was the Archbishop of Constantinople between 397 and 407. He was a hermit before being ordained to the diaconate and then to the priesthood. During this time he became known for his preaching, the name “Chrysostom” meaning “golden-mouthed”. He wrote various homilies on different books of the Bible and a number of treatises, such as On the Priesthood and Against Those Who Oppose the Monastic Life and On the Incomprehensibility of the Divine Nature. He also helped bring into harmony the liturgy by revising the Divine Liturgy.

Come back next week, and we’ll look at some other Doctors of the Church.