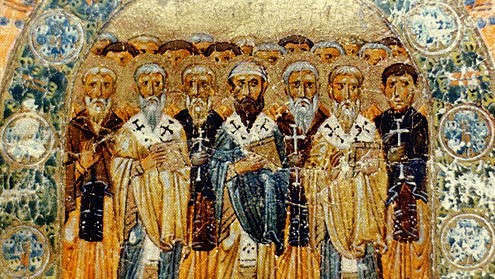 Illustration from the 11th-century Svyatoslav Miscellany depicting the Church Fathers (Source: Wikimedia Commons)
All throughout the season of Easter we’ve been learning about the men and women saints that the Church calls “doctors” for their contributions to Catholic teaching (see Deacon-structing Doctors of the Church). As I also learned about the Doctors of the Church, it didn’t take long for me to begin wondering about the men whom the Church calls “Fathers” (since many of the Doctors are also called "Fathers"). Even though I did not have to study “Patristics”, I know that this is a basic theology course for anyone in seminary. My understanding was that studying Patristics means studying the writings of the Church Fathers. Then I received an email from Joe Atkinson of North York, Ontario who wrote:

"A quick thank you very much for the outlines of the Doctors of the Church.  It filled in several gaps for me.  Much appreciated. Now, I would love to see the same thing for the men who are called the Fathers of the Church.  Have you (or someone else) done this?  I am sure there must be a few women among them, but no one has been bold enough to call them Mothers of the Church, except of course for Our Lady, the Virgin Mary, herself."

I didn't need more encouragement. When I went to check, I discovered that it's not so simple: We have Early Church Fathers, Eastern and Western Great Fathers, Apostolic Fathers, Syriac Fathers, and also Desert Fathers (no Church Mothers, sorry Joe, but I promise to keep searching). Patristics (sometimes also referred to as Patrology) is the study of the writings of some of these early Church Fathers.  The name comes from the Latin word for father: pater. Patristics only covers the early period of the Church, from the second century (after the end of the New Testament) to either the Council of Chalcedon (AD 451) or the Second Council of Nicaea (AD 787). Everything that we know about the early Church following the Gospels and the writings of the Apostles we know from the writings of these men. Some of the Early Church Fathers are considered Great Fathers. They are divided between those in the Western (or Latin) Church and those in the Eastern (Greek) Church: Western Church Ambrose (340–397) Jerome (347–420) Augustine of Hippo (354–430) Pope Gregory I (540–604) Eastern Church Athanasius of Alexandria (c.296 or 298–373) Gregory of Nazianzus (329–c. 390) Basil of Caesarea (c. 330–379) John Chrysostom (347–407) You will recognize that all of them are also Doctors of the Church. Other than these, the most prominent Church Fathers in the Patristic era are: Ignatius of Antioch, Clement of Rome, Polycarp, Justin Martyr, Irenaeus of Lyons, Clement of Alexandria, Tertullian, Origen, Cyprian of Carthage, Gregory of Nyssa, Cyril of Alexandria, Maximus the Confessor, Isaac of Nineveh, and John Damascene. Of this list, Cyril of Alexandria and John Damascene are also Doctors of the Church. Let’s begin with the first three, who are known as the Apostolic Fathers because they lived in the 1st and 2nd centuries. Their writings are the principal sources about the early Church in the two or three generations following the Apostles:   Apostolic Fathers Ignatius of Antioch (c. 35–c. 108) was a disciple of the Apostle John and the third Bishop of Antioch. Tradition holds that St. Peter himself left instructions that Ignatius should be appointed Bishop of Antioch.  There is also a tradition that he was one of the children that Jesus took into his arms and blessed in Matthew 19, Mark 10, and Luke 18. Ignatius is mainly known for the letters he wrote on his way to martyrdom in Rome. Read more about him here. Clement of Rome (?–c. 101) is named in the 1st Eucharistic Prayer as the fourth successor of St. Peter as Bishop of Rome. However, there is a tradition that says he was consecrated by Peter and may have actually succeeded Peter as pope (all three, Linus, Cletus, and Clement may have been consecrated as bishops by Peter at the same time). It is very likely that he is also the Clement that St. Paul refers to in Philippians 4:3.  He was also martyred and is remembered mainly for his epistle to the Corinthians. Polycarp of Smyrna (c. 69–c. 155) was a friend of Ignatius of Antioch, a disciple of the Apostle John, and Bishop of Smyrna (in present-day Turkey). Tradition holds that St. John himself ordained him Bishop of Smyrna. Together with Ignatius and Clement, Polycarp’s writings are the earliest Patristic writings that we still have.  He is remembered for his martyrdom, where tradition holds that he was stabbed multiple times when the flames of the stake he was tied to failed to consume him. Less known but also considered one of the Apostolic Fathers is Papias of Hierapolis, who was a companion of Polycarp and also a disciple of St. John. Hierapolis was a Greek city, near Ephesus, in what is present-day Turkey, where the Apostles Philip and Nathaniel were martyred. There is a tradition that holds that Papias learned from the daughters of Philip, the deacon. In his writings, Papias refers to “John the Elder”, which could refer to a different John other than John the Apostle, John the Evangelist, or even John of Patmos (which could all be the same John as well). It is in one of these writings that we learn that the evangelist Mark was the interpreter for St. Peter and wrote the Gospel “accurately as many things as he recalled from memory – though not in ordered form”. Although many fragments still exist of Papias’ writings, any full texts are lost. If you want to know what the Church was like in that first century, after the time of the Apostles, you have to read the writings of our Apostolic Fathers. Come back next week and we’ll look at the Greek (or Eastern) Church Fathers.