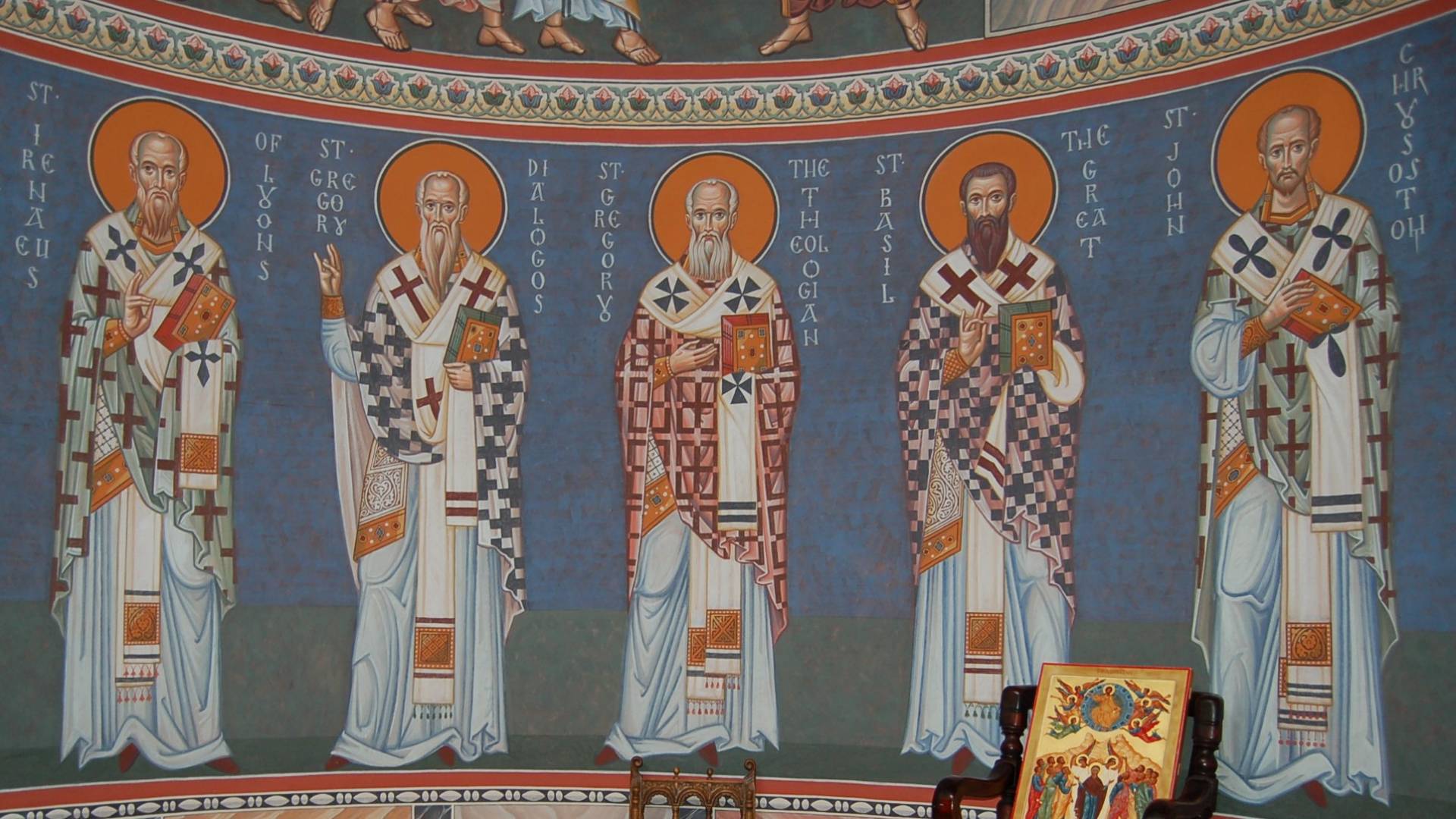 Painting of Church Fathers in Holy Ascension Orthodox Church (Mount Pleasant, SC) by Dmitri Shkolnik and Alexander Chornii. Photo credit: Andrew Gould on Wikimedia Commons, cropped and used under the terms of license CC BY-SA 2.0
Last week we learned that the Church reveres certain ancient theologians and writers as Church Fathers. Their writings helped establish many of the doctrinal foundations of our Faith. Among the Church Fathers, a group is recognized as Apostolic Fathers. These are Ignatius of Antioch, Clement of Rome, Polycarp of Smyrna, and the less known Papias of Hierapolis. We learned about them last week. The Church Fathers are also divided among those we call “Greek (or Eastern) Fathers”, “Latin (or Western) Fathers”, “Syriac Fathers”, and “Desert Fathers”. Today let’s look at our Greek Fathers. They are so called because that is the language they wrote in. Justin Martyr (c. 100–c. 165) was a gentile born in Samaria. After being disappointed with the philosophy he studied, he learned about Christianity and converted. He became a travelling teacher and founded his own school in Rome. He was martyred under the Roman emperor Marcus Aurelius. Three of his writings remain: the Dialogue and two Apologies. The best-known one, his First Apology, provides many philosophical arguments and details of Christian rituals. It is considered one of the earliest works of Christian apology and contains one of the earliest descriptions of the Sunday Mass, detailing the readings, the homily (exhortation), the prayers, the offerings, the distribution of the Eucharist, and even the collection. Irenaeus of Lyons (c. 120–c. 202) was a disciple of Polycarp who was born in Smyrna and became bishop of Lugdunum, which is now Lyons, in present-day France. Irenaeus was born into a Christian family. He wrote many books, but the most important is Against Heresies, a series of five books in which he refutes Gnosticism. Irenaeus was also the first to claim that the canonical Gospels were Matthew, Mark, Luke, and John and to attest that the Gospel of John was written by John the Apostle and the Gospel of Luke was written by Luke, the companion of St. Paul. Clement of Alexandria (c. 150–c. 215) was a Greek convert to Christianity who became a theologian and philosopher and taught at the Catechetical School of Alexandria. He wrote three major works – the Protrepticus (Exhortation), the Paedagogus (Tutor), and the Stromata (Miscellanies) – in which he uses philosophical arguments to refute paganism and instructs the readers to act morally. In them he covers many topics including culture, technology, Judaism, scripture, asceticism, marriage, sexuality, martyrdom, prayer, and salvation. Origen of Alexandria (c. 160–c. 225) was an Egyptian scholar and theologian who taught in Alexandria, where he learned from Clement. When he was 17, his father was martyred and his family left in poverty, leaving him as the sole provider for his mother and eight younger siblings. Even though he contributed greatly to the teaching body of the Church, he is one of our Church Fathers who is not considered a saint. Origen was condemned by his bishop for being ordained without his permission and for castrating himself (a claim that has been refuted). After this, he moved to Caesarea, where he founded a Christian school. Later some of his teachings about the Trinity were considered anathema by the Second Council of Constantinople. However, he was a devout follower of Christ and an influential teacher who fought against many heresies of the time. He was a close friend of St. Ambrose and the author of over 2000 treatises. Maximus the Confessor (580–662) was a monk, theologian, and scholar, whose title "confessor" means that he suffered for the faith, even though he was not martyred. This refers to the fact that he was persecuted and tried for his views on the nature of Christ, having had his right hand and tongue cut off. Maximus claimed that Christ possessed both a human and divine will, refuting the current view of the time that Christ had only one will. Twenty years after his death, the Third Council of Constantinople vindicated him. Within a generation, he was venerated as a saint. Gregory of Nyssa (332–395), together with Basil the Great and Gregory Nazianzus, is known as one of the Cappadocian Fathers, named for the region they lived and worked in. He was Basil’s younger brother – growing up in a family of saints: Their older sister was St. Macrina, and their brothers were St. Naucratius and St. Peter of Sebaste. Their paternal grandmother was St. Macrina the Elder, and their maternal grandfather was martyred. Gregory studied in Athens and became the bishop of Nyssa. Tradition holds that his wife was Theosebia the Deaconess, who is revered as a saint in the Orthodox Church. Together with the other two Cappadocian Fathers, he made significant contributions to the definition of the Trinity and the Nicene Creed. St. Basil and St. Gregory Nazianzus are also considered "Greek Fathers". You can read about them in Deacon-structing Doctors of the Church, part 2. The other three Eastern Fathers are Cyril of Alexandria (d. 444), John Damascene (d. 749), and John Chrysostom. They are also considered Doctors of the Church. You can read about them in Deacon-structing Doctors of the Church, part 1 and part 4. Come back next week and we’ll take a look at the Latin Fathers: Tertullian, Cyprian of Carthage, Hilary of Poitiers, Pope Damasus I, and Isidore of Seville.