Deacon-structing Doctors of the Church, part 2 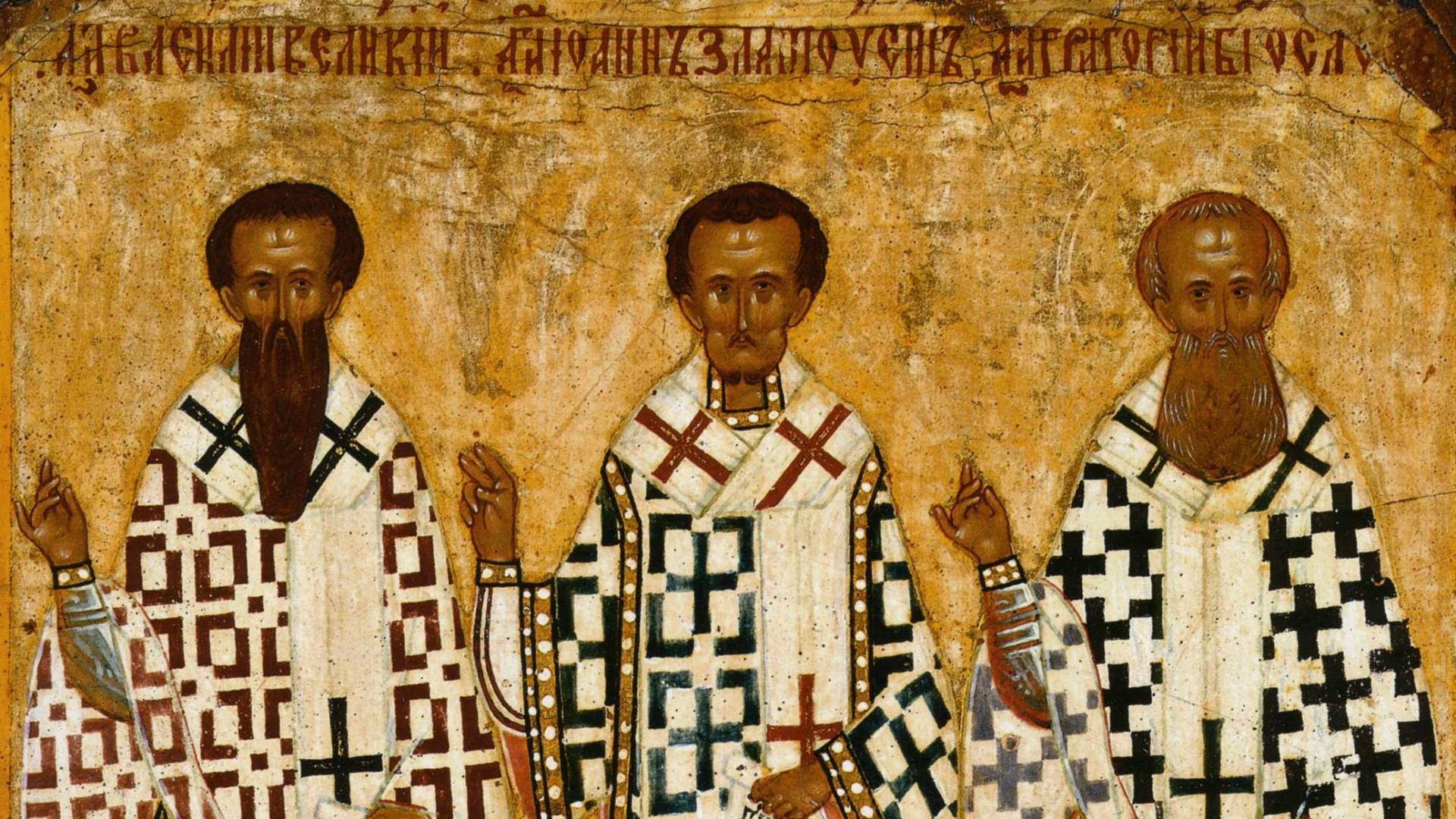 Detail of an icon of the Three Holy Hierarchs, from Veliky Novgorod, Russia. Left to right: St. Basil the Great, St. John Chrysostom, St. Gregory of Nazianzus. (Source: Wikimedia Commons)
Last week  we began learning a bit about the saints whom the Church calls “doctors” for their contributions to the theology or doctrine of the Church, including the four Great Latin Fathers. There are 36 in total. Today we continue with these six:   Basil the Great: He is one of the four Great Greek Fathers and one of the Cappadocian Fathers. Basil was the Bishop of Caesarea in Cappadocia (modern-day Turkey) in the 4th century. His four siblings, Macrina, Naucratius, Peter of Sebaste, and Gregory of Nyssa are all venerated as saints. Basil is known for helping develop the monastic traditions of the Eastern Church. He attended the Council of Constantinople, where he supported the Nicene Creed. He was also a strong opponent of the Arian heresy and helped with our understanding of the Trinity. Among his writings are On the Holy Spirit, Refutation of the Apology of the Impious Eunomius, Moralia, and Asketika. Many of his sermons and letters still exist.

Gregory of Nanzianzus: He is also one of the four Great Greek Fathers and one of the three Cappadocian Fathers. He was a good friend of Basil and Archbishop of Constantinople. He was also influential in helping developing our Trinitarian theology and the theology concerning the nature of the Holy Spirit. He is the one who first used the idea that “the Spirit proceeds from the Father”. Gregory was also an ardent opponent of Arianism. His most well-known writings include two autobiographical poems, De Vita Sua and De Se Ipso, as well as many letters and sermons.

“Grace is given not to them who speak [their faith] but to those who live their faith.” – St. Gregory of Nanzianzus

Athanasius: He is the third of the four Great Greek Fathers and a contemporary of Basil and Gregory of Nanzianzus. He was Bishop of Alexandria, Egypt, for 45 years. Athanasius was also an opponent of Arianism and attended the First Council of Nicaea as a deacon, assisting his bishop. After his death, Gregory of Nanzianzus hailed him as a “Pillar of the Church”. He was also the first person to identify the 27 books of the New Testament that we still use today. Among his writings are Against the Heathens, The Incarnation of the Word of God, Life of Antony, Discourse on Virginity, and Love and Self Control. Many of his letters and treatises also still exist, including his Letters to Serapion and his Epistle to Marcellinus.

“Christ was made man that we might be made God.” – St. Athanasius

Bonaventure: He was a Franciscan and Cardinal Bishop of Albano who lived in the 13th century. He was a student together with Thomas Aquinas in Paris and is known as the Seraphic Doctor. Bonaventure’s contributions at the Second Council of Lyon led to a union of the Greek and Latin Churches. He made numerous contributions to theology and philosophy, namely in the areas of faith and reason, teaching that the goal of all the arts and sciences is the direct contemplation of God. Among his writings are Commentary on the Sentences of Lombard, Journey of the Soul into God, Reduction of the Arts to Theology, The Life of Christ, The Tree of Life, and The Life of St. Francis.

Let meditation of Christ's life be your one and only aim, your rest, your food, your desire, your study." – St. Bonaventure

Anselm: Known as the Magnificent Doctor and the Marian Doctor, he was a Benedictine monk and the Archbishop of Canterbury between 1093 and 1109. He is known as the “father of scholasticism”. His theology can be summarized with the phrase “faith seeking understanding”. Among his writings are A Monologue on the Reason for Faith, An Address on God’s Existence, Cur Deus Homo, On the Virgin Conception and Original Sin, and his dialogues: De Grammatico, De Veritate, De Libertate Arbirtrii, and On the Devil’s Fall.

Isidore of Seville: He was the Archbishop of Seville, Spain, between 600 and 636. He eradicated Arianism and presided over the second and third Councils of Seville and the Fourth Council of Toledo. He established a seminary in every diocese in Spain and made sure that the arts and medicine were taught in seminaries. His most famous work, Etymologiae, is an encyclopedia of the universal knowledge of the time. He wrote many books on various topics ranging from grammar, geography, astronomy, mathematics, history, scripture, and monasticism. Among them, Chronica Majora, On the Nature of Things, De Differentiis Verborum, Questions on the Old Testament, On the Origin and Death of the Fathers, and On Church Duties.

"If a man wants to be always in God's company, he must pray regularly and read regularly. When we pray, we talk to God; when we read, God talks to us." – Isidore of Seville

Come back next week, as we continue looking at the Doctors of the Church, including Bernard de Clairvaux and Alphonsus Liguori.