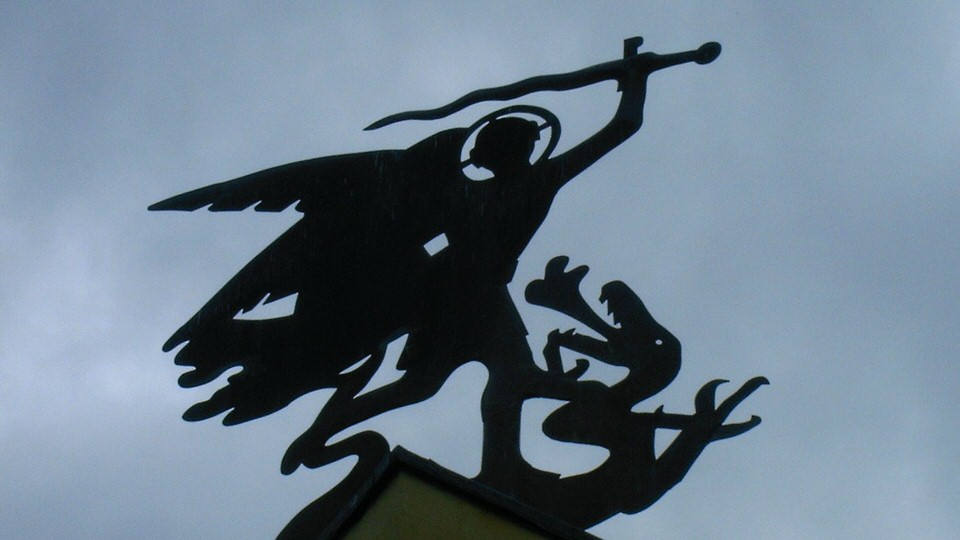 A weathervane from Valkenburg Castle in the Netherlands depicting St. Michael slaying the dragon, which represents Satan. Photo credit: P.J.L Laurens on Wikimedia Commons, used under the terms of license CC BY 3.0
Three weeks ago, we started by looking at why the belief in angels is a doctrine of the Catholic Faith. Two weeks ago, we learned about archangels and also about the belief in personal guardian angels. Last week, we learned more about the hierarchies of angels. Which leads us to say a few things about the fallen angels. Our Catholic Tradition also teaches that some angels rebelled against God. Satan, the devil is one of them. The Catechism of the Catholic Church says:

The Church teaches that Satan was at first a good angel, made by God: "The devil and the other demons were indeed created naturally good by God, but they became evil by their own doing." (CCC #391, quoting the Lateran Council IV (1215): DS 800.)

This teaching points to the fact that angels have free will.** However, once their choice to reject God is made, that choice is irrevocable. Quoting St. John Damascene, the Catechism says:

St. Paul writes that there are angels who will be judged (1 Corinthians 6:3) and both 2 Peter 2:4 and Jude 1:6 refer to angels who have sinned and await punishment. So, indeed, Satan, the devil, also known as Lucifer, was created as an angel. Our tradition holds that he was one of the cherubim (see Ezekiel 28: 13-16) but rebelled and took a third of all the angels with him (Revelation 12:4).  It is in the Book of Enoch (that I mentioned last week) where the idea of fallen angels is first found, and the belief also exists in both Judaism and Islam. In Christianity, we base the idea on a few passages in Scripture. In Luke 10:18, Jesus mentions to the disciples that he saw "Satan falling from heaven". And in Matthew 25:41, in talking about separating the sheep and the goats, he says that some will be thrown into the eternal fires that are prepared for the devil and his angels. In the Book of Revelation (as we saw last week), Satan is defeated by Michael and his angels:

Both Origen and Tertullian, our Church Fathers, in the 2nd century made the connection between the fallen morning star of Isaiah 14:12 and Satan. Isaiah writes concerning Babylon, but this passage is traditionally understood to be referring to the fall of Satan:

All your pomp has been brought down to the grave, along with the noise of your harps; maggots are spread out beneath you and worms cover you. How you have fallen from heaven, morning star, son of the dawn! You have been cast down to the earth, you who once laid low the nations! You said in your heart, “I will ascend to the heavens; I will raise my throne above the stars of God; I will sit enthroned on the mount of assembly, on the utmost heights of Mount Zaphon. I will ascend above the tops of the clouds; I will make myself like the Most High.” But you are brought down to the realm of the dead, to the depths of the pit. (Isaiah 14:11-15)

According to Ezekiel, Satan was created blameless but because of his wickedness and pride, he was thrown down to the earth:

You were blameless in your ways from the day you were created till wickedness was found in you. Through your widespread trade  you were filled with violence, and you sinned. So I drove you in disgrace from the mount of God, and I expelled you, guardian cherub, from among the fiery stones. Your heart became proud on account of your beauty, and you corrupted your wisdom because of your splendor. So I threw you to the earth; I made a spectacle of you before kings. (Ezekiel 28:15-17)

Satan was a guardian cherub who was beautiful, splendorous, and wise. But his heart became proud. He desired to make his throne higher than the throne of God and to make himself like God. He was filled with violence and sinned. And so he was driven in disgrace from the mount of God. St. Jerome, in working on the Latin version of the Bible, translated Isaiah's "morning star" as "Lucifer" (Quomodo cecidisti de caelo, Lucifer, qui mane oriebaris?) and gave us this name for the leader of the fallen angels. You can read more about the devil by checking out Deacon-structing the Devil. St. Thomas Aquinas writes that demons are also arranged in a hierarchy similar to angels. But we do not know what that hierarchy is: "There are two cities, that is, two societies, one of the good angels and men, the other of the wicked" (Summa Theologiae, First Part ,Question 108). In the next question (109), he merely concludes that even if these angels fell from one of the angelic spheres, one cannot conclude that as demons they have the same hierarchy, and since "disorder belongs to evil", therefore "in the bad angels there are no orders". Demons, just as angels, are real. Just as angels are mentioned in Scripture, so are the devil and demons. In the Lord's Prayer, we ask to be delivered from evil.  The Catechism makes clear that, "In this petition, evil is not an abstraction, but refers to a person, Satan, the Evil One, the angel who opposes God. The devil (dia-bolos) is the one who 'throws himself across' God's plan and his work of salvation accomplished in Christ" (CCC#2851). There is a battle for our souls. The devil wants to disrupt God's plan for us. Spiritual warfare is not something that is taking place up in the Heavens between angels and demons; it is happening right here, right now, for your soul. St. Paul refers to this when writing to the Ephesians:

Perhaps the image of Fred Flintstone with an angel whispering into his right ear, while a demon is whispering into his left ear, is an appropriate one. Demons can lead us astray; angels can light our way. Demons wish us harm; angels wish to protect and defend us. Demons seek to confuse us; angels seek to guide us and steer us towards God's will. St. Bernard, in a homily for the Feast of Guardian Angels,  says:

Even though we are children and have a long, a very long and dangerous way to go, with such protectors what have we to fear? They who keep us in all our ways cannot be overpowered or led astray, much less lead us astray. They are loyal, prudent, powerful. Why then are we afraid? We have only to follow them, stay close to them, and we shall dwell under the protection of God’s heaven. (From a sermon on Psalm 91 by St. Bernard of Clairvaux.  It appears in the Office of Readings for October 2, the memorial of the Guardian Angels.)

Let's be thankful to God for the gift of angels, his messengers, who surround us and have been given charge over us to guard us in all of our ways (see Psalm 91:11). Write to me to tell me about your thoughts and experiences with angels and maybe we can dedicate another post to your angelic stories. -- This post is part 4 of a series: Deacon-structing Angels: What Does the Bible Say? Archangels and Guardian Angels What the Catechism Says Fallen Angels   **The question as to whether angels have free will is addressed by Aquinas. Last week I mentioned that Aquinas concludes that angels have no free will since they exist only "to do the will of God". However, when he contemplates on the reality of demons or fallen angels, he has to consider that, at least once, these angels had free will in order to choose to reject God. One possibility is that at the moment of creation, angels have the ability to choose, but once that choice is made, it is irrevocable. Another possibility is that angels do have free will, but even if their will is free, once they have chosen God and live in His presence, why would they change their minds?