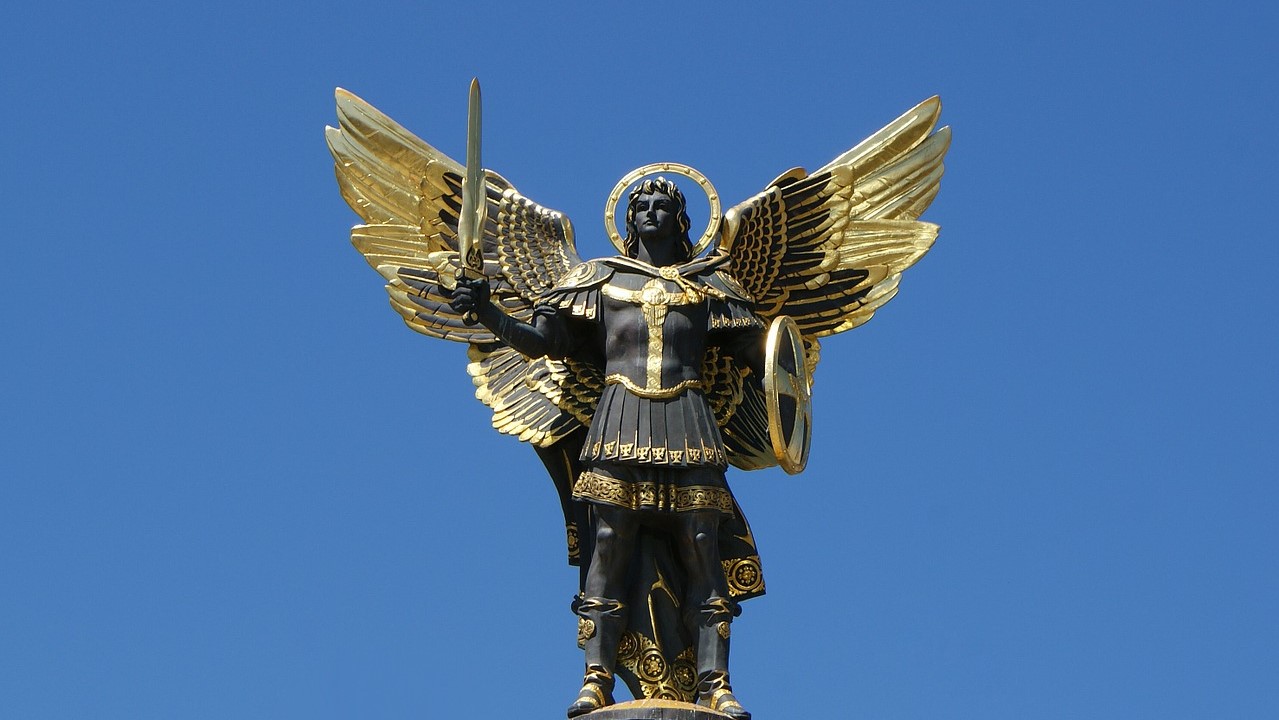 Statue of St. Michael the Archangel from the Lach Gates in Kiev, Ukraine. Photo credit: Image by Jørgen Deleuran from Pixabay
Last week we learned that belief in angels is a doctrine of the Catholic Church. Their existence was dogmatically declared by the Fourth Lateran Council in 1215. As a divinely revealed truth in Scripture, all believers must accept that angels exist. The Catechism calls it a truth of faith (CCC # 328). Because tomorrow, September 29, is the Feast of Michael and the Archangels and October 2 is the Memorial of the Guardian Angels, I will say a few things about these two categories and then next week we can see why the Church has a tradition of a hierarchy of angels.

Even though the only angel who is called an “archangel” in Scripture is Michael (Jude 1:9), Christian tradition holds that there are seven archangels. Their names vary depending on where you look, but the three that are always mentioned are Michael, Gabriel, and Raphael. In Catholic Tradition, the only archangels are these three, as these are the only ones mentioned in the Canon of Scripture.  Pope St. Gregory, the Great, in a homily explained that angels who proclaim messages of supreme importance are called archangels. Raphael appears in the Book of Tobit, and he describes himself as “one of the seven angels who stand in the presence of God” (Tobit 12:15). Gabriel also says, “I stand in the presence of God,” when he appears to Zechariah (Luke 1:19). It is the book of Revelation that explains that there are “seven angels who stand in the presence of God” (Revelation 8:2). It is the non-canonical Book of Enoch, however, a book found in the Dead Sea Scrolls and considered canonical in the Bible of the Ethiopian Orthodox Church, that lists the other four archangels: Raguel, Remiel, Saraqael, and Uriel (Enoch 20:1-8). The 2nd Book of Esdras, also considered non-canonical in the Catholic Church, mentions Uriel as one of the archangels. Several Jewish apocryphal books mention the archangels Michael, Gabriel, Uriel, Raphael, and Joel. In the Catholic Church, Michael is defender and protector. He is usually portrayed slaying the serpent or dragon (see Revelation 12:7-9). We are all likely familiar with the Prayer to St. Michael: “defend us in battle; be our protection against the wickedness and snares of the devil…” It was St. Basil who, in a sermon, placed Michael above all the other angels, and this devotion  began to grow in the Western Church in the 6th century. He is considered the spiritual warrior who is leader of God’s army. The Book of Daniel mentions that he is the protector of Israel (10:13, 21; 12:1). His name means “Who Is Like God”. Gabriel is probably the best known archangel because of his role in the Annunciation (Luke 1:26). Did you know that Gabriel also appears twice in the Book of Daniel (8:16 and 9:21). He is mentioned by name as one who helps Daniel interpret his visions. In Islam, Gabriel is the angel who was sent to the Prophet Mohammad (the angel Jibril in Arabic). In Jewish tradition, alongside Michael, Gabriel is described as the Guardian Angel of Israel. His name means “God Is My Strength”. Raphael is the healer. He appears prominently in the Book of Tobit but is also popularly considered to be the angel who stirs the waters of the Pool of Bethesda, mentioned in John 5. His name means “God Heals”. In Tobit he disguises himself and calls himself Azarias. He confesses to Tobit and Tobias:

“When you and Sarah prayed to the Lord, I was the one who brought your prayers into his glorious presence. I did the same thing each time you buried the dead. On the day you got up from the table without eating your meal in order to bury that corpse, God sent me to test you. But he also sent me to cure you and to rescue your daughter-in-law, Sarah, from her troubles. I am Raphael, one of the seven angels who stand in the glorious presence of the Lord, ready to serve him” (Tobit 12: 12-15).

In Catholicism we refer to Michael, Gabriel, and Raphael as “saints”, but this does not indicate that they are canonized saints; they are angels, spiritual beings. The title “saint” or "holy one", is merely an honorific to denote their holiness and closeness to God. Guardian Angels. In Exodus 23:20, God says to the people of Israel: “Behold, I send an angel before you, to guard you on the way and to bring you to the place which I have prepared.” Psalm 91:11 describes our belief: “For he will command his angels concerning you to guard you in all your ways.” Jesus also refers to them when he says, "See that you despise not one of these little ones: for I say to you, that their angels in heaven always see the face of my Father who is in heaven" (Matthew 18:10). But it is in the Book of Acts where the belief of a personal angel is mentioned: When Peter is freed from jail (by an angel) and arrives at the house of Mary the mother of John Mark, when the servant Rhoda runs to tell everyone that Peter is at the door, they respond that it could not be so and said, “It must be his angel" (See Acts 12:12-15). While specific belief in guardian angels in itself is not an article of faith, this belief can be traced as far back as that passage in Acts that I just quoted. The Catechism quotes St. Basil in saying that:

And St. Jerome said, “How great the dignity of the soul, since each one has from his birth an angel commissioned to guard it” (Comm. in Matt., xviii, lib. II). St. Thomas Aquinas also taught that our angels can influence our thoughts and imaginations, “enlighten the mind and change the will.” (See Summa Theologiae First Part, Question 111, Articles 1-4.) On October 2, 2014, Pope Francis, said in his morning meditation at daily Mass, “We all have an angel who is always beside us, who never abandons us and helps us not to lose our way.... We all have an angel with us, who protects us and helps us understand things.”  He encouraged us by saying, “No one journeys alone and no one should think that they are alone.” He then asked us to consider, “How is my relationship with my guardian angel? Do I listen to him? Do I say good morning to him? Do I ask him to watch over me when I sleep?" He concluded his message by asking us to answer those questions and so evaluate “the relationship with this angel that the Lord has sent to guard me and to accompany me on the path, and who always beholds the face of the Father who is in heaven”. And so it is perfectly right that we should pray to angels: If you need protection, ask Michael to come to your aid. If you need healing, ask Raphael for help. If you need clarity in what God is calling you to, go to Gabriel. It is perfectly right to pray to our guardian angel and all angels, to ask for guidance and protection and to guard us in all of our ways.

Angel of God, my guardian dear, to whom God's love commits me here, ever this day, be at my side, to light and guard, rule and guide. Amen.

Write to me to tell me about your thoughts and experiences with angels and come back next week for another post about angels so we can see what our Catechism has to say.