Deacon-structing Angels: What Does the Bible Say? 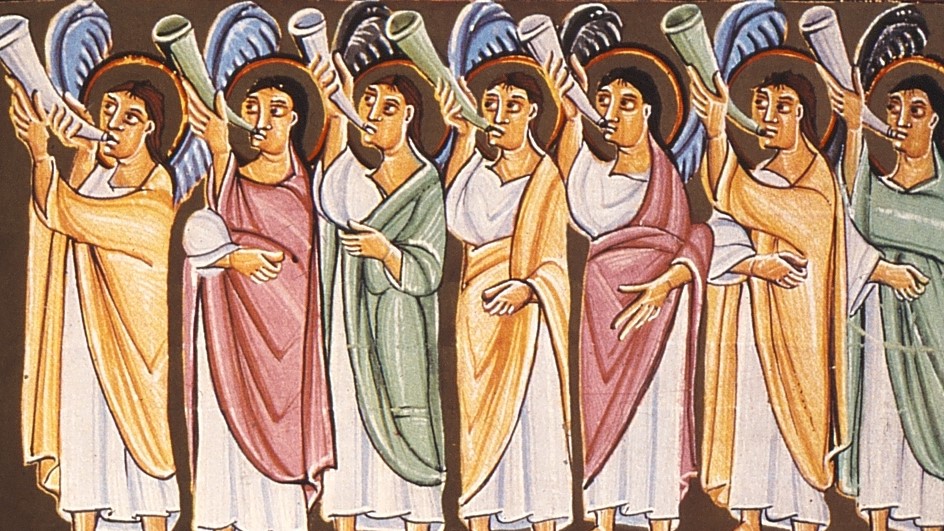 "And I saw that the seven angels who stood before God were given seven trumpets" (Revelation 8:2). Image from the 11th-century Bamberg Apocaplyse manuscript (Source: Wikimedia Commons)
A few months ago I received a message from a reader, asking that we deacon-struct angels. I’ve been thinking about it since and waiting for the right time. Since the Feast of the Archangels is coming up on September 29 and October 2 is the Memorial of the Holy Guardian Angels, I thought this would the perfect time to learn something new. And it is new, at least for me. It turns out the Church has been celebrating guardian angels since the 16th century and observing the Feast of the Archangels, also known as Michaelmas (more on that next week), since the 5th century. But I can’t think of angels without thinking of Sarah McLaghlan’s song “Angel”, Real Life’s “Send Me an Angel”, or the Christmas classic by Alabama, “Angels Among Us”. And who did not love sitting once a week in front of the TV for Highway to Heaven with Michael Landon or Touched by an Angel with Roma Downey?  Then there are all those fun films about angels: Angels in the Outfield, All Dogs Go to Heaven, City of Angels, and Heaven Can Wait. And, who doesn’t love the most famous of all fictional angels, Clarence, from the classic It’s a Wonderful Life? Angels are so ingrained in our popular culture that I never really thought of how integral they are to our Catholic doctrine. Did you know that believing in angels is doctrinal? It is one of the truths of our Faith. Remember when we spoke about doctrine we spoke about divinely revealed truths? The Catechism of the Catholic Church says:

The existence of the spiritual, non-corporeal beings that Sacred Scripture usually calls "angels" is a truth of faith. The witness of Scripture is as clear as the unanimity of Tradition. (CCC #328)

For me this was a new revelation. We are so used to reading about angels in Scripture that I never really thought that these mentions in the Bible actually constitute divine revelation that angels are real. Jesus didn’t need to explicitly say, “Angels are real,” for us to glean from Scripture that they very much are. Angels have been around since creation and throughout salvation history (see CCC #332). The most famous angel in the Bible is probably Gabriel, “God is my strength”. He announces to Zechariah that Elizabeth will give birth to John the Baptist (Luke 1:8-20) and to Mary that she will be the mother of the Messiah (Luke 1:26-38). Did you know that he also appears in Daniel (8:16 and 9:21)? The other two archangels mentioned by name in Scripture are Michael, "One who is like God" (Daniel 10:13, 10:21, and 12:1, Jude 1:9, Revelation 12), and Raphael, “God has healed”, who appears in a very prominent role in the Book of Tobit. Angels appear in the Old Testament many times. Some more notable ones are: They are also mentioned many times in the Old Testament: See Exodus 23:20-22, 2 Samuel 14:17, Wisdom 16:20, Daniel 3:58, Job 38:7, and Job 4:15-18, as well as Psalm 34:8, Psalm 78:25, Psalm 78:49, Psalm 91:11, Psalm 103:20, Psalm 138:1, and Psalm 148:2. They also have prominent roles in the New Testament: Jesus himself mentions angels many times in casual conversation: They are also mentioned quite casually by Stephen (Acts 7:53), and Paul uses the belief in angels very cleverly in arguing the resurrection (Acts 23:8). St. Paul also mentions angels many other times: See Romans 8:38, 1 Corinthians 4:9, 1 Corinthians 6:3, Galatians 3:19, Colossians 2:18, 2 Thessalonians 1:7, 1 Timothy 3:16, and 1 Timothy 5:21. The author of Hebrews mentions angels at least four times (Hebrews 1:4-13, 2:2-16, 12:22, and 13:1-2), as does Peter in his letters (1 Peter 1:12 and 3:22, and 2 Peter 2:4 and 2:11) and Jude as well (Jude 1:6). It’s safe to say that the Bible presents a worldview where angels are very much a reality. St. Paul writes to the Colossians that in Christ “all things were created: things in heaven and on earth, visible and invisible, whether thrones or powers or rulers or authorities; all things have been created through him and for him” (Colossians 1:16). This reality is also expressed in the Nicene Creed where we profess that we believe that God is the “maker of heaven and earth, of all things visible and invisible” (see CCC # 325-327). Indeed we believe that angels are real. They are mostly unseen invisible creatures, created by God, through Christ and for Christ. The Catechism says, “The angels surround Christ their Lord. They serve him especially in the accomplishment of his saving mission to men” (CCC #351) and “The Church venerates the angels who help her on her earthly pilgrimage and protect every human being” (CCC# 352). Come back next week and let’s look more specifically at the work of angels.