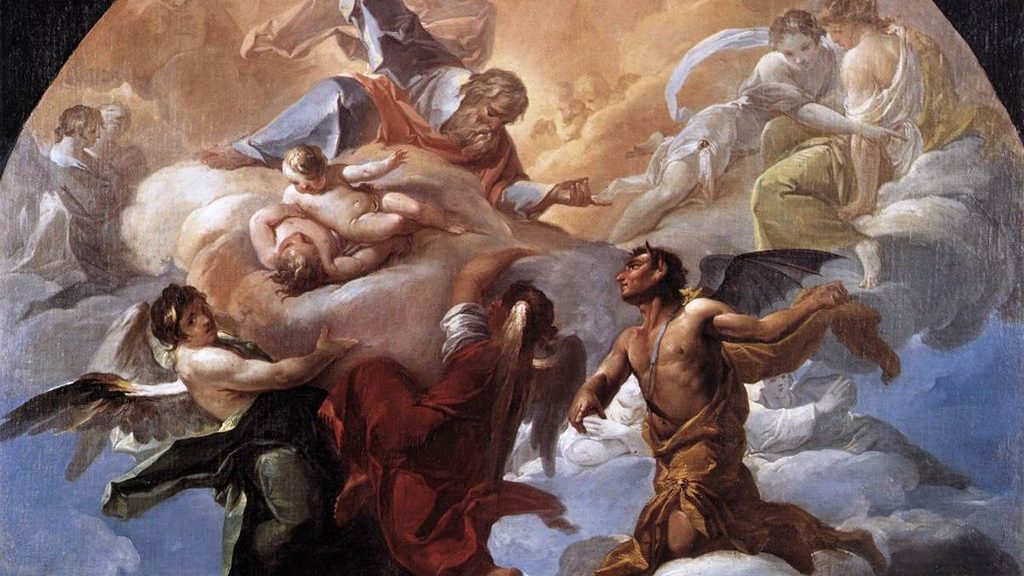 Satan Before the Lord by Corrado Giaquinto
Recently, while visiting with a priest friend, he commented on how Pope Francis keeps mentioning the devil, which led to a fascinating conversation about evil, demons, and exorcisms. Then last week another friend sent me an article about Emma Schmid, a truly remarkable (and almost unbelievable) story about possession. This led to a lunch-time conversation at work, which led me to think that this would be a good topic to deacon-struct. The Catholic Church is clear in her teaching: The devil does exist. And it’s worth understanding what the Church says about it and what the Church teaches about evil in general. In order to help me understand it all a little better, I went to where I usually go to understand Church teaching: to the Salt + Light TV series IN YOUR FAITH. Episode 10 of the first season deals with this very topic. The figure of Satan appears throughout Scriptures. We're all familiar with the Creation story and how the "serpent" tempted Eve (Genesis 3). Christian theology interprets this serpent as being Satan. The Catechism of the Catholic Church says that: “Behind the disobedient choice of our first parents lurks a seductive voice, opposed to God, which makes them fall into death out of envy” (CCC 391).

Scripture and the Church's Tradition see in this being a fallen angel, called "Satan" or the "devil".

Also in the Old Testament is the story of Job where Satan asks God whether Job would still be as faithful if he lost everything. God agrees to find out and allows the devil to bring evil into Job’s life (see Job 1:6-12). Satan is more prominent in the New Testament where he appears as the tempter of Jesus in the desert (Matt. 4:1-11; Mark 1:12-13 and Luke 4:1-13) and is mentioned numerous times (we’ll look at some of these later). The concepts of evil, hell, and the devil are formed in the Old Testament. By the time of the New Testament, those concepts had become an integral part of Christian theology, which describes a final victory of Christ over Satan and his dominions. And after that final victory, a final judgment will eternally consign Satan and his followers to Hell.

The Church teaches that Satan was at first a good angel, made by God.

The Catechism says: "The devil and the other demons were indeed created naturally good by God, but they became evil by their own doing" (CCC 391). Satan is believed to have been an archangel who turned against God before the creation of man. According to this view, Satan waged war against God, his creator, and was banished from Heaven because of this. This teaching is based on Ezekiel 28:12-19, which the Church interprets as referring to Satan. It says:

“You were the model of perfection, full of wisdom and perfect in beauty. You were in Eden, the garden of God; every precious stone adorned you.” (Ez 28:12b-13a)

That’s why we believe that the serpent in the Creation story is Satan. It goes on to say:

“You were anointed as a guardian cherub, for so I ordained you. You were on the holy mount of God.” (Ez 28:14a)

Whoever it is, it was really close to God:

“So I drove you in disgrace from the mount of God, and I expelled you, O guardian cherub. Your heart became proud on account of your beauty, and you corrupted your wisdom because of your splendor. So I threw you to the earth; I made a spectacle of you before kings. By your many sins and dishonest trade you have desecrated your sanctuaries. So I made a fire come out from you, and it consumed you, and I reduced you to ashes on the ground in the sight of all who were watching. All the nations who knew you are appalled at you; you have come to a horrible end and will be no more.” (28:16b-19)

The tradition of calling this fallen archangel "Lucifer" comes down to us from an ancient understanding of a certain passage in Isaiah 14:

How you have fallen from the heavens, O Morning Star, son of the dawn! How you have been cut down to the earth, you who conquered nations! (Isaiah 14:12)

Isaiah is writing about the fall of the king of Babylon, but some Church Fathers also understood it as referring to the devil. The person is addressed as "O Morning Star" - a reference to the planet Venus, which the Romans called "Lucifer", meaning "light-bringer". So that's how St. Jerome translated it into Latin and how "Lucifer" ended up in early English translations of the Bible. The King James version reads:

How are you fallen from heaven, O Lucifer, son of the morning! how are you cut down to the ground, who did weaken the nations!

Next week, let’s look at the figure of the devil in the New Testament. Send me your comments or questions: pedro@saltandlighttv.org. - In You Faith features Byron, Chantal and Rosanna, as they explore the Church’s teachings in a fast-paced and fun way, offering you a practical message, and giving you an opportunity to discuss what you have to say about what the Church has to say. In Your Faith can be purchased here.