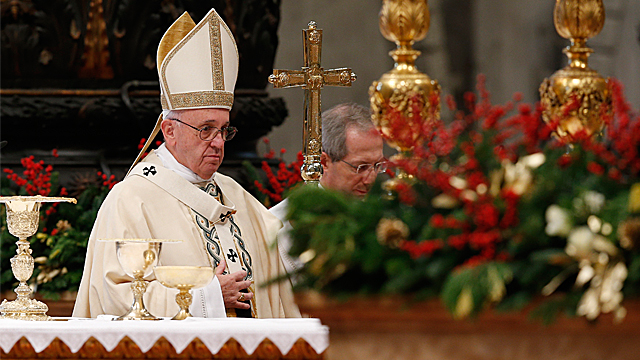 The words of the Prophet Isaiah – addressed to the Holy City of Jerusalem – arealso meant for us.  They call us to rise and go forth, to leave behind all thatkeeps us self-enclosed, to go out from ourselves and to recognize the splendour of the light which illumines our lives: “Arise, shine; for your light has come, andthe glory of the Lord has risen upon you” (60:1).  That “light” is the glory of theLord.  The Church cannot illude herself into thinking that she shines with her own light. Saint Ambrose expresses this nicely by presenting the moon as a metaphorfor the Church: “The moon is in fact the Church… [she] shines not with her ownlight, but with the light of Christ.  She draws her brightness from the Sun ofJustice, and so she can say: ‘It is no longer I who live, but Christ who lives inme’” (Hexaemeron, IV, 8, 32).  Christ is the true light shining in the darkness. To the extent that the Church remains anchored in him, to the extent thatshe lets herself be illumined by him, she is able to bring light into the lives ofindividuals and peoples.  For this reason the Fathers of the Church saw in her themysterium lunae.
We need this light from on high if we are to respond in a way worthy of thevocation we have received.  To proclaim the Gospel of Christ is not simply oneoption among many, nor is it a profession.  For the Church, to be missionarydoes not mean to proselytize: for the Church to be missionary means to giveexpression to her very nature, which is to receive God’s light and then to reflectit.  This is her service.  There is no other way.  Mission is her vocation; toshine Christ’s light is her service.  How many people look to us for thismissionary commitment, because they need Christ.  They need to know the faceof the Father.
The Magi mentioned in the Gospel of Matthew are a living witness to the fact thatthe seeds of truth are present everywhere, for they are the gift of the Creator,who calls all people to acknowledge him as good and faithful Father.  The Magirepresent the men and woman throughout the world who are welcomed into thehouse of God.  Before Jesus, all divisions of race, language and culturedisappear: in that Child, all humanity discovers its unity.  The Church has thetask of seeing and showing ever more clearly the desire for God which ispresent in the heart of every man and woman.  This is the service of the Church,with the light that she reflects: to draw out the desire for God present in everyheart.  Like the Magi, countless people, in our own day, have a “restless heart”which continues to seek without finding sure answers – it is the restlessnessof the Holy Spirit that stirs in hearts.  They too are looking for a star to show them the path to Bethlehem.
How many stars there are in the sky!  And yet the Magi followed a new anddifferent star, which for them shone all the more brightly.   They had longpeered into the great book of the heavens, seeking an answer to theirquestions – they had restless hearts –, and at long last the light appeared.   Thatstar changed them.   It made them leave their daily concerns behind and setout immediately on a journey.  They listened to a voice deep within, which led them to follow that light. It was the voice of the Holy Spirit, who works in allpeople.  The star guided them, until they found the King of the Jews in a humbledwelling in Bethlehem.
All this has something to say to us today.  We do well to repeat the questionasked by the Magi: “Where is the child who has been born the King of the Jews? For we observed his star at its rising, and have come to pay him homage” (Mt2:2).  We are impelled, especially in an age like our own, to seek the signswhich God offers us, realizing that great effort is needed to interpret them andthus to understand his will.   We are challenged to go to Bethlehem, to find theChild and his Mother.  Let us follow the light which God offers us – that tinylight.  The hymn in the breviary poetically tells us that the Magi lumen requiruntlumine – that tiny light.   The light which streams from the face of Christ, full ofmercy and fidelity.  And once we have found him, let us worship him with all ourheart, and present him with our gifts: our freedom, our understanding and ourlove. True wisdom lies concealed in the face of this Child.  It is here, in thesimplicity of Bethlehem, that the life of the Church is summed up.  For here isthe wellspring of that light which draws to itself every individual in the world andguides the journey of the peoples along the path of peace. 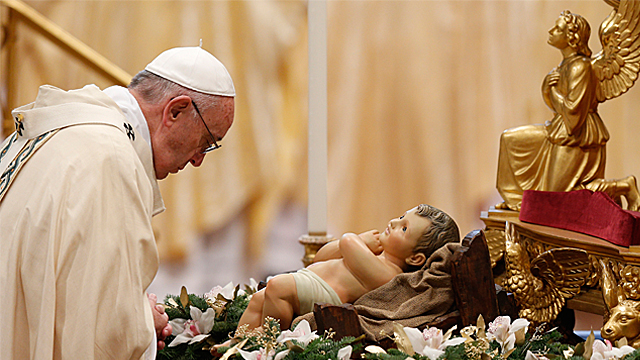