Why Querida Amazonia is a document for everyone 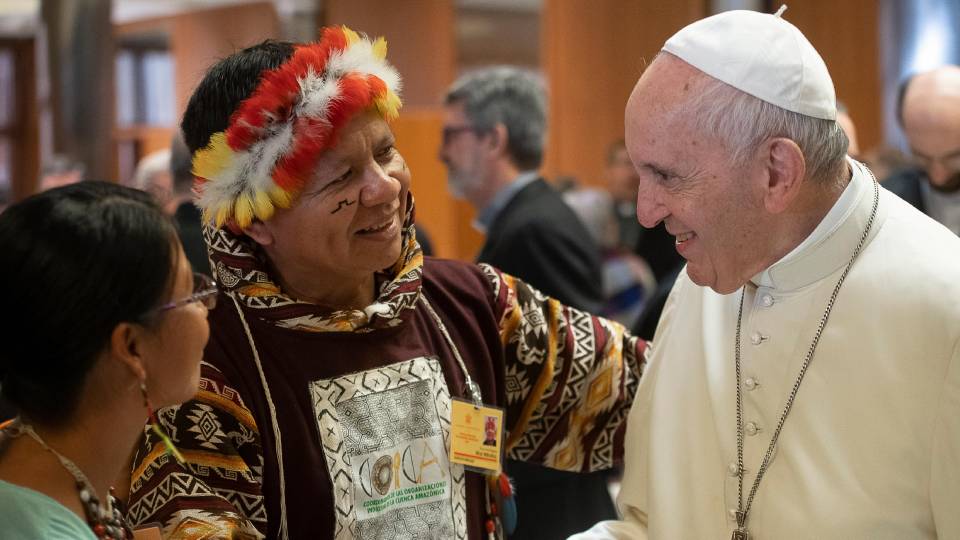 Pope Francis meets Jose Gregorio Diaz Mirabal, a member of the Curripaco indigenous community, during a session of the Synod of Bishops for the Amazon at the Vatican Oct. 8, 2019. (CNS photo/Vatican Media)
Last week, the Vatican released Pope Francis’ apostolic exhortation, Querida Amazonia, written as a reflection on the month-long Synod on the Pan-Amazon Region, which took place last fall. The synod looked at issues specific to the region, including the lasting effects of colonization and the challenge of serving isolated communities. The exhortation, however, is addressed “to the whole world”. Is that just a nice sentiment, or is there really something for everyone in Querida Amazonia? As someone who knows very little about the Amazon and the challenges facing the Church there, I was curious to find out. So I read it and discovered a document of great beauty and profound insight. Admittedly, much of what Pope Francis says here has been said before and by him. He does quote Laudato Si’ an awful lot, and also Evangelii Gaudium. But I don’t see that as a problem. In a sense, Querida Amazonia is a refining down of Laudato Si’. And although the exhortation avoids specific strategies (because these, of course, should be left to the local bishops and communities), Querida Amazonia does feel like the preparatory sketches for a blueprint, drawing on the architectural principles set out at greater length in Laudato Si’. But what can I, sitting in my open-plan office in the middle of a Canadian metropolis, gain from a document on the state of the Church in the South American rainforest? Quite a lot actually. The health of the Amazon region is important for the wellbeing of the global environment, and many of the issues discussed are applicable in other places, but the insights go even broader and deeper, sometimes surprisingly so. Here are some of the major points discussed in the document, which can serve as powerful food for thought for anyone in the world today.

This was a dominant theme in Laudato Si’ and one that a lot of people missed while they were too busy being gobsmacked that a pope would write in support of care for our environment. When we cease to care for the environment, when we place personal profit above the wellbeing of Creation, it is not just the plants and animals that suffer. People who live in poorer regions of the world and at the margins of our society are the ones to suffer most from the destruction of land, the pollution of water, and drastically changing weather patterns. And in a place like the Amazon where people have a greater understanding of and connection to nature, such environmental degradation strikes at the root of their culture and their very identity – what they value and how they understand themselves and their place in Creation. It all starts with a mentality. When we live with a worldview of individualist consumerism, when we give in to greed and self-centredness and the distractions which help us avoid seeing our vices, the result is our current “throwaway culture” and the destruction of species, ecosystems, persons, and cultures. Even when we decide we want to espouse a cause, we often do so to the exclusion of all others, even though they are connected to ours – in the way, for example, certain larger, more visible species under threat get more attention than fungi and insects, though they are all part of one vast, intricately interconnected ecosystem (QA 49). Pope Francis challenges us to see the bigger picture.

2. The voices we are not used to hearing are the ones we most need to listen to.

In our world, we are used to the idea that “might makes right”. We may not express it precisely in those terms, but it is this notion that dominates our way of thinking and living, that drives our society and our economy. We listen to the voices which are loudest and strongest. And the people with the most money usually get their way. But Pope Francis says, as he has said before, that we must listen to the poor and the marginalized – not merely as another party seated at the table but as “the most authoritative voice at any table of dialogue” (QA 26). He is speaking here, of course, specifically about the Amazon, but these words could be applied to almost any part of the world – and they should be. If you would like to see an example of this kind of authority of the poor in action in our own backyard, I encourage you to watch the Salt + Light Media original documentary, Magisterium of the People. But Pope Francis also does something which surprised me. He quotes extensively from secular sources – from poetry, to be precise. In doing so, he brings yet another voice to the conversation, one we are not used to hearing. He recognizes the gift of the poet to see beyond, and he hears the voice of the prophet, the voice we Christians must have because we are called by our very nature to be a prophetic people. And he challenges us to expand our vision, to see the world as God sees it, and to truly be the people of the Gospel.

3. Dialogue is key to a healthy identity.

“Identity and dialogue are not enemies. Our own cultural identity is strengthened and enriched as a result of dialogue with those unlike ourselves. Nor is our authentic identity preserved by impoverished isolation” (QA 37). That line struck me so forcefully when I read it. I not only highlighted it, but I marked it with a star and an exclamation mark. And it’s a point he returns to more than once. Of course we’ve heard it before, and most of us know that it’s true. It’s why we study other cultures, past and present. It’s why the work of primatologists like Jane Goodall is so fascinating. Because in knowing what we are not and in open, loving acceptance of and encounter with the other, we come to a better understanding of ourselves. Of course we know this. But we need to hear it again. It needs to be said in this day and age when there is so much fear of the other, exacerbated by the loud voices coming from our TV screens and our social media echo chambers. Pope Francis challenges us to let go of our fears and to enrich ourselves through encounter with those who have so much to offer us through their very difference.

4. Our Church is a living Church.

Pope Francis goes on to apply this understanding of the mutuality of dialogue and identity to the Catholic Church. The Church is not an institution. It is a Body, a living thing. And by definition, living things grow and change. The Church is not a museum, as he is fond of telling us. Because the Church has the capacity – and the mission – to encompass all of humanity, as she draws more and more people to herself, and as time passes, there will be changes to the way she looks, the way we are used to seeing her. But we should not be afraid of this apparent change. It is growth. It is the Church becoming, fulfilling her purpose to lift humanity up to God. We should not be afraid. This is the Church fulfilling the purpose for which Jesus Christ created her. People and cultures entering the fold of the Church are not changed; they are fulfilled. And it is a two-way street. The Church, through the Sacraments and especially the Eucharist, lifts them up beyond their mere humanity, and they, in turn, join their individual richnesses to the wealth of the Church’s human face. This is what it means for a people or a culture to become part of the Church – that they become integrated and fulfilled, not robbed of their identity. It is the incarnation of grace (QA 77). Here I want to stop a moment and really encourage you to read chapter four of Querida Amazonia, titled “An Ecclesial Dream”. Because it is not politically correct and because many people are focused on practical matters, such as the lack of any overt mention of married clergy, I expect that this profound and intensely spiritual expression of the Church’s mission will be largely overlooked. But it is moving and uplifting and most definitely worth the time it takes to read it.

5. Women already play a vital and irreplaceable role in the Church.

This was my favourite section (“The strength and gift of women”, 100-103). Probably because I am a woman. Probably because Pope Francis says what I’ve been saying but more beautifully and with greater authority. Probably also because he is so perfectly in line with what the Church has already taught (I’m thinking especially of John Paul II’s Mulieris Dignitatem), giving the lie to so many people who (often unintentionally) increase strife within our Church by voicing fears and concerns that he is planning to upend everything we hold dear. I don’t think he says anything new in this section. What is significant is that he says it now, at this moment in the history of the Church when we really need to hear it again. There is a tendency in our culture to see women historically as poor, downtrodden beings who could achieve so much more if only there were allowed to be more like men, and this ideology has crept into the Church – most visibly in movements for the ordination of women. But the Catholic Church has consistently recognized that the liberation of women lies not in making them men but in understanding and valuing the roles they already play in society and in the Church, roles that are often seen as second-class (probably – in that vicious cycle of thinking – because they are roles which traditionally belong to women). This is not to negate the immense strides taken in our society toward freeing women from stereotypes and unfair limitations. But there is no sense in exchanging one ideological prison for another and thereby impoverishing ourselves and all of humanity. Pope Francis sees, and the Church sees, what so many people cannot: that women are powerful as women, here and now, in a way that is uniquely theirs, and that they have a mission which belongs to them as women. Take that away, and our Church and our society will fall to pieces (QA 101).   Querida Amazonia is a beautifully insightful and profoundly spiritual document. I’ve highlighted here the major points which spoke to me most, but I encourage you to read it for yourself.