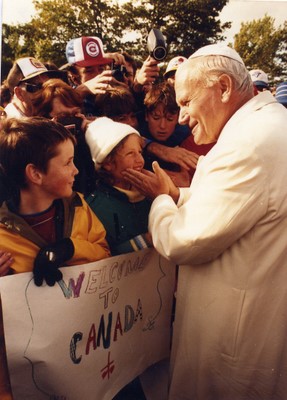 Twenty five years ago this week Pope John Paul II became the first pontiff to set foot on Canadian soil. In 12 days he criss-crossed the country drawing enormous crowds wherever he went. From east to west he called Canadians to follow Christ, and by his own example made sure that Canadians met Christ through him. Tonight, join Salt+Light Television as we look back on that historic voyage, the memories and the legacy of that voyage. Guests include David Knapp, head of the Host Broadcast team that provided 120 hours of live coverage to Canadians, Bishop Emeritus John Michael Sherlock of London who was president of the Canadian Conference of Catholic Bishops in 1984, and Marie and Jennifer Brunelle, one of the mother-daughter pairs that gave John Paul II a historic tour of Sainte Marie among the Hurons in Midland. John Paul II and Canada: A 25th Anniversary airs Thursday, September 10th at 8:30 pm ET.