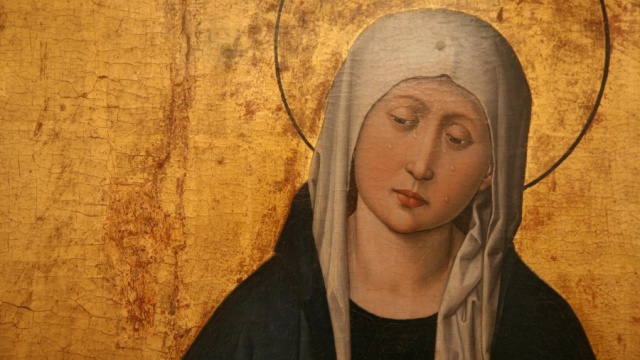 Last week we looked at that beautiful prayer that Catholics love: The Rosary. I hope that the story about St. Dominic has made a difference in your approach to praying the Rosary. This week we also have another Marian Feast day: Our Lady of Sorrows on September 15. Why do you think we have so many names or titles for Mary? Our Lady of Guadalupe, Star of the Sea, Queen of Heaven, Mother of Mercy, Mother of Victory, Queen of Peace… I’m sure you can come up with a lot more. Some of this has to do with reported apparitions of Mary throughout the ages. Of the thousands of reported apparitions of the Virgin Mary, only 22 have been officially approved by the Church, either universally or by the local Church. The messages are consistently requesting people to return to prayer, repentance and the Sacraments. We’ve heard of many of them; Guadalupe, Lourdes and Fatima are probably the best known. Our Lady of Guadalupe

In 1531, a "Lady from Heaven" appeared to a peasant, by the name of Juan Diego just outside of Mexico City. She said to him: "Know for certain that I am the perfect and perpetual Virgin Mary, Mother of the True God" and instructed him to have the bishop build a temple on the site. As proof she left an image of herself imprinted miraculously on his tilma (blanket), which was a poor quality cactus-cloth. It should have deteriorated in 20 years but shows no sign of decay almost 500 years later and still defies all scientific explanations of its origin. In less than 20 years, some 9 million Mexicans were converted to Christianity. Yearly, an estimated 10 million pilgrims visit the Basilica, making Guadalupe the most popular Marian shrine in the world, and the most visited Catholic church in the world next to the Vatican. Our Lady of the Miraculous Medal

On November 27, 1830, Mary appeared in silence to Saint Catherine Labouré and showed her the image of a medal she wished to have her make. An image of our Lady was on the medal with streams of light pouring from rings on her fingers. Around the figure of Our Lady, these words were inscribed: 'O Mary conceived without sin, pray for us who have recourse to thee.' On the reverse side was the letter M and a cross. Mary told St. Catherine that “all who wear this medal will receive great graces.” This means that even though the graces are won by Christ, Mary has the power to intercede and obtain answers to our prayers through the action of her Son. This medal came to be called 'the Miraculous Medal,' because of the many miracles associated with its wearing. Our Lady of Lourdes

In 1858, four years after the dogma of the Immaculate Conception was proclaimed, Mary appeared to a very poor young girl, Bernadette Soubirous, eighteen times in Lourdes, France. Our Lady revealed to the uneducated Bernadette, 'I am the Immaculate Conception.' Because the dogma had been officially proclaimed less than four years earlier, and Bernadette could not even have known of its existence, great credibility was given to Bernadette by her repetition of the Blessed Mother's word. In addition, Bernadette was told by Mary to begin digging in the ground; she obediently did so, and water immediately began flowing from the spot where Bernadette dug, a tiny stream that since has grown to the size of a small river. Thousands of healings have been reported as the result of bathing in or drinking this miraculous water. The walls of the grotto are lined with the crutches of the lame that have walked away from the waters, totally healed. Our Lady of Fatima

Perhaps is the key Marian apparition of the Twentieth Century is the one that occurred in Fatima in 1917. Mary appeared six times to three shepherd children, Lucia, Jacinta and Francisco. Mary told them that that Heaven would grant peace to the entire world if Her requests for prayer, reparation and consecration were heard and obeyed. It’s easy to see all of this as an outsider and conclude that Catholics worship Mary. A poignant moment from my friend Cimela Kidonakis’ documentary on Medjugoje, Apparition Hill, has someone saying that there are all these people over here around the statue of Mary and not one person over there by the statue of Jesus. We must remember that for a Marian apparition to be real, the focus has to be Jesus and not Mary. As I’ve written before, Mary wants nothing more than to lead us to her son, Jesus. The Church does not require belief or acceptance of any of these apparitions, even if they are officially approved by the Church. The Church merely says what she says about any devotion, “if it leads you to Christ, great.” The Church also, even for the apparitions that are universally approved, considers all of them as "private revelation." Which is why the Church has to be very careful with all these phenomena. In this, we need look no further than the Catechism of the Catholic Church:

"The Christian economy, therefore, since it is the new and definitive Covenant, will never pass away; and no new public revelation is to be expected before the glorious manifestation of our Lord Jesus Christ. Yet even if Revelation is already complete, it has not been made completely explicit; it remains for Christian faith gradually to grasp its full significance over the course of the centuries. Throughout the ages, there have been so-called "private" revelations, some of which have been recognized by the authority of the Church. They do not belong, however, to the deposit of faith. It is not their role to improve or complete Christ's definitive Revelation, but to help live more fully by it in a certain period of history. Guided by the Magisterium of the Church, the sensus fidelium knows how to discern and welcome in these revelations whatever constitutes an authentic call of Christ or his saints to the Church. Christian faith cannot accept "revelations" that claim to surpass or correct the Revelation of which Christ is the fulfillment, as is the case in certain non-Christian religions and also in certain recent sects which base themselves on such "revelations." (CCC #66-67)

This is one of the main reasons why the Church may not be able to approve an apparition until they are reportedly ended. At the same time, they can be approved by the local bishop and not be approved by the universal Church. Or they may be recognized by the Eastern or Orthodox Churches. One question that I have and have not found an adequate response for is one that no one seems to be asking: "Why does Mary appear?" Sure she cares about us like a mother and wants to warn us about certain things or remind us of certain things, but why Mary? Why not Jesus himself? Why not other saints? Why does God allow Mary to appear? Or rather, why does God send Mary? Perhaps the answer is found in the story of the Visitation (Luke 1:39-56) where Mary is the first to be 'sent' to someone with the Good News of Jesus Christ. After all, Mary is really the first missionary in that sense. Maybe some of you have the answer to this question. If you do, please share. I think, again, the main thing to keep in mind is that our Faith cannot depend on private revelations or supernatural phenomena. If they help us and nourish our Faith and lead us to Christ and ultimately to Heaven – and do not contradict the basic tenets of our Catholic Faith, then Mary herself would be the first to approve. Next time let's explore some other titles of Mary. - The Sorrow of Mary detail of the Descent of the Cross from the 15th century Stauffenberg Altarpiece. The author of this 15th century altarpiece from Alsace is anonymous.