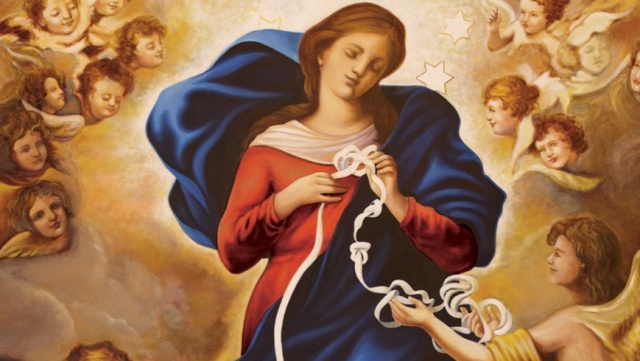 Last week, we reflected a bit about Mary and especially on what it means that she is “Full of Grace”. Perhaps the best reflection on this is from Munificentissimus Deus, the Apostolic Constitution of Pope Pius XII that I mentioned last week, on the Assumption of the Blessed Virgin Mary. This excerpt is taken from the Office of Readings for the Feast of the Assumption:

Your body is holy and glorious In their sermons and speeches on the feast day of the Assumption of the Mother of God, the holy fathers and the great doctors of the church were speaking of something that the faithful already knew and accepted: all they did was to bring it out into the open, to explain its meaning and substance in other terms. Above all, they made it most clear that this feast commemorated not merely the fact that the Blessed Virgin Mary did not experience bodily decay, but also her triumph over death and her heavenly glory, following the example of her only Son, Jesus Christ. Thus St John Damascene, who is the greatest exponent of this tradition, compares the bodily Assumption of the revered Mother of God with her other gifts and privileges: "It was right that she who had kept her virginity unimpaired through the process of giving birth should have kept her body without decay through death. It was right that she who had given her Creator, as a child, a place at her breast should be given a place in the dwelling-place of her God. It was right that the bride espoused by the Father should dwell in the heavenly bridal chamber. It was right that she who had gazed on her Son on the cross, her heart pierced at that moment by the sword of sorrow that she had escaped at his birth, should now gaze on him seated with his Father. It was right that the Mother of God should possess what belongs to her Son and to be honoured by every creature as the God’s Mother and handmaid." St Germanus of Constantinople considered that the preservation from decay of the body of the Mother of God, the Virgin Mary, and its elevation to heaven as being not only appropriate to her Motherhood but also to the peculiar sanctity of its virgin state: "It is written, that you appear in beauty, and your virginal body is altogether holy, altogether chaste, altogether the dwelling-place of God; from which it follows that it is not in its nature to decay into dust, but that it is transformed, being human, into a glorious and incorruptible life, the same body, living and glorious, unharmed, sharing in perfect life." Another very ancient author asserts: "Being the most glorious Mother of Christ our saviour and our God, the giver of life and immortality, she is given life by him and shares bodily incorruptibility for all eternity with him who raised her from the grave and drew her up to him in a way that only he can understand." All that the holy fathers say refers ultimately to Scripture as a foundation, which gives us the vivid image of the great Mother of God as being closely attached to her divine Son and always sharing his lot. It is important to remember that from the second century onwards the holy fathers have been talking of the Virgin Mary as the new Eve for the new Adam: not equal to him, of course, but closely joined with him in the battle against the enemy, which ended in the triumph over sin and death that had been promised even in Paradise. The glorious resurrection of Christ is essential to this victory and its final prize, but the blessed Virgin’s share in that fight must also have ended in the glorification of her body. For as the Apostle says: "When this mortal nature has put on immortality, then the scripture will be fulfilled that says “Death is swallowed up in victory”." So then, the great Mother of God, so mysteriously united to Jesus Christ from all eternity by the same decree of predestination, immaculately conceived, an intact virgin throughout her divine motherhood, a noble associate of our Redeemer as he defeated sin and its consequences, received, as it were, the final crowning privilege of being preserved from the corruption of the grave and, following her Son in his victory over death, was brought, body and soul, to the highest glory of heaven, to shine as Queen at the right hand of that same Son, the immortal King of Ages.

Pope Pius XII explains it much better than I did last week. In particular, I am intrigued by the fact that he writes that this “dogma” of the Assumption was something that the faithful already knew and believed. The Doctors of the Church didn’t come up with it. The Pope didn’t wake up one morning having had this revealed to him in a dream. That’s not how dogma works. We speak of Tradition, so it makes perfect sense that it would have been something that the faithful, the people, already knew and believed. It was probably a belief that dated back to the time just after Mary lived. The belief in the Assumption was already part of the Tradition of the Church in 1950 when Pope Pius XII declared it a Dogma. Which leads me to the question about “praying” to Mary. While Mary was alive people probably went to her in order to get to Jesus. So why not continue to do that today? A lot of people think that Catholics worship Mary or that Mary is like some sort of God. But that's not true. We don't worship her; we honour her. We don't pray to her; we ask for her prayers. People ask me for prayers all the time, as if my diaconal prayers have more weight than their own. I’m not as close to God as Mary is, so why not ask for her prayers too? Don’t you think, if Mary asks Jesus for something that he's not going to listen? Why not go straight to God? Well, you can and you should. Absolutely, pray to God! But if your praying could use some help, why not ask for it? If you ask me to help you with your prayers, why not ask Mary? We believe that Mary has a very special relationship with God and so her intercession for us is effective. We also believe that because Mary is close to God, she can teach and guide us in our relationship with God. This is why we revere her. This is why she is “august”. We don’t worship Mary; we revere her the way you would revere a Grandmother that you loved. We honour her because Jesus himself honours his mother. We don’t pray to Mary; we ask for her prayers, for her intercession. We ask her to pray for us. Next week we’ll look at that prayer that everyone loves: The Rosary. - Image: Mary, Un-doer (or Un-tier) of Knots. This beautiful dev

otion asks Mary to take all our knots and untie them, one by one. The concept of Mary untying knots is derived from a work by St. Irenaeus of Lyons, Adversus haereses (Against Heresies). In Book III, Chapter 22, he presents a parallel between Eve and Mary, describing how "the knot of Eve's disobedience was loosed by the obedience of Mary. For what the virgin Eve had bound fast through unbelief, this did the virgin Mary set free through faith." The painting is by Johann Georg Melchior Schmidtner and dates to ca. 1700. It is in the Catholic church of St. Peter am Perlach, in Augsburg, Germany. It has been a favourite devotion of Pope Francis since he saw the image while in Germany as a student.