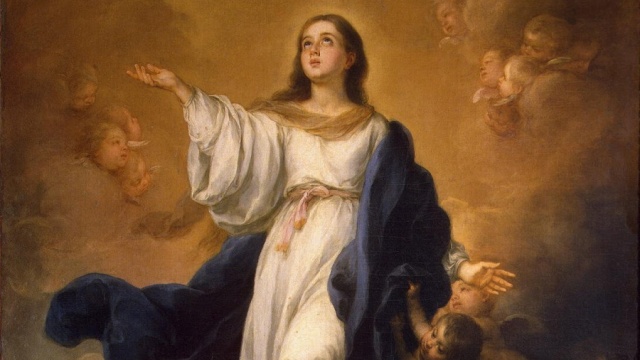 Recently while preparing a homily for the Feast of the Assumption, I was reading Munificentissimus Deus by Pope Pius XII. It’s the Apostolic Constitution that defines the Dogma of the Assumption of Mary. In the document, the Pope refers to Mary as “August Mother” (pronounced /ô'guhst/ and used as an adjective –not pronounced /aw-guhst/, like the month). He also speaks of the “august body” (of Christ) and the “august tabernacle.” It reminded me that in many places August is a month to celebrate Mary. This of course, is because of two main Marian Feasts, the Assumption on Aug 15 and the Queenship of Mary on Aug 22. But I was intrigued by the use of that word, “august.” Turns out that it means “venerable”, “respected”, “exalted” or “celebrated.” So, indeed, Mary is august! (As an aside, the month got its name because the word means venerable. The sixth month of the Roman calendar was named to honour “Augustus Caesar”, which means “venerable Caesar.”) So, all that to say that I realized that I've written a lot about Mary in the past but never really “deaconstructed.” So, while we have a few weeks left of August, let’s learn about and reflect a bit on Mary. First, Mary is present at almost every major event in the life of Jesus: his conception (Luke 1:2) his development in the womb (including the fetal development of John the Baptist in Lk 1:43), his birth (Lk 2:7), offering Him to God (Lk 2:22), his start in public ministry and the first of his miracles (Jn 2:3). She is also present at his death on Calvary (Jn 19:26) and at the birth of the Church at Pentecost (Acts 1:14). Mary is a major player in the Gospels and in the story of the early Church. But there are two key moments that I'd like to reflect upon. When the Angel Gabriel appears to Mary, he greets her with these words: "Hail Mary, full of Grace, the Lord is with thee…" (Luke 1:28) Later on - when Mary visits her cousin Elizabeth, as soon as she sees her, Elizabeth exclaims: "Blessed are you among women and blessed is the fruit of your womb." (Luke 1:42) These are the words of that prayer to Mary that Catholics like to say. All we are doing is praying with the words of Scripture (more on this later). Most of us have never really given much thought to the words of the "Hail Mary." Why would the Angel Gabriel call Mary "full of Grace"? I suppose if we spent the next couple hours, asking good questions and being honest with the answers, and we explored the theological meaning of 'Grace' (that’s a good one for deacon-structing for another day), we would discover that being “full of Grace” means not being in a state of “original sin.” This is what we refer to the Immaculate Conception. Mary was conceived without sin. That’s why Gabriel refers to her as “full of Grace.” No one else in Scripture (other than Jesus in John 1:14) is referred to as “full of Grace.” Mary was the sacred vessel which held our Lord Jesus until his birth. But, this “Immaculate Conception” is not about Mary. It’s about Jesus. The fact that Mary was “full of Grace” helps emphasize the holiness of Jesus and the fact that He is God. If Jesus, fully human and fully divine was to be full of Grace, Mary had to be full of Grace too. Another important moment in the Gospels is when Jesus was dying on the cross. Standing near the cross was Mary his Mother and the beloved disciple, whom scholars believe refers to John, the evangelist. "When Jesus saw his Mother and the disciple whom he loved standing beside her, he said to his mother, "Woman, here is your son." Then He said to the disciple, "Here is your Mother." And from that hour the disciple took her into his own home.” (Jn 19:26-27) This is why we believe that we need to take Mary “into our home” and treat her as “our mother.” All of what we believe about Mary is based on Scripture. We show devotion to and venerate Mary because we can assume that Jesus shows devotion to his own 'august' Mother. Next week, let’s look at why we pray to Mary and not just pray directly to God. - Image: The Assumption of the Virgin by Bartolomé Esteban Murillo