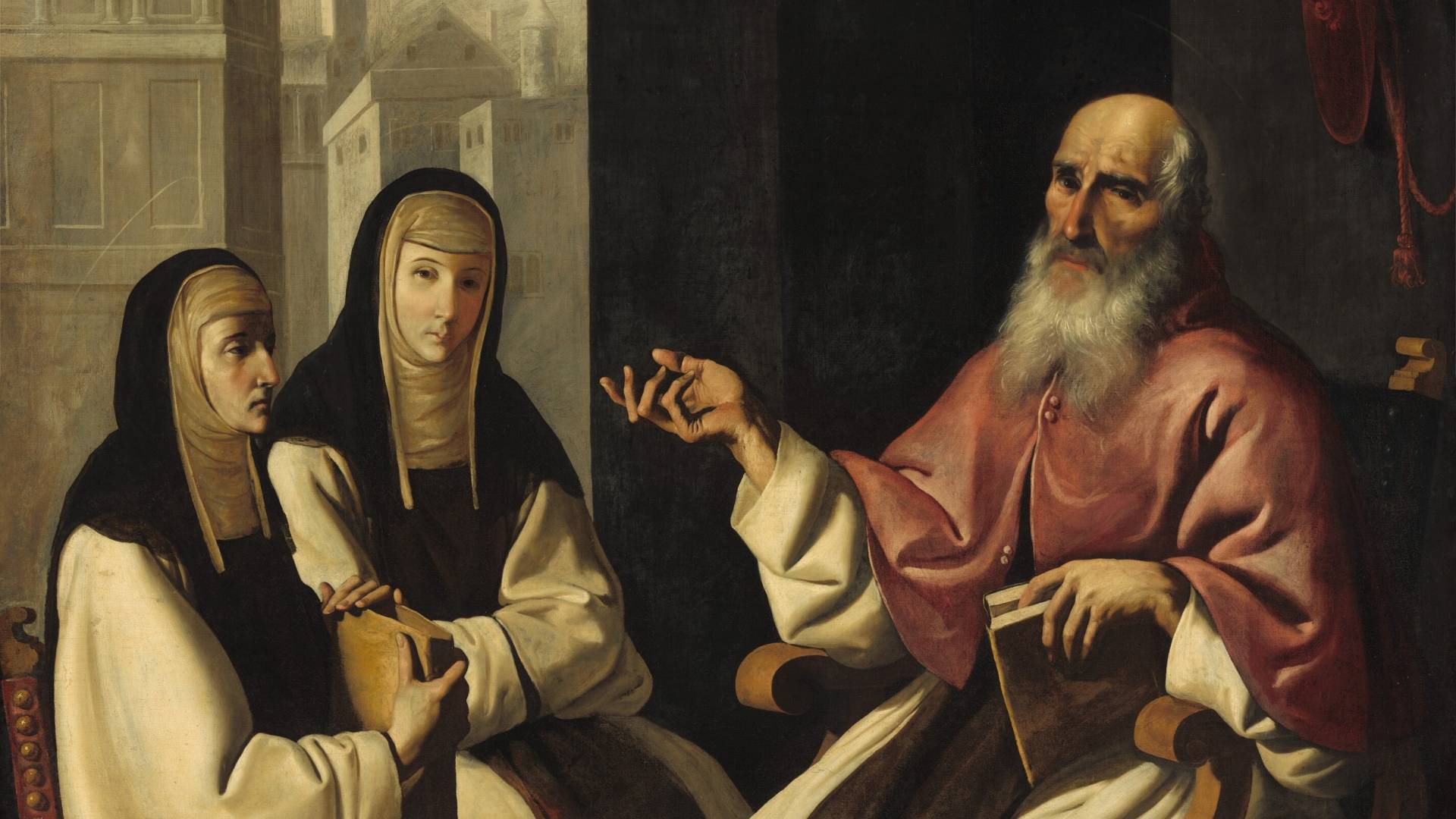 Detail of Saint Jerome with Saint Paula and Saint Eustochium by Francisco de Zurbarán (Courtesy National Gallery of Art, Washington)
We are almost done exploring the lives of some great women in the first centuries of the Church. I am calling them “Church Mothers” because, even though they may not have directly contributed to the doctrines of our Faith, they most definitely contributed to and greatly influenced the pastoral life of the Church and the practice of the Faith. In many cases, they greatly influenced those men who were defining the doctrine of the Faith. First, we learned about Thecla, Irene of Macedonia, Macrina the Elder, Macrina the Younger, Nino, and Proba. Then we learned a bit about Hermione and her sisters, the daughters of St. Philip. Two weeks ago, we learned about Eudokia, Blandina, Syncletica, Demiana, and Margaret the Virgin. Last week we learned about Marcella, Monica, Helena, Catherine of Alexandria, and Mary of Egypt. Many of these Mothers were women of nobility who lived in Rome in the 4th and 5th centuries. Because they were of nobility, not only did they greatly influence the Church, but they greatly influenced Roman culture as well. We learned about one of them, St. Marcella, last week. You'll see below how Marcella greatly influenced four other great women. This week, I’d like to focus on four women who came from two families. Melania the Elder (Antonia Melania) and her granddaughter, Melania the Younger, lived in the 4th and early 5th centuries. Melania the Elder was a Spanish noblewoman who became a Desert Mother and died in Jerusalem around AD 417. She was well-known to many of her contemporaries, including St. Jerome, St. Augustine, and St. Paulinus of Nola, to whom she was related – all of whom refer to both women in their writings. Melania moved to Rome after her marriage, and following the death of her husband and two of her children, she left her other son, Valerius, in the care of relatives and moved to Alexandria to live with ascetic monks whom she supported financially. During a trip to Rome to visit her son, by now a wealthy Roman senator, she met her granddaughter Melania, who had been born in 383. By this time, Melania the Younger had lost two young children and had secured the consent of her husband, Pinianus, to live a celibate life, no doubt influenced by St. Marcella. When her father died, Melania and Pinianus moved out of the city and gave most of their possessions and riches away to charity and dedicated themselves to supporting the poor, the sick, and pilgrims going to and returning from the Holy Land. Tradition says that during this time, she also had a hand in freeing some 8000 slaves. It is not clear whether Melania the Elder remained living with her granddaughter or whether she returned to Alexandria. But when the Visigoths invaded Rome in 410, Melania the Elder was in Rome. Both women left the city together with Pinianus and Albina (Melania the Younger's mother) and went to Tagaste in North Africa, where they became close with St. Augustine. While in North Africa, Melania the Younger founded a convent and a monastery and became a generous supporter of several churches and monasteries. She then became superior of the convent, while her husband, Pinianus, became the head of the monastery. In 417, they all moved once again, this time to Jerusalem, where they became close with St. Jerome. There is a dispute as to which of the two Melanias built a convent in Jerusalem and a monastery on the Mount of Olives. What’s clear is that Melania the Younger continued to maintain these after her grandmother’s death. After Pinianus’ death, Melania built yet another monastery and a church. Melania the Elder considered, as did Origen, the ascetic life necessary for salvation and was a spiritual mentor to the Desert Father Evagrius of Pontus, whom she persuaded to move to Egypt to become an ascetic. Melania the Younger died in AD 439. She is revered as the founder of many monastic communities for both men and women and as a spiritual mother to her successors.  No doubt influenced greatly by her grandmother, she was an ardent apostle and promoter of monasticism and virginity as they were practised in the first centuries of the Church. In the late 19th century, an Italian cardinal, Mariano Rampolla, discovered her story in El Escorial, Spain, and published it in 1905 as the Life of St. Melania the Younger, leading to a cult following. In the biography, Cardinal Rampolla says,

We may say without fear of error, that Melania, her whole life long, shows herself deeply penetrated with the spirit of retirement, of prayer, of poverty, of humility, of mortification; she was filled with an ardent love of virginal chastity, and felt within her soul an urgent need to infuse her spirit into other souls, so as to rescue them from the all-pervading corruption of that age. Hence it was that she became the foundress of monasteries and the wise instructress of virgins.

Paula of Rome lived from AD 327 to 404 and was a member of a senatorial family of great status. St. Jerome, who became very close to Paula once she moved to Bethlehem, wrote her story. At age 16 she was married to Toxotius, a nobleman, with whom she had five children. After 15 years of marriage, Toxotius died leaving her widowed. At this point, Paula, through the influence of St. Marcella and her group, became more and more interested in religion and became a member of Marcella’s semi-monastic group of women. During a trip to Rome in 382, St. Jerome met with and taught these women. A few years later, Paula went with St. Jerome on a pilgrimage to the Holy Land with a large group of men and women, including her unmarried daughter Eustochium. Eustochium was born around AD 368 and was already living an austere life with her mother before her father died. When she was 16, she made a vow of perpetual virginity. It was with great joy that she travelled with her mother and Jerome to the Holy Land. After this pilgrimage, they decided to return to Palestine and settle there permanently. Together with Jerome, Paula and her daughter founded two double monasteries in Bethlehem; Paula and Eustochium lived with the nuns, and Jerome lived with the monks. They also ran a hostel for pilgrims right next to the Church of the Nativity in order to fund their monasteries. While Jerome was translating the Scriptures into Latin, Paula worked as his secretary, as she was well-versed in Hebrew. In fact, legend says that it was Paula who convinced Jerome to undertake this work. Eustochium spoke Latin and Greek and knew enough Hebrew to read the Scriptures. It is said that Jerome dedicated his commentaries on Isaiah and Ezekiel to her. Together, the two women copied the translated work and promoted its circulation. At the time many people commented on how difficult St. Jerome was and how stingy he was with praise. Apparently not toward his friend Paula. He wrote: “If each of my limbs were to be gifted with a human voice, I could still do no justice to the virtues of the holy and venerable Paula.” And in a letter to Eustochium titled “De custodia virginitatis”, he notes Paula’s dedication to the ascetic life, describing her strict fasts and abstinence. He also describes her passionate study of Scripture. It is also clear from Jerome’s letter that Paula was revered by Christians in the region and recognized as an example of the ascetic lifestyle. When she died in 404, a large Palestinian crowd came to pay their respects. After Paula's death, Eustochium assumed the leadership of the convents. By this time, most of their wealth had been depleted as a result of Paula’s generous charity and the burden of running the monasteries. In 417, the monasteries were attacked by a mob, and one of them burned to the ground. Eustochium died shortly after, at around 50 years of age. The influence of this family did not end with Eustochium’s death. Her brother was the father of Paula the Younger (and also of St. Eustochius of Tours), who joined Eustochium in the Holy Land when Paula died and took over the direction of the monasteries when Eustochium died. It is said that when St. Jerome died in 420, it was Paula the Younger who closed his eyes. The names of these three women can be found throughout the letters of St. Jerome, and some would argue that the work of Jerome, a great Doctor of the Church, was greatly influenced by them and perhaps would not have happened had it not been for them. Come back next week as we conclude this celebration of our Church Mothers with the tale of an amazing woman who made an incredible journey and left her journal for all of us to read.