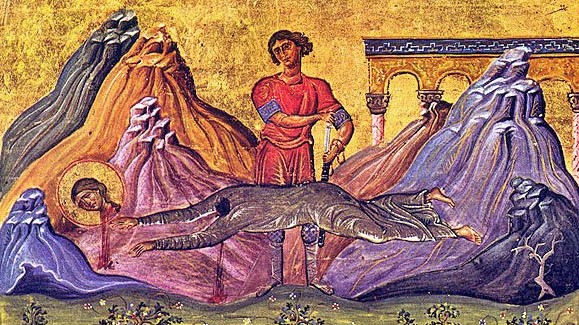 Beheading of St. Hermione, from the Menologion of Basil II, a manuscript currently in the Vatican Library. (Source: Pemptousia blog)
The daughters of Philip Last week, after looking at the men the Church calls “Church Fathers”, we started looking at what I am calling “Church Mothers”. They may not have been prolific writers, and perhaps the Church was not as good at keeping records about their stories, but we know they existed. There were many women who were important and influential in the early Church. We know of some who are mentioned in the Book of Acts. There were also others who learned the Faith directly from the Apostles. Last week, we learned about Thecla, Irene of Macedonia, Macrina the Elder, Macrina the Younger, Nino, and Proba. In doing this research I keep coming across references to the four daughters of Philip the Deacon or Evangelist. In the book of Acts we read that Paul and his companions stopped in Caesarea on their return to Jerusalem “and stayed at the house of Philip the evangelist, one of the Seven. He had four unmarried daughters who prophesied” (Acts 21:8-9). Since I first learned that these four women existed, I was very intrigued, particularly by the fact that they “prophesied”. Acts 21 continues to say that while Paul was still in Caesarea, a prophet named Agabus came from Judea, and it describes how and what he prophesied: The Holy Spirit said that Paul would be handed over to the Gentiles (Acts 21:10-11). We can only presume that Philip’s daughters also prophesied like Agabus. If we look outside Scripture, there is some confusion as to whether these four where the daughters of Philip the Apostle or Philip the Deacon. There are references to them in the writings of Eusebius and Papias. Papias was the Bishop of Hierapolis, where Philip and his daughters lived in later years, and so he likely knew them. Eusebius, who was Bishop of Caesarea around AD 314, writes in his Ecclesiastical History that the daughters of Philip were renowned for their prophetic gifts and “occupied the first place among the successors of the apostles”. Eusebius goes on to say that these “built up the foundations of the churches which had been laid by the apostles” and that they preached the word. They prophesied You may remember when reading about Tertullian in Deacon-structing Latin Fathers that the main reason why he is not considered a saint is because he was a proponent of Montanism, a heresy which is also called the “New Prophecy”. It was a movement of new prophets, led by Montanus. They would have visions and prophesy under the influence of the Spirit. Along with Montanus, two other leaders of this movement were women, Priscilla and Maximilla. At its beginning, the Church would have acknowledged the charismatic gift of some of these prophets. Ultimately, by the late 2nd century, Montanism was declared a heresy, likely because some of these “revelations” were considered to be additions to the teachings of Christ and the Apostles. Others conclude that the problem with Montanism was not one of doctrine but one of practice. Eusebius writes that the early Montanists claimed they received their prophetic gifts from prophets like Agabus and the daughters of Philip. I would say that is it likely that Philip and his daughters were among these original new prophets before the movement became heretical. Eusebius quotes Polycrates in referring to the daughters of Philip as “great lights” and, quotes Papias, saying that people travelled great distances just to see and hear them. It’s very curious that their names are never mentioned. There are multiple sources that list their names as Irais, Chariline, Mariamne, and Eutychiane. The Greek calendar which lists martyrs and saints says that two of them were Eukhidia and Hermione. Of these, the one who most certainly was a daughter of Philip was Hermione. St. Hermione is venerated in the Eastern Church and was a physician who ran a medical clinic in Ephesus. There are multiple legends about her torture and miraculous liberations from death. She was finally beheaded under the Emperor Hadrian and is said to be buried in Ephesus. Her feast day is September 4th. You may want to read other versions of her story. The Saints, Feasts, Family blog shares one St. Hermione's story. The Pemptousia website shares a completely different one. As for the other sisters, there is no consistent source that describes their names with authority. It’s possible that Eutychis and Eukhidia are the same person. Tradition says that Eukhidia went to Ephesus to join her sister Hermione, but we don’t know what happened to her. Chariline/Mariamne may have been Philip’s sister or daughter. We know a little bit about the two sisters who remained with Philip in Hierapolis, thanks to Papias. Eusebius relates that Papias, “their contemporary, says that he heard a wonderful tale form the daughters of Philip. For he relates that in his time one rose from the dead.” We don’t know any more details. Eusebius goes on to quote Polycrates, who also was a Bishop of Ephesus, in writing that “Philip […] died in Hierapolis, and so did two of his daughters, who had grown old in virginity. And another of his daughters after having passed her life under the influence of the Holy Spirit, was buried in Ephesus.” It is a little sad that their stories (and their names) are not preserved. It is clear to me that they were great women in the early Church. I also wanted to share with you about a few 2nd and 3rd century holy women today: Eudokia, St. Blandina, Syncletica of Alexandria, Demiana, and Margaret the Virgin. How about you come back next week and we’ll look at them then?