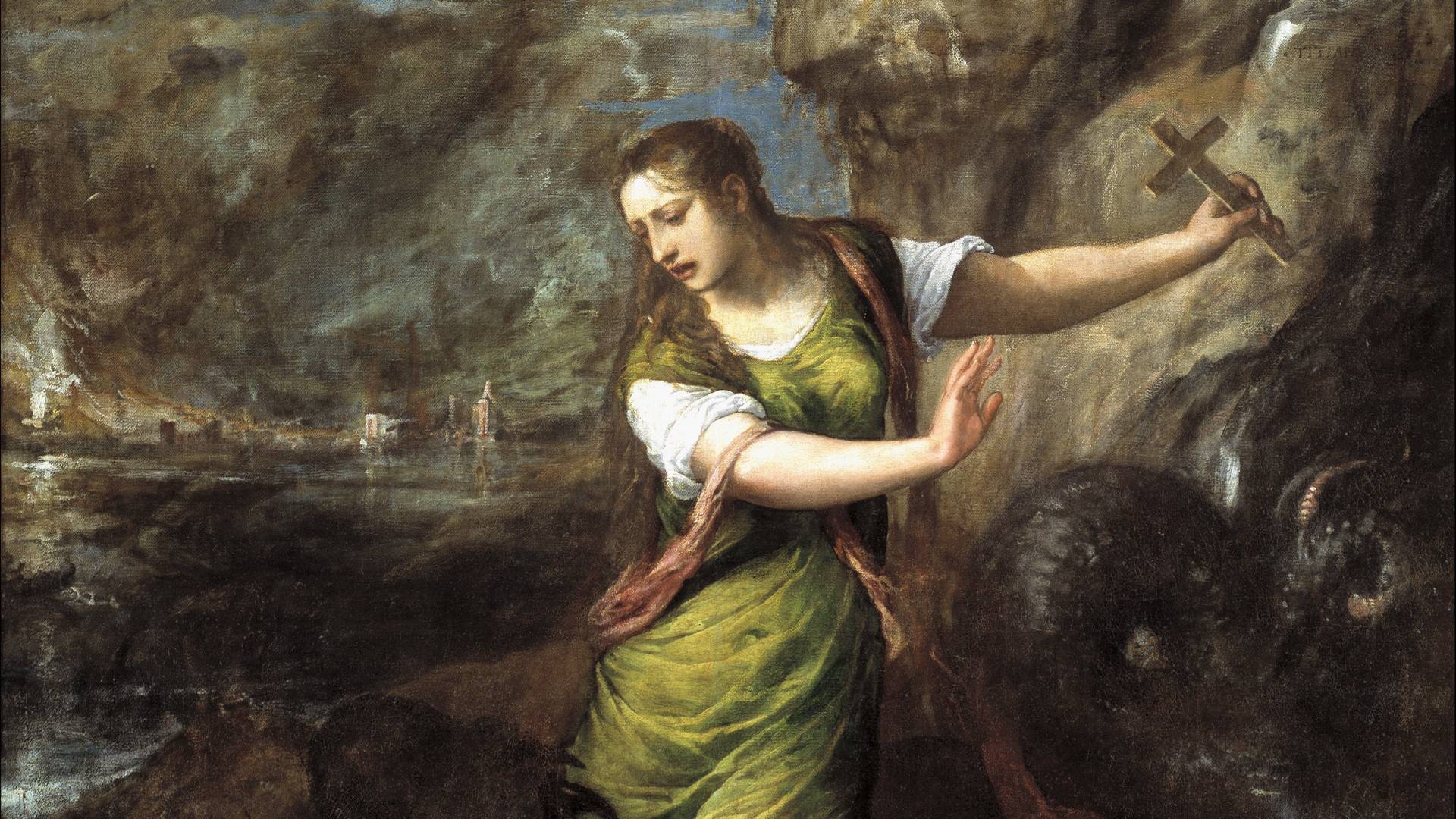 Detail of St. Margaret and the Dragon by Titian (Source: Wikimedia Commons)
Last week, we learned about St. Hermione the Physician and her sisters, traditionally believed to have been the four daughters of St. Philip the Evangelist, one of the first seven deacons, mentioned in the book of Acts. Two weeks ago, we learned about a few other women who were deeply influential in the early Church. I’m sure you had not heard of them before: Thecla, Irene of Macedonia, Macrina the Elder, Macrina the Younger, Nino, and Proba. Today, let’s look at a few others from the 2nd and 3rd centuries. St. Eudokia is also known as Eudocia, or Eudokia of Heliopolis. Tradition holds that Eudokia was a Samaritan woman who lived in the late 1st and early 2nd century. She led a questionable life, acquiring wealth from having wealthy lovers. One night she heard the monk Germanus preaching in the house next door to hers. Eudokia’s heart was moved, and the next day she found Germanus to ask if someone like her could also be saved. Germanus recommended a week of seclusion, fasting, and prayer, after which Eudokia gave up all her wealth and her previous life and was baptized. She entered the monastery at Heliopolis (in present-day Egypt) where she received many special gifts from God. When she became abbess of the monastery, one of her former lovers came to see her again. Eudokia rebuked him, and he was struck dead. Immediately Eudokia prayed for him, and her former lover came back to life and in turn was converted and baptized. There are also stories of other people being brought back to life. After some 50 years of ascetic living at the monastery, Eudokia was executed by the governor Vicentius on March 1, 107. St. Blandina died as a martyr in AD 177, in Lyon, when she was probably not quite 20 years old. Blandina was a slave who, along with her mistress, was rounded up during a violent persecution. St. Irenaeus was a priest in Lyon at the time. According to Eusebius’ Ecclesiastical History, Blandina endured torment for a whole day until her executioners “were wearied and tired, confessing that they had been baffled, for they had no other torture they could apply to her.” The tortures were relentless, and many apostatized, while others died in prison. Those who didn’t continued to endure torture. Blandina was tied to a stake, like one crucified, and left as food for the wild beasts that were let loose on her. Still she continued to inspire the other martyrs. When none of the beasts attacked her, she was sent back to prison. On the last day of the gladiatorial shows, Blandina was once again brought back to the amphitheatre, where she was exposed to every torture possible, all during which she continued to exhort her companions “not as one thrown to the wild beasts, but as one invited to a marriage supper”. Finally, she was sacrificed, with, according to Eusebius, “the heathens themselves acknowledging that never among them did woman endure so many and such fearful tortures.” While she is not remembered for her writings or sage advice, she is nonetheless remembered for her witness – no doubt an inspiration for many to continue steadfast in their Faith. Her feast day is June 2. The Eastern Tradition that brought us most of our Desert Fathers, also has a tradition of Desert Mothers or Ammas, who also lived as hermits in the deserts of Egypt. Most of their stories are documented in a work titled the Lausiac History, written by Palladius, a student of St. John Chrysosthom. Among them are Theodora of Alexandria, Sarah of the Desert, and Olympias the Younger. They all lived in 4th and 5th centuries. The best known Amma is Syncletica of Alexandria, who lived in the late 3rd and early 4th century. Having distributed her parents' riches to the poor after they died, Syncletica is said to have moved to the desert with her younger sister, who was blind, where they lived in a crypt among the tombs outside of Alexandria for the rest of their lives. Very soon, news of her spread, and many young women came to learn from her and live the ascetic life with her. After a long illness, she gave final instructions to her sisters and died at age 80, around the year 350. Her sayings are preserved along with the sayings of the Desert Fathers. One of them is:

"There are many who live in the mountains and behave as if they were in the town; they are wasting their time. It is possible to be a solitary in one's mind while living in a crowd; and it is possible for those who are solitaries to live in the crowd of their own thoughts."

She is venerated on January 5th. St. Demiana lived in northern Egypt in the late 3rd century. Her mother died when she was quite young, and she was brought up by her father, who was a Christian. At the age of 15, she requested him to build her a house where she could live a life of celibacy, in isolation, and devote herself to Christ as his bride. Her father built her a palace in the outskirts of the city where she lived with 40 friends, who also embraced the monastic life. During the Diocletian persecution, Demiana’s father was persuaded to renounce his Christian Faith. When Demiana heard the news, she left her convent to go see him. She convinced him to return to the Faith. When Diocletian found out, he had Demiana’s father beheaded. He then turned his attention towards Demiana and her 40 virgin companions. Demiana was tortured over a period of three years, but each time she persevered and survived. Thus, it was ordered that she, along with her 40 friends, be beheaded. Tradition holds that when St. Helena travelled to the Holy Land, she visited the tomb of St. Demiana and the 40 Virgins and had a church built over it. Nearby, the original site of St. Demiana’s monastery has also been restored and is the location of a Coptic Orthodox Monastery for a congregation of sisters who dedicate their lives to Christ, inspired by the life of the one who is considered to be the founder of monasticism or Coptic Orthodox nuns. St. Demiana and the 40 Virgins are commemorated in the Coptic Orthodox Church on January 21. Margaret of Antioch is also known as Margaret the Virgin or St. Marina the Great Martyr. She lived in the 3rd century in Antioch and was martyred at age 15. According to the Golden Legend, Margaret’s mother died in childbirth and she was brought up by her nurse, who was a Christian. When Margaret herself embraced Christianity, her father disowned her, and she was adopted by her nurse. In a story that is very common with early Church women martyrs, Margaret, who was very beautiful, was proposed marriage by a Roman governor, who demanded she renounce her Faith. Margaret refused and was tortured. Many miracles reportedly occurred during these tortures. Legend says that they tried to execute her by drowning and by burning, but each time she was miraculously saved, which led to the conversion of thousands. In the end she was beheaded. Along with St. Barbara and St. Catherine of Alexandria, she is one of the three original women martyrs who became known as the Fourteen Holy Helpers for their powerful help to those who ask for their intercession. St. Margaret of Antioch is the patron of safe childbirth, and her feast day is July 20. I must say that learning about these women has inspired me to learn more about saints in general, but especially those who lived in the first centuries of the Church. If you dig deep enough, you’d be amazed and inspired by what you will find. Come back next week, and let’s look at some more influential women in the early Church who lived in the 4th century, including St. Helena and St. Monica.