The content of Caravaggio's art was often explicitly Catholic, but what about his beliefs, or his lifestyle? The controversial artist was recently featured in a rare exhibition in Canada, so S+L's Jenna Murphy took a trip to Ottawa to see his works in person. Jenna reveals what she learned in a recent episode of Catholic Focus. If you missed it when it originally aired in September, the program is streaming above. Republished below the jump is Jenna's reflection on the controversial artist. From Darkness to Light: The life and work of Caravaggio He took the art scene by storm and it’s never quite been the same since. Michaelangelo Merisi da Caravaggio's art, like his character, resists comparison. Last month, I had the opportunity to witness twelve pieces Caravaggio left behind. From June 17th to September 11th, the National Gallery of Canada in Ottawa is hosting 58 works by more than 30 artists. Twelve of said pieces are Caravaggio’s original works. The exhibit was five years in the making as it marks the first time any of Caravaggio’s works have been on Canadian soil. 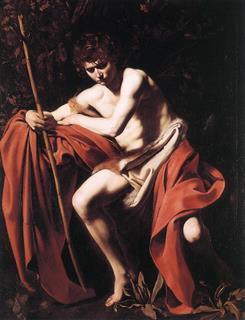 When he started painting, no one else was using light and dark in such forceful juxtaposition (he began with black canvas and worked his way to the peaks of light), nor were other painters of the day using live models (without regard of their questionable moral bearings) nor were others painting the everyday (and somewhat objectionable) scenes that would meet the common 17th century street-wanderer. What is perhaps the most remarkable about Caravaggio is the seeming schizophrenia in the life and work of the renowned artist. Many, upon contemplating his paintings would probably come away convinced of Caravaggio’s saintly disposition or of his profound devotion to the mysteries of the Christian faith. Then they’d learn about his life. Then disbelief would set in along with the overwhelming inclination to make excuses for this brilliant yet, apparently troubled man.

Caravaggio’s family hails from the small town of Caravaggio (in Lombardy, Italy) though Caravaggio himself was born in Milan. His career began at 13 when he was accepted as an apprentice for Simone Peterzano (a Milanese painter). There, Caravaggio learned about materials and techniques, studied art and performed menial tasks in the workshop. Then, like all other fledgling young artists of his day, Caravaggio hit the road for Rome. Here, it was an unspoken rule that artists must converge to make a life for themselves. After all, if they were to sustain themselves on the world of art alone, then there was nothing like Church commissions to keep food on the table! After a few tough years, Caravaggio was noticed by Cardinal Del Monte. The Cardinal was taken with the young artist’s unique techniques. So much so, that the Cardinal had Caravaggio move into his palace and he began to actively promote the young artist’s works. This marked Caravaggio’s entrance into high society. Scandal 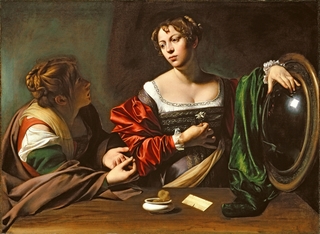 It seemed there was no end to the artist’s creative genius. Caravaggio, much to his patron’s delight, would pump out one masterpiece after another. It seemed the more out of control his personal life became (cheating, brawling and murder were standard fare), the more his art would become more refined, more potent. For some, though, his art was too real. Bare shoulders, plunging necklines, severed heads; this raw humanity didn’t always fly in 17th century Rome. As a result, many of his pieces were rejected as altar pieces and as church hangings. One such piece, the Madonna of Loretto (now hanging in a church in Rome) was widely criticized upon its unveiling. The people of the day were shocked to behold the Mother of God leaning nonchalantly against a wall in her bare feet while holding baby Jesus in her arms. Inherently Catholic It is ironic that the very art that today we consider “classical” and “iconic” to our faith was considered questionable and perhaps void of modesty and virtue. Yet, the fact remains that no individual artist has made such a lasting impression on the world of modern art. Truly, many have called Caravaggio the “first modern artist”. It is no surprise, then, that his style has sparked both widespread admiration and imitation throughout the centuries. Before John Paul II refined the beautiful theology of the body, Caravaggio's paintings suggested a reverence for the inherent beauty of human form. Troubled though he may have been, his art speaks eloquently of the dignity of the mundane. Though the original medium may be weathered and cracked, the message of beauty still echoes down the centuries. And this same beauty still fuels, escapes and reduces artists to relentless seekers as surely and as forcefully as it did in Caravaggio's life. - Photos courtesy of the National Gallery of Canada