A Songstress for the Soul: Part II

Tonight’s edition of Perspectives features an interview segment with Sparrow Records' newest gem, Audrey Assad.
A recent convert to Catholicism and a New York City suburb native, Audrey told us about her vision for Catholic music and about how we should not be afraid to set the bar high. As mentioned in a previous post, her newest album, The House You’re Building, is proof of her strong convictions. 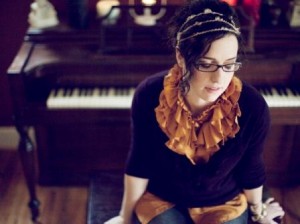 The album has been eagerly received by Catholic and non-Catholic fans alike (the album’s first single received one of iTunes strongest debuts on the Christian/Gospel Singles chart) and having toured already with the likes of Matt Maher and Chris Tomlin, it appears that Audrey will be sticking around for a while. “A lot of new artists come and go in this business,” says Charlie Lowell of Jars of Clay, “Audrey Assad will not be one of those- she’s a refreshing artist- a voice comforting and challenging together. Her melodic sensibilities are infectious and she communicates God’s caring and creative hear in a way that cuts through the day-to-day mess of life. It will be a privilege to share the stage with Audrey, and to watch her grow as an artist over the years.” Last week, I had the opportunity to speak with Audrey about her art as vocation, about her convictions on the nature of “Catholic” music and about her dreams for the future. Below is a complete transcript of our discussion.