Yesterday I was given the opportunity to attend a media screening of the Andrew Rossi documentary, Page One: A Year Inside the New York Times. 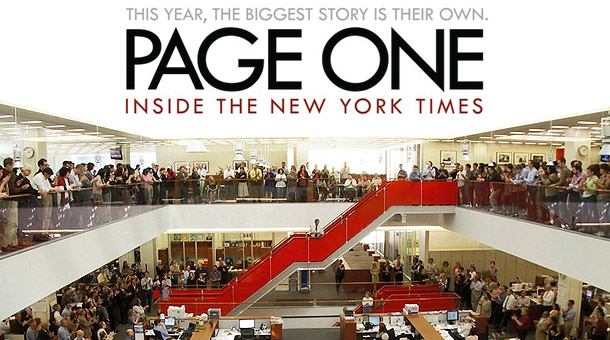 We often receive passes to screenings for films, and usually only a small percentage share a common interest or “Catholic” angle to reflect on. Page One, though having no Catholic angle, told a fascinating story of something very close to our heart at Salt + Light … media. In the documentary Rossi follows various editors and journalists at the New York Times for a year. The viewer is shown a rare, and intriguing glimpse of how even a giant of print media is being affected by the changing media landscape. In a time when demand for the print newspaper is diminishing, being replaced by free online content, the New York Times has had to evolve and shift its way of delivering the news to stay relevant after 150 years of doing it the same way. At Salt + Light, we’ve only been around for eight years but so much has changed for us as well. When we first began – we were a tv network. We were Salt + Light Television and if your cable company didn’t carry us, well, hopefully they would soon. Our first documentary, Love is a Choice was sold mostly on VHS, though we did have some requests for DVD. Love is a Choice was not shot in HD, the trailer was not uploaded to YouTube, and our followers didn’t learn about it through our blog or on twitter. Eight years later we continue to try and break the stereotype that we are just Salt + Light Television. We are Salt and Light Catholic Media Foundation. We use every form of media available to us to spread the Light of Christ and the Flavour of the gospel. Salt + Light does have a national television network, but now if your carrier doesn’t carry it, or if you live outside of Canada you can stream our entire broadcast LIVE online. If the LIVE schedule doesn’t work for you, watch the program at your convenience on-demand. If you’re on the train or sitting in a coffee-shop, you can read our blog or watch a reflection or program from your mobile. You can listen to our radio program on the Catholic Channel, or download the podcast from our radio page. One of my colleagues prefers to listen while ironing, but whatever works for you! Salt + Light magazine is delivered to homes and parishes across the country, and also available in a digital edition. If you’re reading this, you’re likely no stranger to the numerous articles and reflections posted on our blog. Have you connected with us on facebook or twitter yet? – Another form of media we use to connect people with their faith and each other. I leave you with our latest "Media Ministry" video. It’s only 3 minutes and showcases the work and mission of Salt and Light. Now it’s your turn to use this media available to you … Share this video on Facebook and Twitter, email it to friends and family who have yet to discover Salt + Light, or post it on your blog. Help spread His Light far and wide. Enjoy!