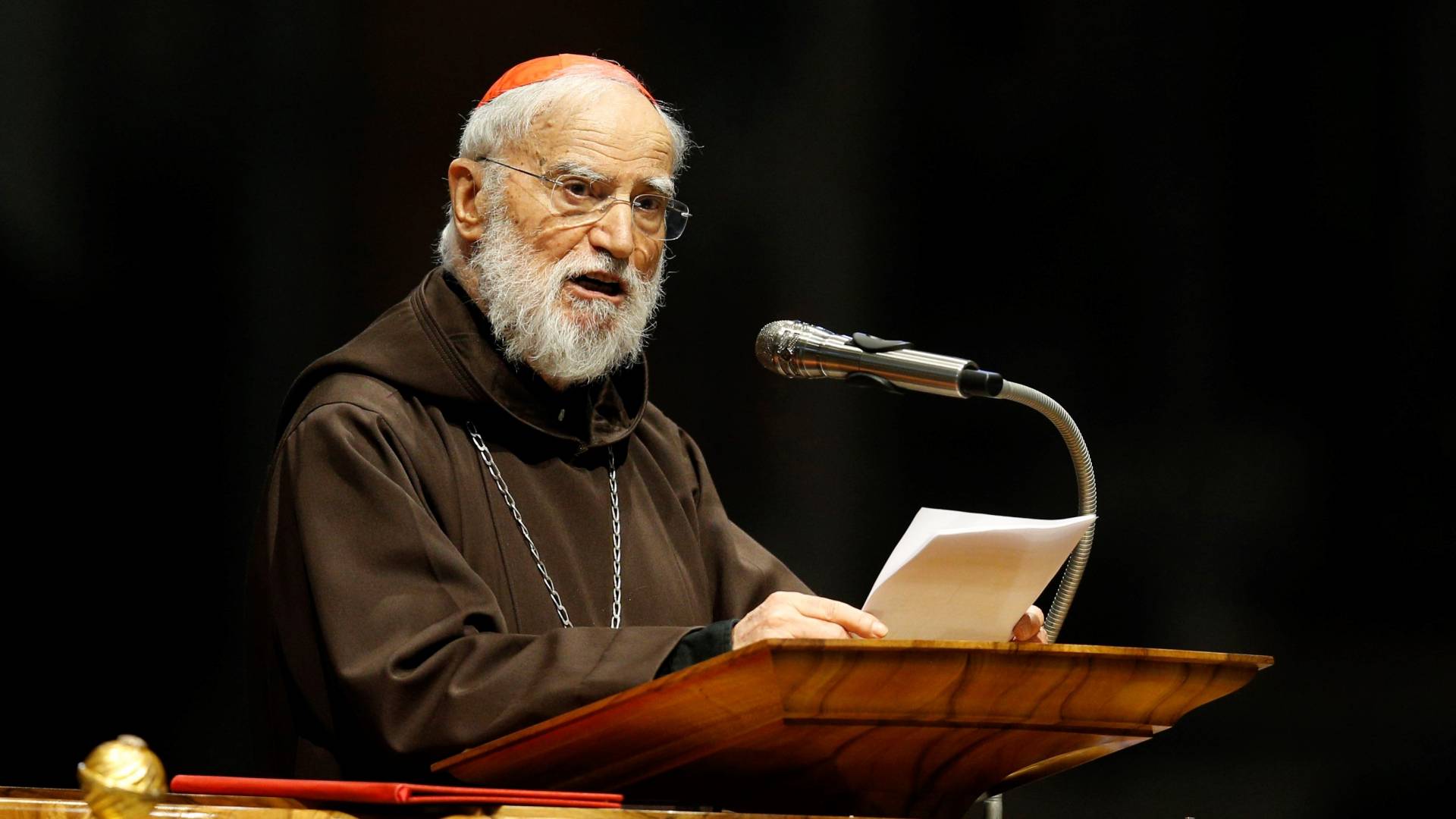 Cardinal Raniero Cantalamessa, preacher of the papal household, delivers the homily during the Good Friday Liturgy of the Lord's Passion in St. Peter's Basilica at the Vatican April 15, 2022. (CNS photo/Paul Haring)

On April 15, 2022, Good Friday, Pope Francis presided over the celebration of the Passion of the Lord in St. Peter's Basilica. According to custom, Cardinal Raniero Cantalamessa, Preacher to the Papal Household, delivered the homily. Read the full text of his homily below. Join Pope Francis in celebrating Easter in the Vatican. Check out our broadcast schedule for more details!

PILATE SAID TO HIM, “WHAT IS TRUTH?”

In his account of the Passion, the Evangelist John gives particular importance to the dialogue of Jesus with Pilate, and it is on this that we want to reflect for a few moments before proceeding further with our liturgy. It all begins with Pilate's question: "Are you the king of the Jews?" (Jn 18:33) Jesus wants to make Pilate understand that the question is far more serious than he thinks, and that it has meaning only if he does not simply repeat an accusation from others. Therefore, he asks in turn: "Do you say this on your own, or have others told you about me?". He tries to lead Pilate to a higher plane. He speaks to him of his kingdom, a kingdom that "is not of this world". Pilate understands only one thing: that it is not a question of a political kingdom. If the accused wants to talk about religion, he doesn't want to get into these kinds of problems. He therefore asks with a touch of irony: "Then you are a King?" Jesus replied: “You say that I am a king" (Jn 18:37). By claiming to be king, Jesus exposes himself to the danger of death; but instead of clearing himself by denying it, he strongly affirms it. He reveals his superior origins to him: "I came into the world..." He says, therefore, mysteriously, that he existed before his earthly life, he comes from another world. He came to earth to be a witness to the truth. Jesus treats Pilate as a soul who needs light and truth, and not as a judge. He is interested in the destiny of the man Pilate more than in his own destiny. With his appeal to receive the truth, he wants to prompt him to come to his senses, to look at things with different eyes, to place himself above the momentary dispute with the Jews. The Roman Procurator understands Jesus' invitation to him, but he is skeptical and indifferent about this kind of higher speculation. The mystery he glimpses in Jesus' words frightens him and he prefers to end the conversation. Muttering to himself "What is truth?", he leaves the Praetorium. 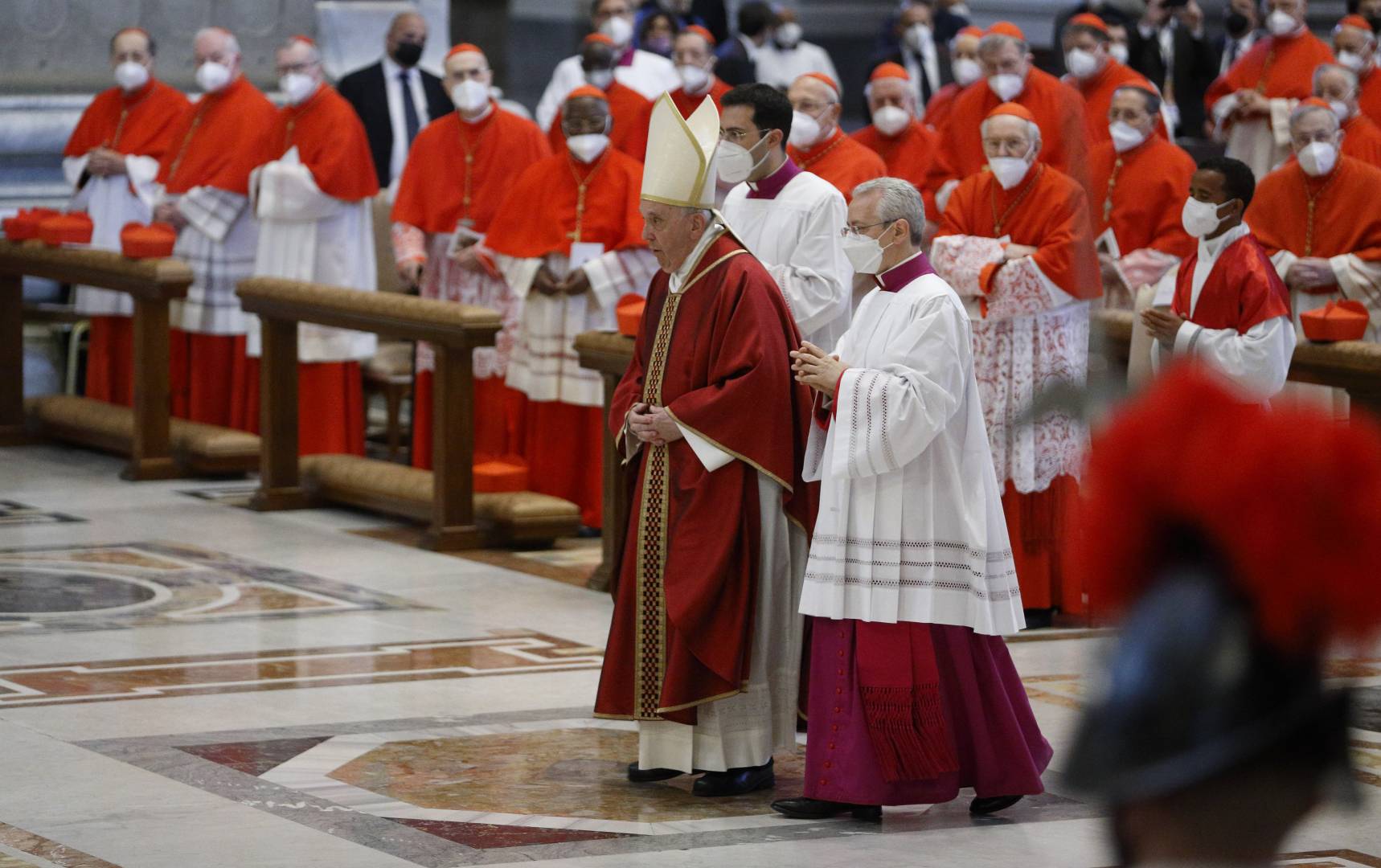 Pope Francis presides over the Good Friday Liturgy of the Lord's Passion in St. Peter's Basilica at the Vatican April 15, 2022. (CNS photo/Paul Haring)
*          *          *
What a relevant page from the gospel for today! Even today, as in the past, man asks himself: "What is truth?". But, as Pilate did, he casually turns his back on the one who said, "I came into the world to bear witness to the truth". "I am the Truth!" (Jn 14: 6). Through the Internet I have followed countless debates on religion and science and on faith and atheism. One thing struck me: hours and hours of dialogue, without ever mentioning the name of Jesus. And if the believing party sometimes dared to mention his name and his resurrection from the dead, they immediately tried to close the discussion as an irrelevant digression. Everything happens "etsi Christus non daretur": as if in the world there had never been a man called Jesus Christ. What is the result? The word "God" becomes an empty vessel for everyone to fill at will. But it is precisely for this reason that God took care to give content to his name. "The Word became flesh". Truth became flesh! Hence the staunch effort to leave Jesus out of the discourse on God; he removes from human pride any pretext for deciding himself what God should be like! “Oh sure: Jesus of Nazareth!”, some may say. "But if people even doubt that he ever existed!" A well-known English writer of the last century – known to the general public for being the author of the series of novels that later became films "The Lord of the Rings", J.R.R. Tolkien – in a letter, gave this answer to his son who mentioned the same objection to him:

It takes a fantastic will to unbelief to suppose that Jesus never really ‘happened’, and more to suppose that he did not say the things recorded all of him – so incapable of being ‘invented’ by anyone in the world at that time: such as ‘before Abraham came to be I am’ (Jn 8:58). ‘He that hath seen me hath seen the Father’ (Jn 14:9)1.

The only alternative to the truth of Christ, adds the writer, is that “he is a fraud” and the Gospels “garbled accounts of a demented megalomaniac”. Could such a case, however, withstand twenty centuries of relentless historical and philosophical criticism and produce the fruits it has produced? 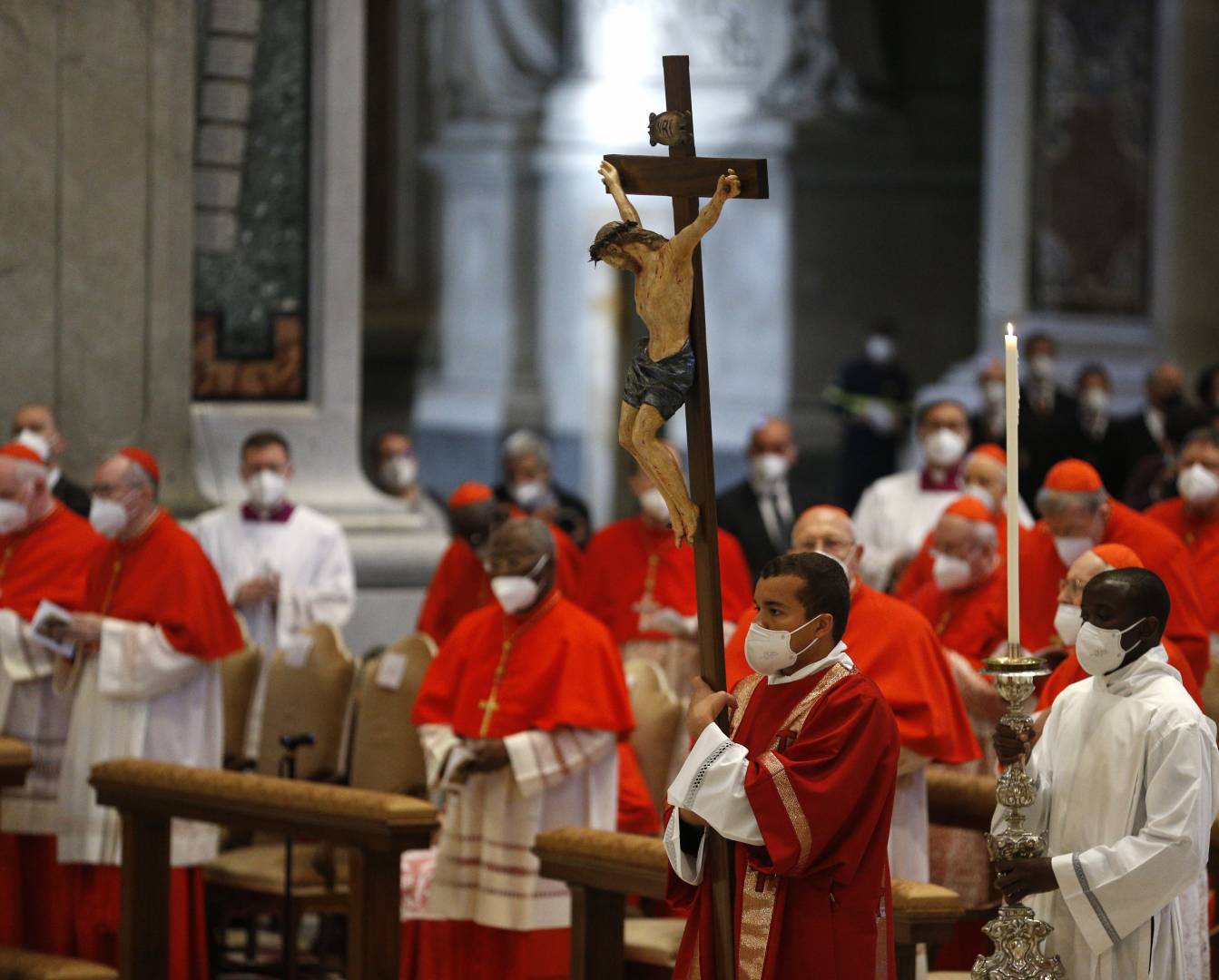 A man carries a crucifix during the Good Friday Liturgy of the Lord's Passion in St. Peter's Basilica at the Vatican April 15, 2022. (CNS photo/Paul Haring)
Today, we go beyond Pilate's skepticism. There are those who think that one should not even ask the question "What is truth?", because the truth simply does not exist! “Everything is relative, nothing is certain! Thinking otherwise is intolerable presumption!" There is no longer any place for "the great narratives about the world and reality", including those about God and Christ. Dear brother and sister atheists, agnostics or those still searching for truth (if there are any listening): the words I am about to address to you are not those of a poor preacher like me; they are from one of your own, one that many of you admire, of whom much is written and of whom, perhaps, many also consider themselves, in some way, disciples and followers: Søren Kierkegaard, the founder of existential philosophy!

So much is said – he writes – about human suffering and poverty…So much is said about wasted lives. But only that man’s life is wasted who… has never realized, because he has never, in the deepest sense, intuited that there is a God, and that he, he himself, his own self, stands in this God’s presence.2

Some say: there is too much injustice, too much suffering in the world to believe in God! It's true, but let's think for a moment how much more absurd and hopeless the evil that surrounds us becomes without faith in a final triumph of truth and good. The Resurrection of Jesus from the dead, which we will celebrate the day after tomorrow, is the promise and the sure guarantee that this is what will happen because it has already begun with him. If I had the courage of St. Paul, at this point I too would have to shout: "We implore you on behalf of Christ, be reconciled to God.” (2 Cor 5:20). Do not "waste" your life! Do not leave this world as Pilate left the Praetorium, with the unanswered question: "What is truth?" It is too important: It is a question of knowing whether we live for something, or in vain! 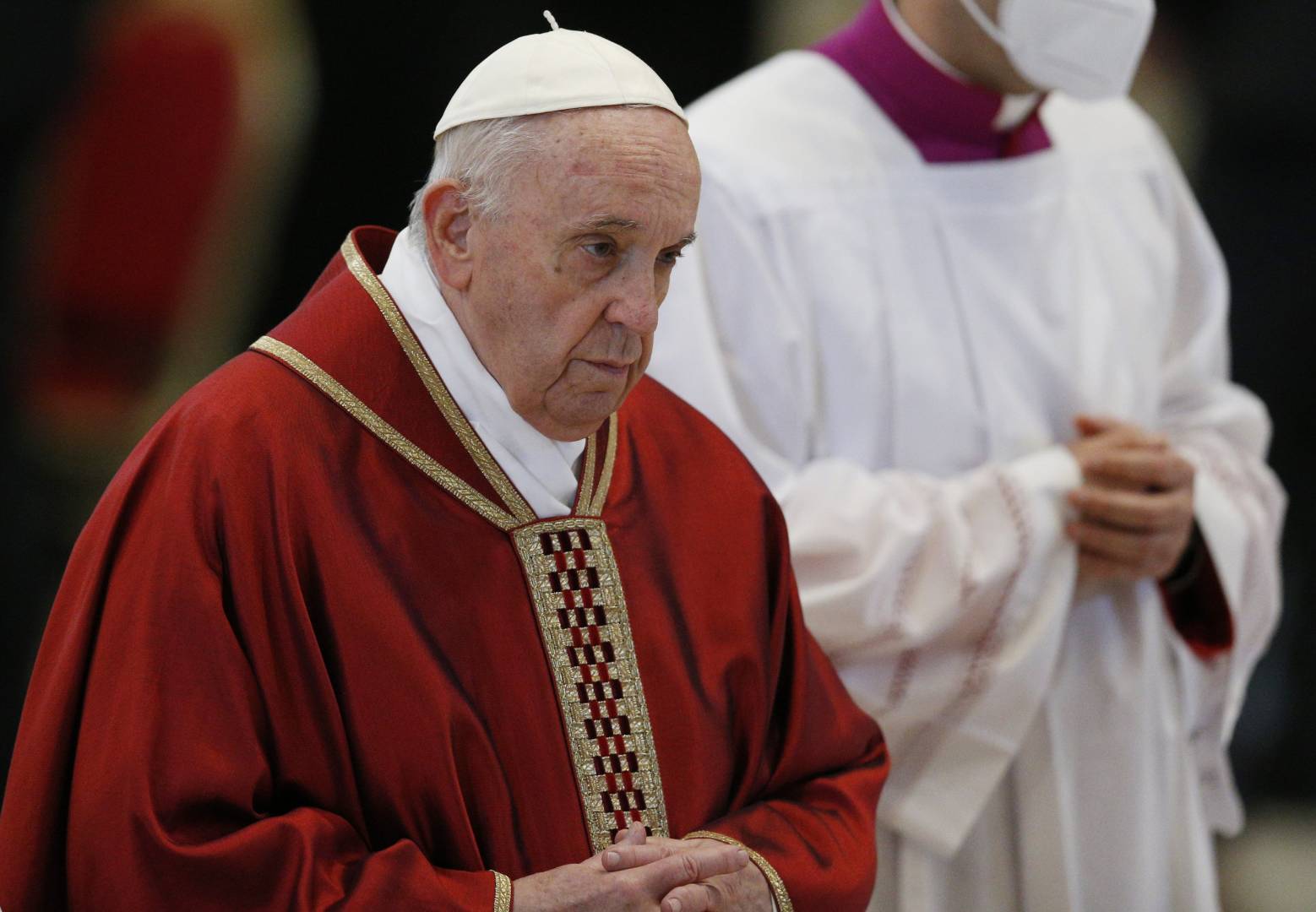 Pope Francis presides over the Good Friday Liturgy of the Lord's Passion in St. Peter's Basilica at the Vatican April 15, 2022. (CNS photo/Paul Haring)
*          *          *
However, Jesus' dialogue with Pilate also offers the occasion for another reflection, addressed, this time, to us believers and men of the Church, not to those outside. "Your people and the chief priests have handed you over to me!", says Pilate: Gens tua et pontifices tradiderunt te mihi (Jn 18:35). People of your Church, your priests have abandoned you, they have discredited your name with horrendous misdeeds! And should we still believe in you?
Also, to this terrible objection I would like to respond with the words Tolkien addressed to his son:

Our love may be chilled and our will eroded by the spectacle of the shortcomings, folly, and even sins of the Church and its ministers, but I do not think that one who has once had faith goes back over the line for these reasons (least of all anyone with any historical knowledge)… It is convenient because it tends to turn our eyes away from ourselves and our own faults to find a scapegoat… I think I am as sensitive as you (or any other Christian) to the scandals, both of clergy and laity. I have suffered grievously in my life from stupid, tired, dimmed, and even bad priests.

Such a poor result was, moreover, to be expected. It began before the first Easter with the betrayal of Judas, the denial of Simon Peter, the flight of the Apostles ... Cry, then? Yes – Tolkien recommended to his son –, but for Jesus, for what he must endure, before for us. Cry – we must add today – for the victims and with the victims of our sins.
*          *          *
A conclusion for everyone, believers and non-believers alike. This year we celebrate Easter not to the joyful sound of bells, but with the noise in the ears of bombs and explosions not far from here. Let us recall how Jesus responded one day to the news of blood shed by Galileans due to Pilate, and to the victims of the collapse of the Tower of Siloam: "If you do not repent, you will all perish in the same way!" (Lk 13:5). If you do not beat your swords into plowshares, your spears into pruning hooks (Is 2:4), and your missiles into factories and homes, you will perish in the same way! One thing of which these events have suddenly reminded us. The structures of the world can change from one day to another. Everything passes, everything ages; everything – not only "the blissfulness of youth" – wanes. There is only one way to escape the current of time that drags everything with it: to pass on to that which does not pass! To put our feet on firm ground! Easter, Passover, means passage: let us all aim to experience a real Easter this year, Venerable Fathers, brothers and sisters: let us pass on to the One who does not pass. Let us pass on now with our heart, before passing on one day with our body! 1 From the Letters of J.R.R. Tolkien, ed. Humphrey Carpenter, with Christopher Tolkien, Houghton Mifflin 1981. 2 Søren Kierkegaard, The sickness unto Death, 2,1,1 (Oxford University Press 1941).   Text courtesy of the Holy See Press Office 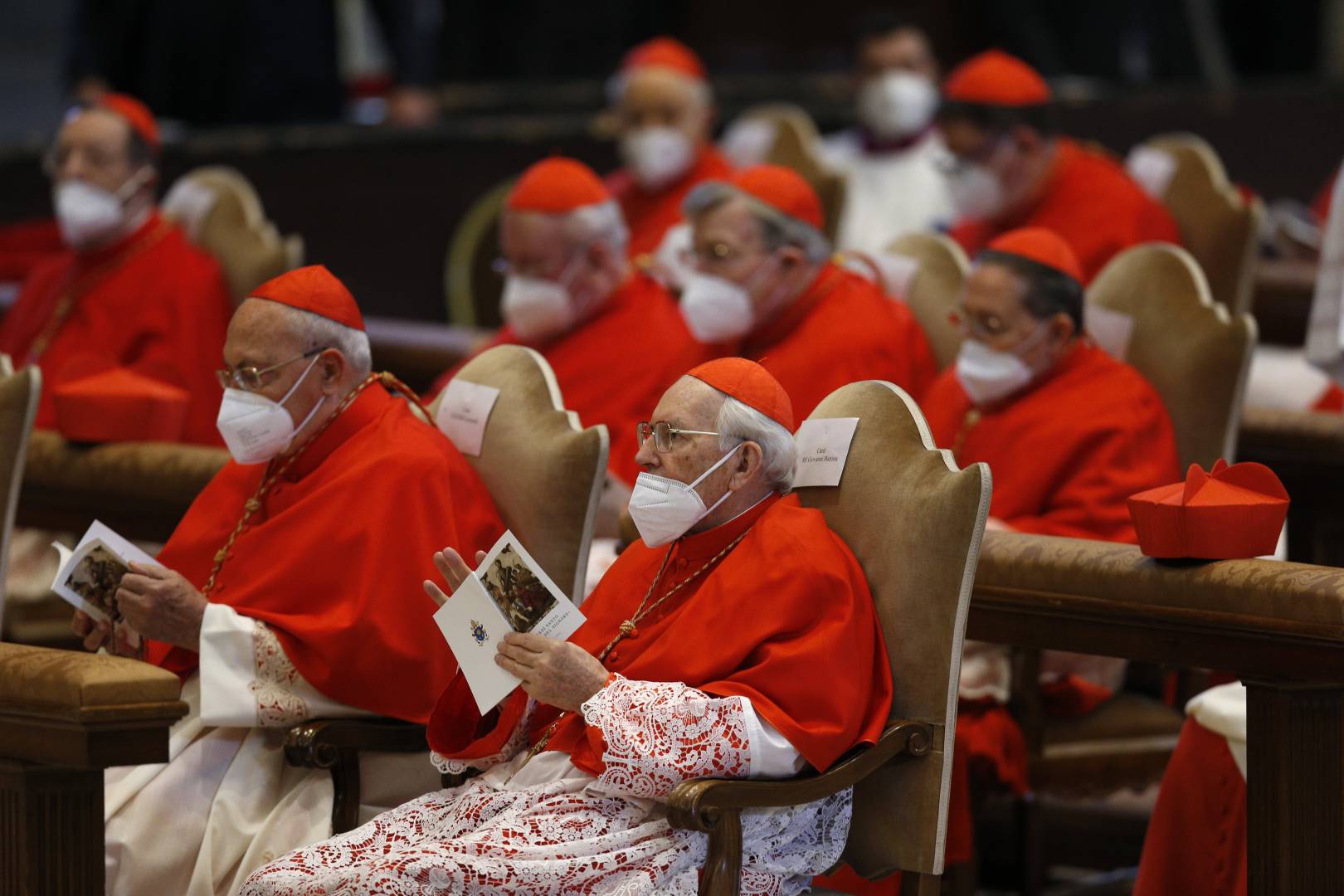 Cardinals Leonardo Sandri, prefect of the Congregation for Eastern Churches, and Giovanni Battista Re, center, attend the Good Friday Liturgy of the Lord's Passion in St. Peter's Basilica at the Vatican April 15, 2022. (CNS photo/Paul Haring)