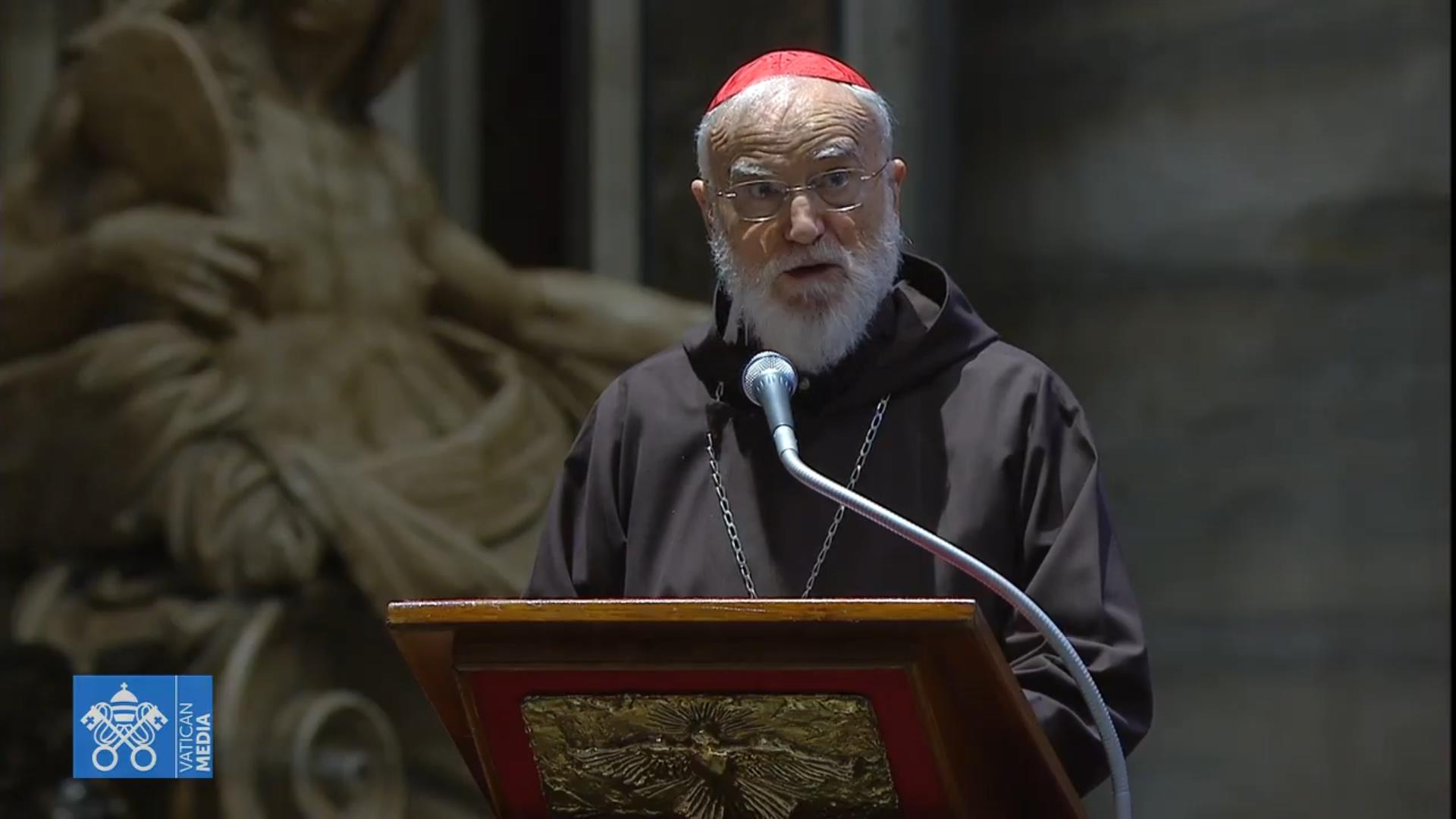 On April 2, 2021, Good Friday, Pope Francis presided over the celebration of the Passion of the Lord in St. Peter's Basilica. According to custom, Cardinal Raniero Cantalamessa, Preacher to the Papal Household, delivered the homily. Read the full text below. Join Pope Francis in celebrating Easter in the Vatican. Check out our broadcast schedule for more details!

“THE FIRSTBORN AMONG MANY BROTHERS” (Romans 8:29)

On October 3, 2020, at the tomb of St. Francis in Assisi, the Holy Father Pope Francis signed his Encyclical Letter, “On Fraternity and Social Friendship”, Fratres omnes. Within a short period, it has reawakened in many hearts the aspiration towards that universal value; has shed light on many wounds that afflict the world today; has suggested some ways to reach real and just human fraternity; and has urged everyone –both people and institutions –to work for that goal. The encyclical is addressed to a very wide audience, inside and outside the Church, indeed practically the whole of humankind. The letter spans numerous spheres of life, ranging from the private to the public sector, and from religious circles to social and political spheres. Given its universal scope, it correctly avoids limiting the discussion to aspects that characterize and belong exclusively to Christians. Towards the end of the encyclical, there ishowever a paragraph in which the gospel foundations of fraternity are summed up. Sparse in words but vibrant in meaning it reads:

Others drink from other sources. For us, the wellspring of human dignity and fraternity is in the Gospel of Jesus Christ. From it, there arises, “for Christian thought and for the action of the Church, the primacy given to relationship, to the encounter with the sacred mystery of the other, to universal communion with the entire human family, as a vocation of all (FO, 277).

The mystery of the cross that we are celebrating obliges us to focus precisely on this Christological foundation of fraternity which was inaugurated on Calvary. 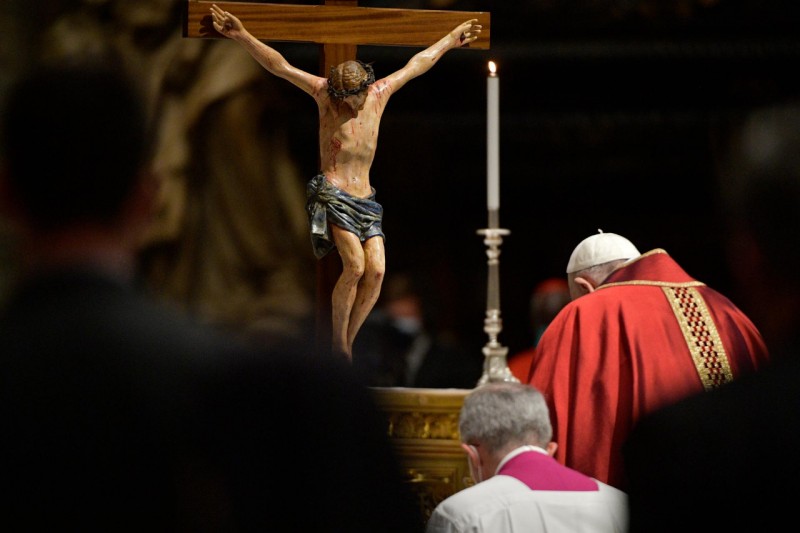 Pope Francis presides over the Celebration of the Passion of the Lord in St. Peter's Basilica on Good Friday, April 2, 2021. Photo courtesy of Vatican Media.
At times, the New Testament uses the term brother (adelfos) in its primitive, most common, meaning, that is, a sibling, someone who was born of the same father and the same mother. Secondly, people who belong to the same nation or people are referred to as brothers. Paul said that he would be willing to become anathema – separated from Christ – if it would benefit his brothers, his “kindred according to the flesh,” the Israelites (see Rm 9:3). In those contexts, as in other instances, brothers is a generic term that includes men and women, brothers and sisters. The horizon of meaning widens to include every human person, just in virtue of being such. Brother, in this sense, is sometimes translated in the Bible as neighbor. “Whoever hates his brother ...” (1 Jn 2:9) means “whoever hates his neighbor.” When Jesus says: “Whatever you did for one of these least brothers of mine, you did for me” (Mt 25:40), he intends to include every human person in need of help. Besides all these nuances, the New Testament also uses the word brother to indicate a specific group of people. My brothers are Jesus’ disciples, those who welcome his teachings. “Who is my mother, and who are my brothers? [...] Whoever does the will of my Father in heaven is my brother and sister and mother” (Mt 12:48-50). Easter marks a new and decisive development in this regard. In the Paschal Mystery, Christ becomes “the firstborn among many brothers” (Rm 8:29). The disciples become brothers and sisters in a new and very profound sense. They not only share a belief in Jesus’ teaching, but also his own Spirit, his new life as the Risen One. Significantly, only after the resurrection for the first time Jesus calls his disciples brothers. He instructs Mary Magdalene, “Go to my brothers and say to them, ‘I am ascending to my Father and your Father, to my God and your God’” (Jn 20:17). The Letter to the Hebrews uses the term in the same sense, “The one who sanctifies and those who are sanctified all have one Father. For this reason Jesus is not ashamed to call them brothers”(Heb 2:11). After the Easter event, this is the most common use of the term brother. It indicates a brother in the faith, a member of the Christian community. They are also blood brothers – but in the blood of Christ! Because Christ is also God, this fraternity is both unique and transcendent. Christ’s fraternity does not replace other types of fraternity, due to family, nation, or race, but rather it crowns them. As creatures of the same God and Father, all human beings are brothers. The Christian faith adds a second and decisive dimension. We are brothers not only because we all have the same Father in virtue of creation, but we also have the same brother, Christ, “the firstborn among many brothers” in virtue of redemption.
*          *          *
Some practical consequences flow from this truth. We build fraternity in precisely the same way that we build peace, that is starting close by, with ourselves, not with great strategies and ambitious, abstract objectives. For us, that means universal fraternity starts with the Catholic Church. For once, I want to put to the side even the second circle, namely the fraternity that exists between all believers in Christ, that is ecumenism. Fraternity among Catholics is wounded! Divisions between Churches have torn Christ’s tunic to shreds, and worse still, each shredded strip has been cut up into even smaller snippets. I speak of course of the human element of it, because no one will ever be able to tear the true tunic of Christ, his mystical body animated by the Holy Spirit. In God's eyes, the Church is "one, holy, catholic and apostolic", and will remain so until the end of the world. This, however, does not excuse our divisions, but makes them more guilty and must push us more forcefully to heal them. What is the most common cause of the bitter divisions among Catholics? It is not dogma, nor is it the sacraments and ministries, none of the things that by God’s singular grace we fully and universally preserve. The divisions that polarize Catholics stem from political options that grow into ideologies taking priority over religious and ecclesial considerations and leading to complete abandon of the value and the duty of obedience in the Church. 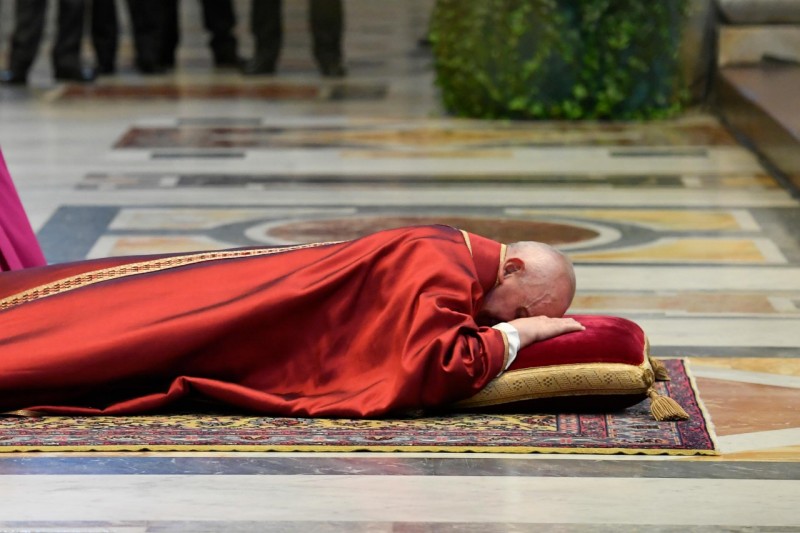 Pope Francis presides over the Celebration of the Passion of the Lord in St. Peter's Basilica on Good Friday, April 2, 2021. Photo courtesy of Vatican Media.
In many parts of the world, these divisions are very real, even though they are not openly talked about or are disdainfully denied. This is sin in its primal meaning. The kingdom of this world becomes more important, in the person’s heart than the Kingdom of God. I believe that we all need to make a serious examination of conscience in this regard and be converted. Fomenting division is the work par excellence of the one whose name is ‘diabolos’ that is, the divider, the enemy who sows weeds, as Jesus referred to him in the parable (see Mt 13:25). We need to learn from Jesus’ example and the Gospel. He lived at a time of strong political polarization. Four parties existed: the Pharisees, the Sadducees, the Herodians, and the Zealots. Jesus did not side with any of them and energetically resisted attempts to be pulled towards one or the other. The earliest Christian community faithfully followed him in that choice, setting an example above all for pastors, who need to be shepherds of the entire flock, not only of part of it. Pastors need to be the first to make a serious examination of conscience. They need to ask themselves where it is that they are leading their flocks – to their position or Jesus’. The Second Vatican Council entrusted especially to laypeople the task of translating the social, economic and political implications of the Gospel into practice in different historical situations, always in a respectful and peaceful way.
*          *          *
If there is a special charism or gift that the Catholic Church is called to cultivate for all the Christian Churches, it is precisely unity.The Holy Father’s recent trip to Iraq has made us see firsthand how much it means to oppressed peoples or survivors of persecution, atrocities, and wars to feel a sense of belonging to a universal body, with someone lending his voice to the voiceless, so that their cry might be heard by the rest of the world and hope revived. Once again Christ’s mandate to Peter, “Strengthen your brothers” (Lk 22:32) has been fulfilled. To the One who died on the cross “to gather into one the dispersed children of God”(Jn 11:52), with a humble spirit and contrite heart we lift up the prayer addressed to him by the Church before Communion at every Mass:

Lord Jesus Christ, you said to your apostles: Peace I leave you, my peace I give you; look not on our sins, but on the faith of your Church, and graciously grant her peace and unity in accordance with your will. You live and reign forever and ever. Amen. 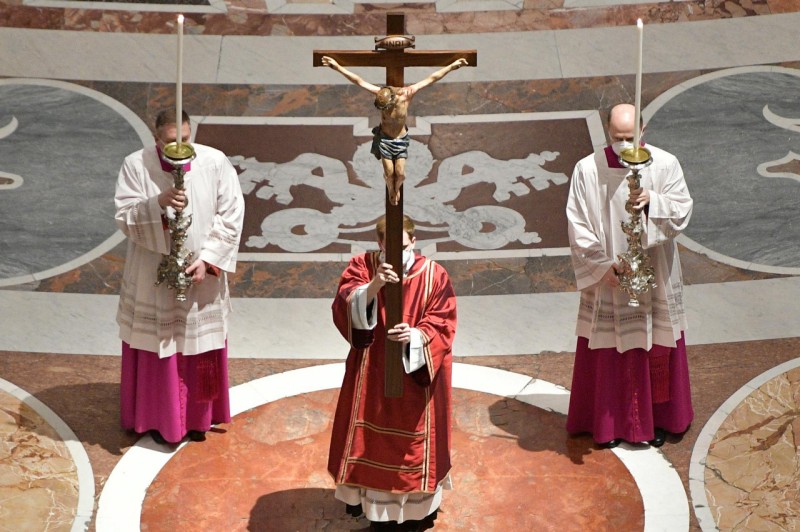 Pope Francis presides over the Celebration of the Passion of the Lord in St. Peter's Basilica on Good Friday, April 2, 2021. Image courtesy of Vatican Media.