The exception to the rule: Vatican diplomacy 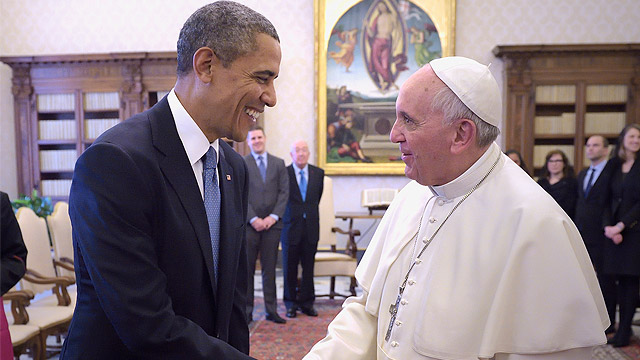 Before departing for Sri Lanka on Monday, Pope Francis delivered his annual address to the diplomatic corps, providing an occasion for reflection on the matter of politics and the Church and more specifically—in light of the recent revelation of Vatican involvement in the easing of USA-Cuba relations—on the Catholic Church’s role in global politics. 2014 was a busy year for the Church diplomatically. One example was the signing of a new agreement with the government of Cape Verde on the juridical status of the Church in the predominantly Catholic island off the coast of West Africa. The deal grants a substantial degree of freedom to the Church in its charitable works and social influence. On April 3rd the Vatican Secretary of State, Cardinal Parolin called the deal a “historic event” and nine months later the Pope announced that in February of 2015 Bishop Arlindo Gomes Furtado will be made the first Cardinal in the country’s history. As a general rule, foreign affairs and international diplomacy rank high on any government’s political and economic agendas. When it comes down to it, the highly complex and interdependent global economy of today can take much of the credit for that. But, as recent worldwide events of violence show, the question of security is also a factor. The general unpredictability and instability of both economics and war/violence foster in governments an understandably defensive, if not selfish, attitude of national protectionism. It’s quite common, for example, in the aftermath of a significant incident that affects multiple nations, to hear a minister of foreign affairs, a secretary of state or a head of state say forcefully from the outset that, “we will act according to our nation’s best interests.” Obviously, these interests will differ from nation to nation and even from one political party to another. But no degree of separation between parties would change that almost instinctual, political response of national protectionism that is a defining quality of the world of nation-states that we inhabit. Well, almost. The Vatican is officially a nation-state, or more accurately a city-state, according to the 1929 Lateran Treaty signed with Italy that gave the Pope full sovereignty and jurisdiction over a small territory in the heart of Rome. It was a significant loss of territory, in fact—known historically as the ‘Papal States’—that was the price of this unequivocal sovereignty. At the time, the loss could be considered a great blow to the influence and prestige of the Catholic Church. But considering the complexity of our current global political reality, the signing of that treaty and the emergence of the modern Vatican City State could be seen as providential. Consider the recent diplomatic efforts of the Vatican between long-time adversaries Cuba and the United States. Pope Francis took the initiative by sending heads of state Barack Obama and Raul Castro a letter calling for a closer, more open relationship, after which the Vatican in October hosted a delegation from each country to examine new possibilities. In separate December 17th press conferences the two presidents acknowledged the Vatican’s efforts and personally thanked Pope Francis. Generally speaking, what has to be recognized today is the utter exceptionality of the Vatican City State as a voice in global politics. Granted, Vatican City State is not the same thing as the Holy See, that is, the primatial See or ‘chair’ of Roman Catholicism. As the pontificate of Pope Francis has demonstrated rather pointedly, the Bishop of Rome is primarily a pastoral office, concerned with serving the spiritual needs of Catholics around the world and presiding over the local churches in charity (See the Pope’s first address, March 13, 2013). But, interestingly enough, it is exactly this pastoral mandate that in turn gives so much freedom and potential to the diplomatic arm of the Vatican City State. When we reasonably presume that the first words out of the mouth of a political leader regarding foreign affairs will be, “we will act according to our nation’s best interests,” we can also presume they would be the last words out of the mouth of the Pope. Because the “best interests” of the Church are simply the wellbeing and progress of the human family itself, it is able to mediate as a nation-state between nation-states in a uniquely trustworthy manner. It would be a mistake to conclude, as some have done in the aftermath of the USA-Cuba announcement, that this kind of approach is entirely the result of “the Francis effect”. Granted, the impetus for easing restrictions between the US and Cuba may not have come at this time otherwise, the Vatican’s approach has been consistent for many years. In 2012, Pope Benedict XVI was received in Cuba by Raul Castro, and then met privately with his brother and former president Fidel Castro. He was blasted by political—and some Catholic—conservatives in the US for giving the communist brothers any time of day. Ahead of the trip Benedict did criticize communism as an ideology that doesn’t correspond to reality and has failed Cuba, but later denounced the 50-year-old US embargo for its “restrictive economic measures.” In perhaps his most enlightening comments of the trip, Benedict said of the Church that, “We want to help in a spirit of dialogue to avoid traumas and to help move forward a society which is fraternal and just, which is what we desire for the whole world.” That, in a nutshell, is what the Vatican and the whole Catholic Church strives for diplomatically. And if we read Pope Francis’ most recent address to the diplomatic corps and the disheartening list of tragedies and conflicts afflicting many parts of the world, we will see that the Church’s political know-how is not only unique, but absolutely essential.