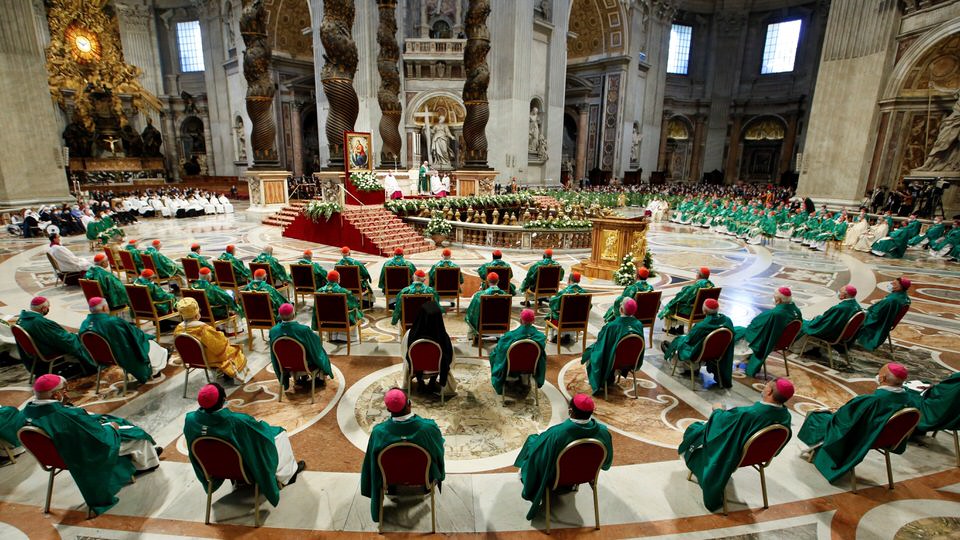 Bishops and cardinals are pictured as Pope Francis celebrates a Mass to open the process that will lead up to the assembly of the world Synod of Bishops in 2023, in St. Peter's Basilica at the Vatican in this Oct. 10, 2021, file photo. The pope told the Reuters news agency that he is preparing to name two women to the committee that helps him choose bishops for the world's Latin-rite dioceses; the current members are all cardinals and bishops. (CNS photo/Remo Casilli, Reuters)
VATICAN CITY (CNS) -- Pope Francis said he plans to name two women to the committee that helps him choose bishops for the world's Latin-rite dioceses. In an interview July 2 with the Reuters news agency, the pope seemed to indicate the women would be members, not consultants or staff members, of the Dicastery for Bishops, which currently has only cardinals and bishops as members and five bishops and two priests as consultants. "Two women will be appointed for the first time in the committee to elect bishops in the Congregation for Bishops," Pope Francis told Philip Pullella, the Reuters' Vatican correspondent. "This way, things are opening up a bit," the pope said when asked about expanding the role of women in church decision making. Reuters published the pope's remarks about women's positions July 6. Preparing nominations for the office of bishops is a long, multistep process. For most Latin-rite dioceses that are not in mission territories, the process begins with bishops submitting to their local archbishop the names of priests they think would be good bishops; once a year the bishops of the province discuss the names submitted and forward recommendations to the nuncio. The nuncio studies the lists, investigates further, solicits feedback from people who know the candidate and forwards his recommendations to the Dicastery for Bishops. The prefect of the dicastery, currently Canadian Cardinal Marc Ouellet, can make recommendations directly to the pope about transferring a bishop from one diocese to another or to an archdiocese. But if the candidate is still a priest, the members of the dicastery -- currently 17 cardinals and six bishops -- must review the dossiers and vote on the names to recommend to the pope. Although many of the members do not live in Rome, they usually meet twice a month on Thursdays to deliberate. The prefect presents the nominations to the pope, who makes the final decision. Pope Francis did not give Reuters the names of the women he intends to name to the dicastery, nor did he say when they would be announced. The pope's new apostolic constitution on the Roman Curia said, "The dicastery deals with all matters concerning the appointment of diocesan and titular bishops, apostolic administrators and, in general, the provision of the particular churches. It does so by considering the proposals presented by the particular churches, the episcopal conferences and the papal representations, and after having consulted the executive officers of the respective episcopal conference and the metropolitan (archbishop)." "In appropriate ways, it also engages in this process the members of the people of God of the dioceses in question," the document added. While the constitution opened almost all roles in the Roman Curia to lay men and women, it also reserved a special place for cardinals as the members of dicasteries. "The members of curial institutions are appointed from among the cardinals living in Rome or outside the city, to whom are added some bishops, especially diocesan or eparchial ones, insofar as they have expertise in the particular matters involved," it said. "Depending on the nature of the dicastery, priests, deacons, those in institutes of consecrated life and societies of apostolic life and lay faithful may also be appointed members." "I am open to giving (women) an opportunity" to lead Vatican offices, the pope told Reuters. "There is now a woman deputy governor" of Vatican City State, Sister Raffaella Petrini, a member of the Franciscan Sisters of the Eucharist, whom he appointed in November. "As heads of dicasteries," the pope continued, it is possible that women could lead the Dicastery for Laity, the Family and Life, the Dicastery for Culture and Education or the Vatican Library, "which is almost a dicastery." Coincidently, Cardinal Kevin J. Farrell, prefect of the Dicastery for Laity, the Family and Life, told the Jesuit-run America Magazine in late June, "I believe I could be the last cleric in charge of this dicastery." While the current secretary of the dicastery is a priest, the two undersecretaries are women: Linda Ghisoni, who heads the section for laity; and Gabriella Gambino, who heads the section for family and life. Other female leaders at the Vatican include: Salesian Sister Alessandra Smerilli, secretary of the Dicastery for Promoting Integral Human Development; Barbara Jatta, director of the Vatican Museums; Xavière Missionary Sister Nathalie Becquart, undersecretary of the Synod of Bishops; Sister Carmen Ros Nortes, a member of the Sisters of Our Lady of Consolation, who serves as an undersecretary at the Dicastery for Institutes of Consecrated Life and Societies of Apostolic Life; Natasa Govekar, director of the theological-pastoral department of the Dicastery for Communication; and Cristiane Murray, vice director of the Vatican press office.