God's will is nothing but Love: Cardinal Ouellet's farewell homily

Canada is saying goodbye to its Primate. Fittingly, Cardinal Marc Ouellet does so across the country with an interview on the CBC’s The National. (Note: the interview was recorded Thursday and was advertised to air tonight, but it has been rescheduled for Sunday.) He departs for the Vatican on Tuesday to take up his new position as the prefect of the Congregation for Bishops.
The Archbishop of Québec gave a more intimate farewell on Sunday at the shrine of Ste-Anne-de-Beaupré. There he reflected on his experience at the helm of Canada’s first diocese. He summarized his nearly eight-year episcopal ministry in Quebec City as “a call reprised one thousand-times on the same theme: the Resurrection of Christ and the faith of the Church lived perfectly by Mary, the Servant of the Lord.” The Cardinal reaffirmed that the cultural identity of Quebec has been formed by the mysteries of faith. Known for his candour in confronting his province’s challenges, he also asked for forgiveness for any hurt his words or decisions may have caused. If you missed S+L’s rebroadcast of the celebration this past Tuesday, you can watch it at ECDQ.tv, the media portal of the Archdiocese of Québec. Published below is Salt + Light’s unofficial translation of Cardinal Ouellet’s farewell homily.

THE ASSUMPTION OF THE VIRGIN MARY 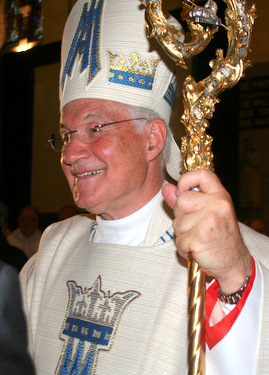