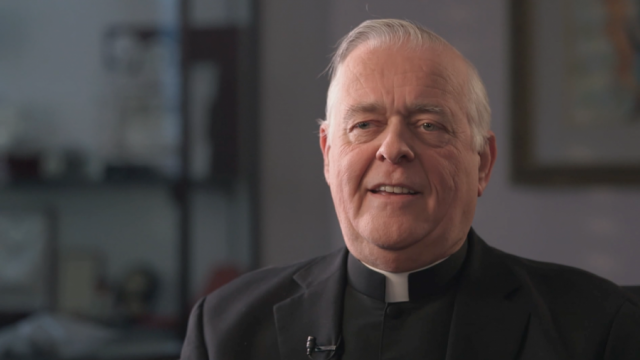 Point of View: Interpreting the Francis Effect is an S+L series that goes deeper into the important questions surrounding the person and pontificate of Pope Francis. The series consists of a selection of the full interviews from S+L’s original documentary The Francis Effect.
Tonight: Msgr. John Kozar
Monsignor John Kozar is all too familiar with the various conflicts in the Middle East and the stories of the millions of victims they produce. He runs the Catholic Near East Welfare Association that works with Eastern Churches to provide relief aid and promote local development. It’s tempting, says the Monsignor, to think of the Middle East as lost and hopeless. And that’s exactly where Pope Francis comes in. The Pope, he says, has brought new hope to many—both Christians and Muslims—by his sincere concern for all human suffering and especially for those on the margins. The question is, can one man really make a difference?  Find out in this in-depth interview with Msgr. John Kozar, airing tonight for the first time on S+L TV.
Watch Point of View: Interpreting the Francis Effect Airs Wednesday, June 10, 2015 9:00 pm ET / 6:00 pm PT Only on Salt and Light Television (check schedule for repeats)