From Princess to Poverty: St. Elizabeth of Hungary

Saint Elizabeth of Hungary by Théophile Lybaert
Rags to riches stories are the stuff of Hollywood; they capture our interest and get us dreaming. But what about going from riches to rags, voluntarily? “If I had more money,” we often hear people say “I’d help the poor. I’d do more volunteering. I’d contribute more to my community.” It doesn’t take much to acknowledge that the great works of mercy in history were all accomplished in the midst of  poverty. Think of the work of Blessed Mother Teresa, St. Francis of Assisi, St. Don Bosco and even our own dear St. André of Montreal. All of these great saints and blesseds did so much with so little. They would even go as far to say that it was by virtue of their poverty and their humble trust in God that their work was sustained. In fact, even those saints who came from wealthy families saw that poverty served to ignite charity and love of God. Eventually, their zeal led them to distribute their wealth to the poor in order to be free to serve God without attachment to possessions. St. Elizabeth of Hungary, whose feastday we celebrate today, was no exception. After renouncing royalty and vast wealth, St. Elizabeth poured out her life to serve the sick. Born in 1207, St. Elizabeth was the daughter of King Andrew of Hungary and the great-aunt of Saint Elizabeth of Portugal (sanctity ran in the family). At the age of 13, the princess married Prince Louis of Thuringia (Germany). Apparently, once when Princess Elizabeth was on her way out of the castle with loaves of bread hidden in her cloak to feed the sick and the poor, Prince Louis began to wonder what his wife was up to. When he asked her to show him what she was hiding, she released her cloak and a bundle of roses fell to the ground in the place of the bread. This is perhaps the most popular story involving the saint and it is the image associated with St. Elizabeth on many of her holy cards. 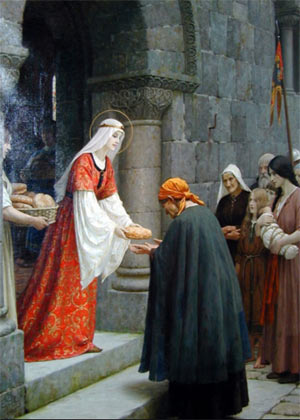 At the age of 20, St. Elizabeth became a widow. Though she was now a single-mother of three, this didn’t keep young Elizabeth from personally serving in the twenty-eight bed hospital she had built near her castle. On top of this, she was known to support 900 poor people daily. St. Elizabeth is the patroness of a wide variety of situations and occupations. Some of these are: relationships with one’s in-laws, widows, bakers, brides, nursing services and nursing homes. It is the latter that has made her the patroness of St. Elizabeth Health Care in Ontario. With a meagre staff of 4 nurses at the time of their foundation in 1908, what was then called St. Elizabeth Visiting Nurse’s Association of Ontario began their operations as the request of Archbishop F.P. McEvay. A few years into their service, St. Elizabeth’s nurses were making over 10, 000 visits a year. Today, they are still making visits.

Want to learn more about St. Elizabeth and how a special breed of Canadian nurse is still living out her legacy? Watch this episode of Catholic Focus with Mary Rose Bacani.