The music of Within Your Gates: Joe Zambon

The tone of S+L’s latest documentary is set by a lone organ. Playing the instrument is Joe Zambon, a folk singer-songwriter originally from the rural town of Iroquois, Ontario, but now residing in Toronto. A guitar joins the organ moments later, and then the hushed lyrics, “In the darkest night of my soul, God Himself is there.” 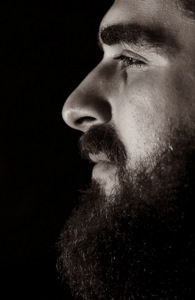 “We always think that God is a step ahead of us,” Zambon tells S+L in an interview, describing the concept of the song “God is Love”. He finds that Christians often perceive God to be somewhere else, to be found at a distant there. “The question I was asking is, aren’t those there moments really here moments?” Within Your Gates: A Pilgrim Guide to the Hold Land airs Sunday night at 9pm ET / 6pm PT. (Watch the trailer here.) The film retraces Pope Benedict’s pilgrimage to the Holy Land in 2009. S+L revisits the sites where the Pope prayed—capturing them in High Definition—and situates them in their biblical context. On Sunday, we premiere the extended version, which includes rare footage not shown in the live broadcast of the papal visit. The film transports viewers to the land where Jesus roamed, yet this is no archaeological tour. Rather, the Holy Land is seen through the eyes of a pilgrim seeking the Living God, whose presence is palpable at these ancient sites. It’s an approach that resonates with Zambon. “As Christians, we’re pilgrims journeying towards something,” he explains. “But we’re also journeying with somebody.” The song “God is Love” was released on Zambon’s latest album There and Here, which is available on iTunes. If you live in the Toronto area, you can hear him perform on Wednesday, December 8th at the El Mocambo. The concert is a fundraiser for Aid to Women, a local pro-life pregnancy centre.