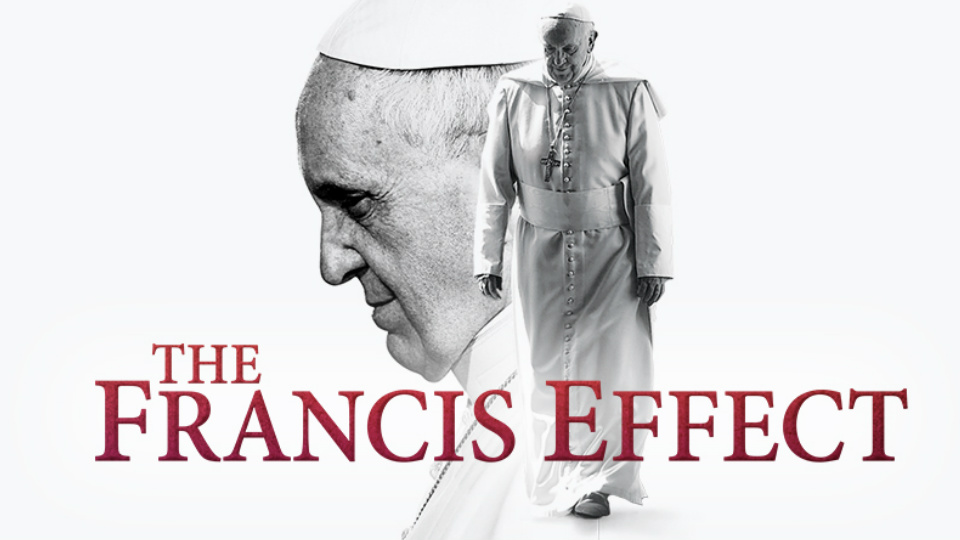 Guest contributor, Elias Crim, is the founder and publisher of Solidarity Hall, a national group blog focused on community renewal and the common good. He also co-hosts Solidarity Hall's new podcast, called Dorothy's Place. He recently reviewed S+L's 2014 documentary "The Francis Effect"...
How to understand Pope Francis? Despite the apparent dyspepsia his arrival has caused among some of the unafflictedly comfortable, it really shouldn’t be that difficult to get him right, wouldn’t you think?
Here’s a tip: I recently watched a DVD of The Francis Effect, which I suspect is probably the best single video introduction to the life, ideas and mission of Pope Francis currently available.
Produced by Salt + Light, the Toronto/Montreal-based Catholic television network, the film is a skillful blending of both Catholic and non-Catholic voices ranging from four Cardinals (Sean O’Malley, Donald Wuerl, Oscar Maradiaga, and Thomas Collins), several journalists (Diane Sawyer, Scott Pelley, Anderson Cooper, Fr. Matt Malone), and an economist (Charles Clark), among numerous other folk.
Skillfully narrated by writer, producer and director Sebastian Gomes, the composite effect is an exciting and deeply thoughtful portrait of Bergoglio the man, his historical context as “the pope of Vatican II” (as Cardinal Wuerl describes him), and his vision for moving the Church from mere self-preservation to missionary outreach.
Beginning from an insight of Karl Rahner, SJ–one of the most influential Roman Catholic thinkers of the 20th Century–that Vatican II was the beginning of a fundamental transformation of the Church into a fully global religion–the film’s on-camera witnesses help explain how the person and ministry of Pope Francis should be seen as part of the continuing realization of that shift.
The film begins with the historic resignation of Benedict XVI and the subsequent “surprise” of Francis, then moves on to the new and highly transparent way of communicating Francis has initiated, the nature and significance of his “blueprint” (Evangelii Gaudium), his call to overcome the “globalization of indifference” by reaching out to the peripheries (i.e, the borders of economic, political, physical and social exclusion), and finally his reforming mandate.
Without becoming a lesson in theology, the film happily offers numerous insights into the deeper significance of Pope Francis’ agenda and style of evangelization.
“With Evangelii Gaudium, he’s simply put down on paper what he’s already been doing,” Cardinal Donald Wuerl comments. “He’s a pastor who looks a lot like Jesus.”
Theologian Josephine Lombardi notes that Francis has called for a profound theology of women and an increase in the number of women in high-profile positions in the Church. She also comments on his spontaneity and the way seminarians can benefit from observing that unusual quality in a high-profile Church leader.
On the Pope’s Jesuit origins as a source of his reforming zeal, Fr. Matt Malone (editor of America magazine) points out that every religious order is typically focused on reform. Perhaps more important in light of Francis’ comments about “going out to the peripheries”, he observes, is the fact that the Jesuits are accustomed to working on the margins of society. Economist Charles Clark strikingly describes Francis as “the only world leader who knows the poor,” one who is aware of the many kinds of poverty–social, political, spiritual–in addition to the material kind.
Purchasers of the DVD version of the documentary also receive two additional discs of interviews conducted for the project, among them a striking conversation with Fr.Thomas Rosica, its executive producer and the CEO of Salt and Light TV. In February 2013, Fr. Rosica received a call from Fr. Federico Lombardi to become the English-language media coordinator for the Vatican Press Office immediately after Pope Benedict XVI’s resignation. He and his colleagues were astonished as they watched over 6,000 journalists from around the world descend upon Rome in the days following that event. “Given the rather imperfect state of the Vatican’s press relations prior to Benedict’s resignation, we realized this event was an opportunity for a remarkable teaching moment.”
As fully five weeks of Vatican briefings ensued, Fr. Rosica and the other press office team felt a groundswell of global interest in the advent of a new pope.
And then the great surprise happened: Cardinal Bergoglio, an Argentine and yet with European roots, a highly educated man and yet of great simplicity in his manner, became Francis.
“Francis is not afraid of anyone,” Rosica underlines, “he’s very much his own man. He reminds me of the verse from 1 John, ‘In perfect love, there is no fear’. He’s bold, a risk-taker who seems to work in perfect freedom. And he has invited the world into the beauty of the Church.”
This change in papal style frankly amounts to a change in substance, as in the way the world now relates to the Church but also, Rosica notes, in the way the Church now relates to the world. “If this doesn’t sound too Italian to say, I imagine our communications philosophy to look increasingly like Bernini’s beautiful colonnade around the front of St. Peter’s Square: that is, open, welcoming to everyone.”
And as for Pope Francis himself, “Even to millions far away, it’s as though he’s speaking to each person individually: cor ad cor loquitur, he speaks heart to heart,” as Rosica puts it. “Francis is bringing many people back to life.”
This article originally appeared on Patheos.com. Read more here.