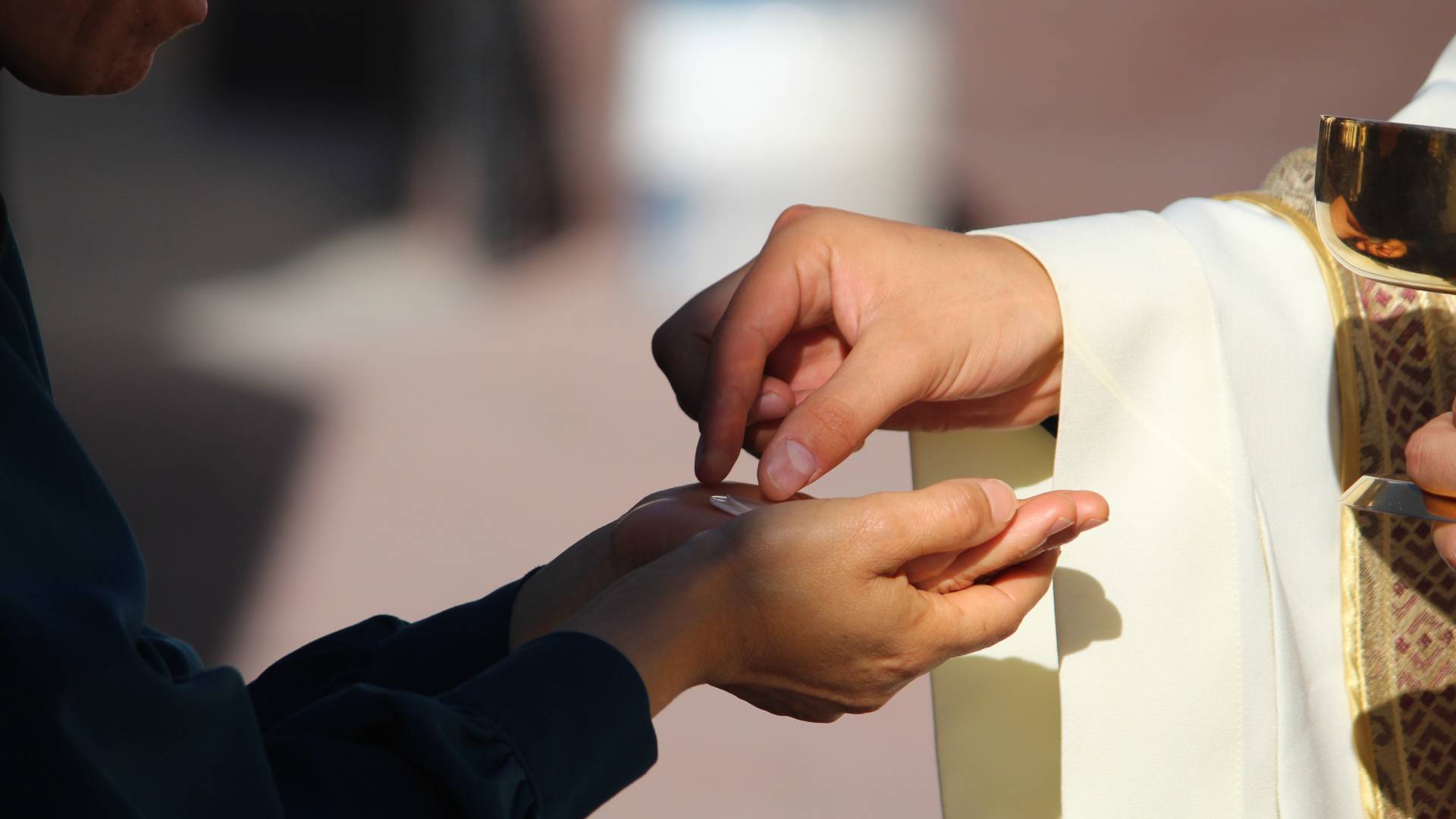 Photo by Mariana C. on Cathopic
For the next four weeks, we will be taking a break from reading the Gospel of Mark at Sunday Mass, and instead, we'll be reading chapter 6 of the Gospel of John. This is where Jesus tells us that he is the Bread of Life. It is a profound chapter full of meaning and importance.  It is with that in mind that I would like to spend a little time looking at what it means to receive Communion. (I have written before about the Eucharist and even on this particular chapter from John. I don’t wish to repeat what I’ve already written. You may, however, want to review some of it.) Just last week I was speaking with another deacon about how much irreverence there is when receiving Communion. I don’t fault people; they just don’t understand. (Remember the study in 2019  that found that only 31 percent of Catholics in the U.S. believe the bread and wine at Mass actually become the body and blood of Jesus? We explored that in depth in an episode of Deacon-structing.) I am comforted by the fact that, believe in it or not, at least they’re at Mass receiving Communion. The other side of the coin is the understanding that if we receive the Eucharist unworthily, we bring judgment upon ourselves. St. Paul writes to the Corinthians:

“So then, whoever eats the bread or drinks the cup of the Lord in an unworthy manner will be guilty of sinning against the body and blood of the Lord. Everyone ought to examine themselves before they eat of the bread and drink from the cup. For those who eat and drink without discerning the body of Christ eat and drink judgment on themselves.” (1 Corinthians 11:27-29)

So when people are adamant that we should not receive if we don’t believe or are irreverent about it, they are actually trying to prevent us from bringing judgment upon ourselves and committing sin. (Let me make an aside to say that sin is only mortal if one commits it in full knowledge and understanding of it. Since I am going to assume that most people are not aware or understand what they are doing, this is in fact not in the category of mortal sin. Still, objectively, it is a grave matter.) And then we have Pope Francis reminding us that the Eucharist is not a prize for the perfect but a medicine for the weak (Evangelii Gaudium #47). Still, whether it is medicine or not or whether we are weak or not, we must receive the Eucharist with reverence. I hope most of us had a good opportunity to reflect on this last year, when, for many weeks, and even months for some, we were deprived of Mass and Communion. Some people argued, “It’s my right to receive the Eucharist; they can’t deny me the Eucharist!” Maybe some of you felt that way. Others maybe feel that they need the Eucharist. This is our weekly sustenance. We need the Eucharist and we are suffering without it. We need our “medicine”, for we are weak. Maybe some of you felt this way. Others maybe, even though they felt sad and missed the Eucharist, were OK because they see how “absence makes the heart grow fonder”. They understood – and Pope Benedict wrote about this – that periods of "Eucharistic fasting" are good for us; we don’t have to receive the Eucharist at every Mass. Some maybe are OK with not receiving the Eucharist because they see it as an act of solidarity with the millions of people around the world who do not have access to the Eucharist – ever! They don’t have priests; they don’t have Mass, like the 2019 Synod on the Amazon reminded us. There are also many people who regularly go to Mass in our parishes but are not able to receive the Eucharist because they are not in full communion because they are not Catholic: They come perhaps because they are married to a Catholic. Others, because of unfortunate circumstances, find themselves in irregular marriages and cannot receive Communion. But they are at Mass every week and participate as much as they can in the life of the Church even though they are only in partial communion with the Church. I bet there are a few of these in your own parish. So maybe some of you are deeply aware that some of our brothers and sisters are never able to receive the Eucharist, and so you are OK with not receiving as an act of solidarity with them – as a reminder that they exist, as a reminder that we are blessed and privileged to be able to receive the Eucharist. There is spiritual maturity in that. There were a few people in my parish who felt it was important to receive Communion on the tongue. They understood why the Church restricted this practice and, as a result, chose not to receive. They suffered through it. I also see a depth of maturity in that choice. It was a simple decision that was right for them based on what they understand to be important for them to receive with reverence. I suppose there is another group of people who are neither here nor there with missing the Eucharist – they don’t go to Mass every week anyway. But maybe even for them, when it came to Good Friday or Easter Sunday, there was something they missed about it. Which one was you? Write to me and tell me. And come back next week as we go a bit deeper into why we should receive the Eucharist reverently.