Deacon-structing: The Bread of Life 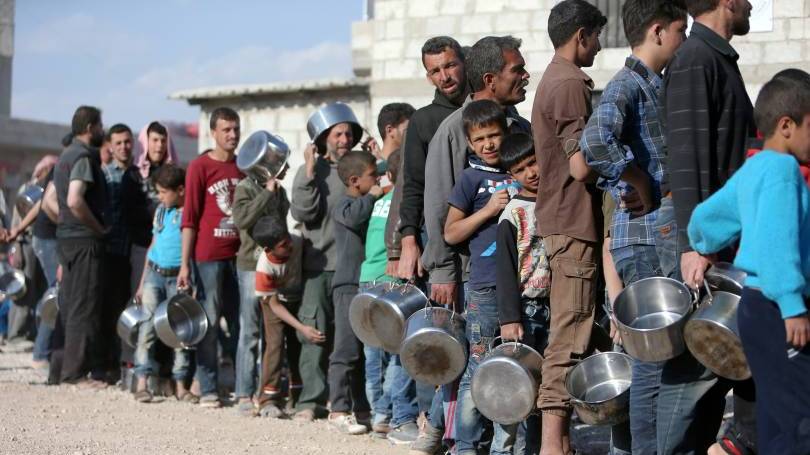 Internally displaced Syrians wait in line for food April 15 at a camp outside Damascus. (CNS photo/Ali Hashisho, Reuters)
I recently read an article by Fr. Ron Rolheiser in which he quoted a story by Christian de Cherge, the Trappist Abbot who was martyred in Algeria in 1996, who said that on the day of his First Communion he said to his mom, “I don’t understand what I am doing.” His mother replied, “It’s OK, you don’t have to understand it now. Later you will understand.” Fr. Rolheiser goes on to say that he imagines this exact conversation at the Last Supper. Jesus says, “This is my body, this is my blood, take and eat, take and drink. Do this in memory of me.” The apostles say, “We don’t understand what we are doing,” and Jesus replies, “It’s OK, you don’t have to understand it now. Later you’ll understand.” This is exactly what I imagine is going on in John, chapter 6. Jesus says, “I am the Living Bread come down from Heaven,” and the people are murmuring; they are saying, “We don’t understand what this man is talking about.” Jesus says, “Whoever eats this bread will live forever; and the bread that I will give is my flesh for the life of the world.” And they say, “We don’t understand.” And in fact, in two weeks we’ll hear them say that “this teaching is hard” (John 6:60) and many stop following him (John 6:66). Then we have one of the most beautiful conversations in all of the Gospels: Jesus turns to the twelve and asks them if they too will stop following him. Peter responds, “Lord, to whom shall we go? You have the words of everlasting life” (John 6:68). Jesus never offers a theological explanation – or any explanation at all – of what he means by “I am the Bread of Life” and “the bread that I will give is my flesh.” When people don’t understand He merely says it again and again – we’ll hear that next week – He says it six times! I suppose it’s a good thing because what explanation can He give that would make us fully understand?

It’s also good because He doesn’t ask us to understand; He asks us to believe.

“Amen, amen, I say to you, whoever believes has eternal life. I am the bread of life.”

At the end of the article Fr. Rolheiser quotes British theologian Ronald Knox, who says that as Christians we have not been very good at being faithful to Jesus: None of us truly has followed his teachings. We don’t turn the other cheek. We don’t love our enemies. We haven’t stopped committing adultery. We don’t feed the hungry, clothe the naked, visit the sick and those in prison. We haven’t gone to the ends of the earth to proclaim the Good News or to make disciples of all nations. We haven’t recognised God in the poor... These are all things that are easy to understand. But the one thing we have done, as Catholics, is the one thing that is impossible to fully understand:

We have kept the Eucharist.

The last thing Jesus asked us to do before he died was to keep the Eucharist, and this we have done even when we don’t fully understand. We don’t understand why Jesus invites us to a banquet and then serves himself as food; we don’t understand why God doesn’t demand our sacrifice so He can be fed, but rather sacrifices himself and then feeds us. As St. Paul says to the Ephesians, “He handed himself over for us as a sacrificial offering to God for a fragrant aroma." We don’t understand that God is our food for the journey – just as he fed Elijah so he could be nourished and strengthened for those 40 days (1 Kings 19:4-8); just as he fed the Israelites and sustained them for 40 years in the desert. We don’t understand that when we line up to receive the Eucharist, it’s like the refugees at the camp lining up to receive their daily bowl of rice. It’s like people in the ghetto lining up every morning to receive their daily rations, like people during the war lining up to receive their food stamps – it’s food on-the-go, food for the journey. And we don’t understand how God humbles himself under the disguise of bread and wine so that we can gaze upon him, so we can hold him, so that we can eat him – so he can be fully integrated and united with us as much as last night’s dinner is integrated into us.

Perhaps it’s not that hard to understand after all.

God wants to be united with us. God wants to abide with us and in us. He wants us abiding in him. He wants us to have eternal life united with him – in full Communion with him. And even though we come (some of us only come sometimes), we don’t fully grasp the immensity of this. God is saying, “Come. I am here. I want to dwell in you,” and we don’t really take it very seriously. Imagine that your lover, your beloved, was in prison and you could only see him or her once a week – don’t you think you’d go? You wouldn’t say, “Oh it’s a nice day, I’m going to the beach instead.” Or “I have a soccer tournament so I won’t go.” Or “I was out late last night and I want to sleep in.” You wouldn’t do that to your beloved, would you? That would be saying “no” to your beloved. Your beloved says, “I am here in a very special, real, physical way. Come be with me in person", and we say, “No – I’d rather read about you or speak to you on the phone.” If your beloved was here, you’d come. And don’t you think you’d prepare yourself before you came? You’d shower and you’d dress nicely. And just before the moment when you can finally touch your beloved and share a brief personal moment, don’t you think you’d take a moment to remind yourself what you’re going to say? How much would you enjoy that moment of communion with that beloved person? Afterwards, wouldn’t you want to savour that moment; remember it; hold on to it; be grateful for it? Imagine if a Protestant or a Muslim came to our Church and they saw that after Communion everyone, every single person, knelt in silence for just 30 seconds – 30 seconds of silent prayer, of thanksgiving and praise. Imagine what kind of Church that would be?

It may be hard to understand fully, but not difficult to imagine.

Jesus says, “I am the Bread of Life; whoever believes has eternal life.” He doesn’t ask us to understand; He asks us to believe. And when we believe in something, we do it. “Take, eat, this is my body; take, drink, this is my blood. Do this in memory of me.” Come back next week and we'll start deacon-structing the Mass, bit by bit.