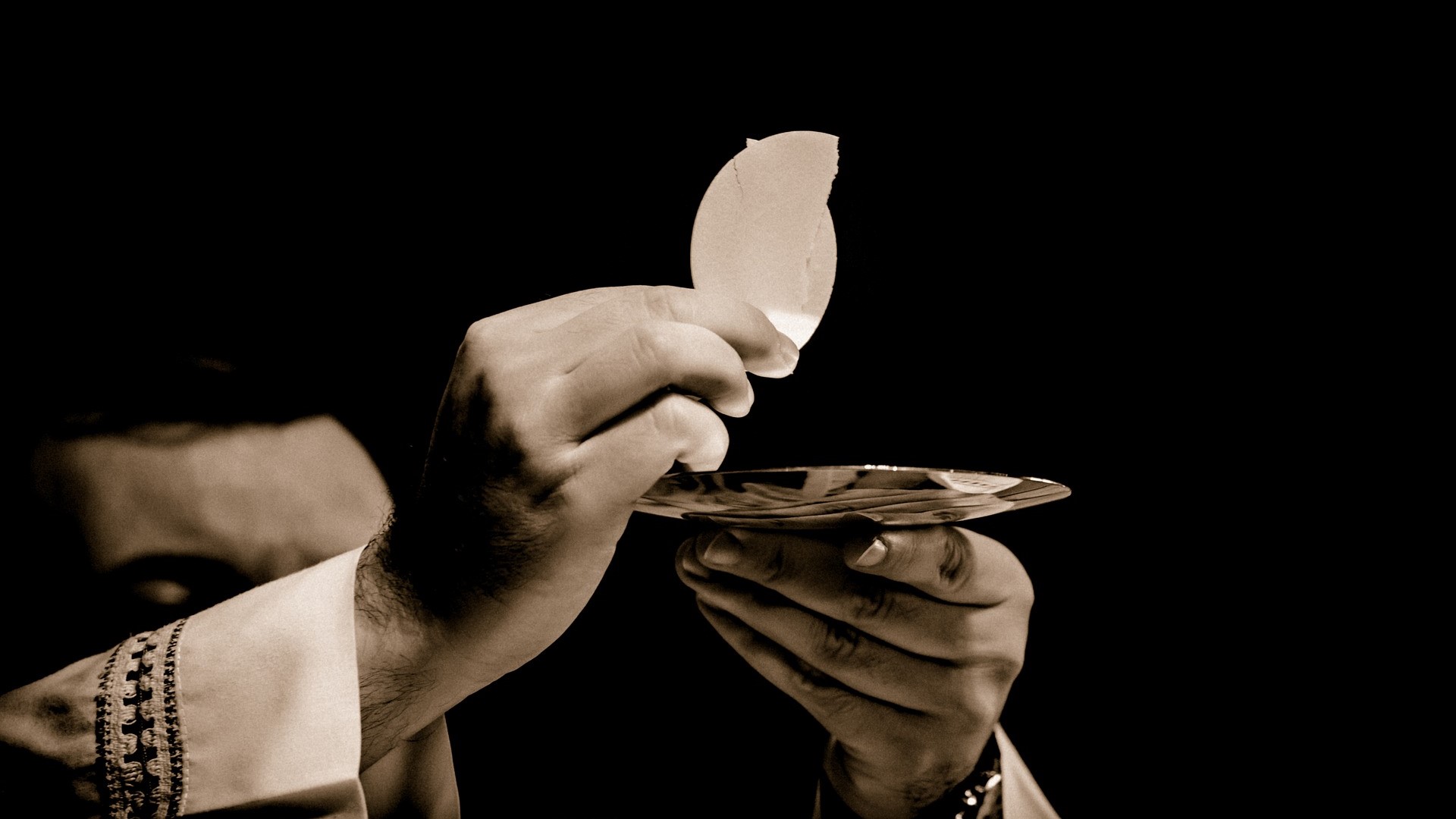 Image by Robert Cheaib from Pixabay
Since this summer  we are taking a little break from reading the Gospel of Mark (Year B) at Sunday Mass and instead listening to the Bread of Life Discourse from the 6th chapter of John, we’ve been looking at what the Church teaches about receiving the Eucharist. We began three weeks ago reflecting on Eucharistic lessons learned during the COVID-19 pandemic. Two weeks ago, we looked at the ancient hymn by St. Thomas Aquinas, Lauda Sion, and what it teaches about the reception of the Eucharist. Last week, we explored what those shared meals might have been like in the first centuries of the Church until around the 4th century when the liturgy was formalized. I think most of us have a sense of why it’s important to receive Communion and why, but a question I received from a member of my parish just two weeks ago made me realize that there may be some other aspects about the practice that we call "communicating" that may be news to us. Let’s look at those today. The question came out of the context of coming back to Mass now that restrictions are more relaxed. I told her we were open for business, that she was more than welcome to come, and that we hoped to see her soon. She responded by asking if it was ok if she came to Mass and did not receive Communion, as she didn’t quite feel comfortable with that yet.   How often should we receive? Last week, we looked at what receiving Communion may have been like in the early Church. We don’t know for certain, but we can infer from sources that in the early Church, Christians were able receive every day. In some circumstance, they were even allowed to take the Eucharist home so they could communicate themselves. St. Basil (AD 330-379) wrote:

"To communicate each day and to partake of the holy Body and Blood of Christ is good and beneficial; for He says quite plainly: 'He that eats My Flesh and drinks My Blood has eternal life.' Who can doubt that to share continually in life is the same thing as having life abundantly? We ourselves communicate four times each week…and on other days if there is a commemoration of any saint. (Letter of Basil to a Patrician Lady Caesaria)

The weekly gatherings took place on the Lord’s Day (Sunday), and so eventually that was the only day when Communion was possible. At some point, special feast days were included in the days when Mass was celebrated. It is clear from early Church documents that those who were present at Mass, if they were able, should receive Communion. With time, a deeper understanding of the Real Presence and perhaps a little too much piety meant that most people did not receive Communion very often and, if they did, did so only under the species of bread. We know that by the Middle Ages, receiving Communion at Mass was uncommon. Perhaps, in an attempt to curb those abuses we spoke about last week, the Church made it seem that the Eucharist was reserved for the holiest, and so people did not feel they could receive. So much so that the Fourth Lateran Council in 1215 decreed that the faithful, under pain of excommunication, should receive Communion at least once a year. That is still the norm today: Catholics who have been initiated must receive at least once a year, if possible during the Easter Season (see Can.  920 §1). So, it is not necessary to receive Communion at every Mass. The obligation is to attend Mass, not to receive Communion. At the same time, receiving Communion more than once a day is allowed but discouraged. If you were to attend two Masses in one day (say a wedding on Saturday morning and then the Sunday Vigil Mass in the evening), there is no need to receive twice in that day, but it is allowed. The only stipulation is that if you are to receive twice in one day, the second time must be in the context of Mass (Can. 917). You shouldn’t receive Communion at a Communion service in the evening if you went to Mass and received in the morning. The only exception is when in danger of death. So if you went to Mass in the morning and in the afternoon were dying, you could receive Communion as Viaticum. The bottom line here is that you don’t have to communicate at every Mass, and there is also no need to communicate more than once a day.   How to receive? The doctrine is that the bread and wine are the body, blood, soul, and divinity of Our Lord Jesus Christ and should be looked upon and treated as such. Therefore, utmost care must be taken when receiving the Eucharist, and it must be done “worthily” (although no one is worthy to receive the Eucharist – Christ makes us worthy. To learn more about the Doctrine of Transubstantiation, watch Deacon-structing Transubstantiation). Because of this doctrine, when receiving in the hand, we have to make sure that Eucharistic particles do not remain on our hands and that the Eucharist is consumed as soon as we receive it. (As an aside, I once chased a poor woman down the aisle because she took the host with her to the pew. I asked her to please consume it, and she did. After Mass I made a point to speak to her, and she explained that she wanted to take the host to her husband, who was sick at home. She was going to carefully wrap the host in a napkin. I believe that she was being as reverent as possible and doing her best to make sure that the Eucharist was taken care of. She just didn’t know any better. I did offer to bring Communion to her husband at home if needed.) The instructions as to the manner in which we are to receive Communion are found in the General Instruction of the Roman Missal (GIRM). In #160-161 the GIRM says:

160. It is not permitted for the faithful to take the consecrated Bread or the sacred chalice by themselves and, still less, to hand them on from one to another among themselves. In the Dioceses of Canada, Holy Communion is to be received standing, though individual members of the faithful may choose to receive Communion while kneeling. When standing before the minister to receive Holy Communion, the faithful should make a simple bow of the head. When receiving Holy Communion on the tongue, they reverently join their hands; when receiving Holy Communion in the hand, they reverently open their hands placing one beneath the other, and they consume the host immediately upon receiving it. 161. If Communion is given only under the species of bread, the Priest raises the host slightly and shows it to each, saying, The Body of Christ. The communicant replies, Amen, and receives the Sacrament either on the tongue or, where this is allowed, in the hand, the choice lying with the communicant. As soon as the communicant receives the host, he or she consumes the whole of it.

In #284-287 the GIRM explain how Communion is to be received if distributed under both species, bread and wine. Among others, it says that: Another important rule about receiving Communion is found in Canon Law:

A person who is to receive the Most Holy Eucharist is to abstain for at least one hour before holy communion from any food and drink, except for only water and medicine. (Can.  919 §1.)

This is to help us make the distinction between the Eucharist and any other food that we consume. This realization should help us with our reverence. The instructions in the GIRM are universal norms; however, each episcopal conference may have slight variations on them. For example, the United States Conference of Catholic Bishops has these instructions on their website. The Church teaches that the Eucharist is the source and summit of our Christian life. We also believe that the Eucharist is the Real Presence of Jesus Christ. It is therefore of supreme importance that we treat the Eucharist with utmost reverence, and if we are to receive Communion, we do so worthily. To learn more about the Eucharist, you may want to read my series on the Sacraments and Deacon-structing the Eucharist. Come back next week for a few more specifics about how one must receive the Eucharist.