Homily for Mass of Thanksgiving for Pilgrimage of the Relic of St. Francis Xavier 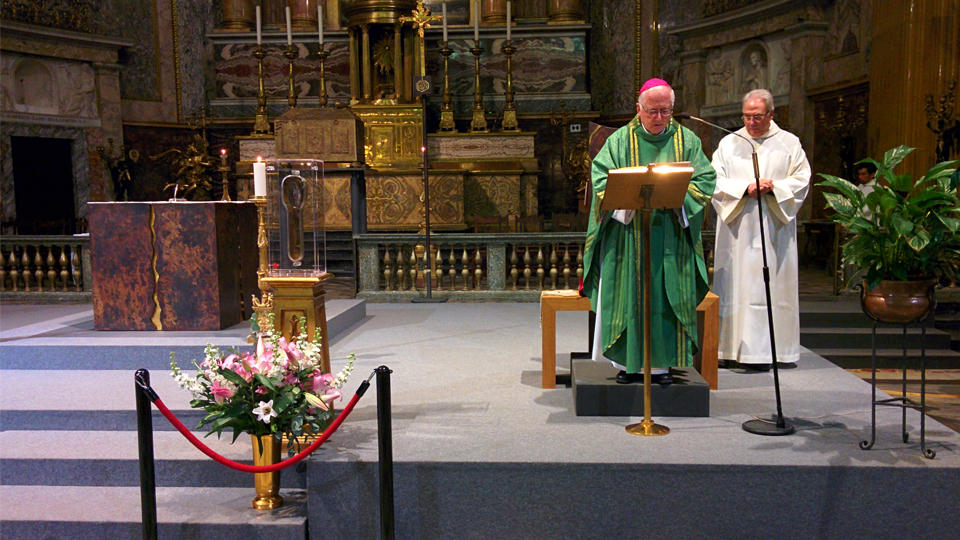 Mass of Thanksgiving for Pilgrimage of the Relic of St. Francis Xavier to Canada Church of the Gesù, Rome Fifth Sunday of Ordinary Time (Year “B”) - February 4, 2018 Last night – Feb 4th – Archbishop Terrence Prendergast presided over a Mass of thanksgiving at the Church of the Gesù in Rome for the intentions for all the pilgrims who came in Canada (approximately 80,000 people). The Relic of St Francis Xavier is now restored to the it’s normal place at side altar in Gesù Church, Rome. This Mass officially marks the close of the Relic Pilgrimage. Read Archbishop Terrence's Homily for this special mass below: A DAY IN THE GALILEAN MINISTRY OF JESUS CONTINUES TODAY [Job 7.1-4, 6-7 [Psalm 147]; 1 Corinthians 9.16-19, 22-23; Mark 1.29-39] 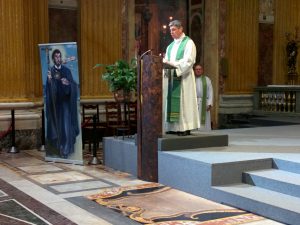 In his narrative, Mark recounted crowd reactions to Jesus' presence: “Wherever He went—into villages or cities or farms—they laid the sick in the marketplaces, and begged that they might touch even the fringe of His cloak; and all who touched it were healed”. Mark makes this statement in chapter six (6.56) after Jesus has been carrying on a healing ministry that we first encountered last week and that we see extensively this Sunday. The perceptive reader will note that, in this summary statement, the evangelist generalized the story of the woman who had been suffering from haemorrhages for twelve years (5.25-34). We heard it in the weekday readings this week. In desperation at having spent all her money on doctors and having only gotten worse, she had said to herself “if I but touch His clothes, I will be made well”. And it was so. The woman stretched out her hand and touched the hem of the garment of Jesus. She was instantly cured on touching the hem of Jesus' garment for power went out from Him and stopped the inner bleeding. In dialogue with her, Jesus drew forth a description of the act of faith behind her action, declaring “your faith has made you well”. So, when Mark spoke of crowds begging to touch Jesus' cloak, he wanted his readers—and us his hearers of the story today—to understand that faith undergirded the gesture by which the afflicted were reaching out to touch Jesus' garment. And we are to understand that they—like the woman—were made well by faith. Mark wants disciples of Jesus to grasp the deeper significance of what happened in the healing ministry. He shows this as he described a typical day in the Galilean ministry of Jesus (1.21-39). Last Sunday's gospel reported Jesus' exorcism of a man possessed by an unclean spirit at the Capernaum synagogue. It is followed, in this Sunday's gospel, by the cure of Simon Peter's mother-in-law. Both these healing acts are complemented by a summary statement which generalizes both the exorcism and the cure: “The whole city was gathered around the door. And He cured many who were sick with various diseases, and cast out many demons....” 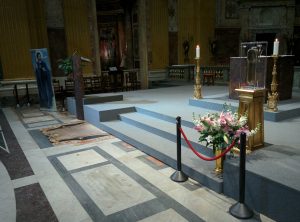 For five weeks in Canada we have experienced hands reaching out in faith to touch the Major Relic of St. Francis Xavier, drawing people from coast to coast. Many came for personal reasons, hoping for a miracle, hoping for encouragement. Many returned home or to their place of work or other activities touched interiorly, sensing they were given the grace they desired or another one. So we are here tonight to celebrate a Mass of Thanksgiving for the blessings that the Lord has poured out on us who witnessed the graces and blessings which the Lord bestowed through the intercession of St. Francis Xavier and on the occasion of the presence of his Relic among us. The Relic was well-received all across Canada, with the participation of the faithful, religious and clergy far surpassing the expectations of the planners on the local level. It was a journey sponsored by the Archdiocese of Ottawa, the two Canadian Jesuit Provinces and Catholic Christian Outreach, whose engagement was extraordinary. From its arrival in Toronto on December 26 to its departure from Ottawa, on February 3, the Relic was brought to cathedrals, parish churches, universities and schools, to a Native Canadian reservation and to a large-scale university engagement prayer service in a major hotel in Canada’s Capital. It has been the source of rich blessings from those who attended. What was most encouraging for us in all of this was the way university students took on the missionary charism, engaging people who came to see or venerate the Relic of St. Francis to speak of their faith and invite others to share it. There is great hope for the youth of our country as they develop lives of prayer, read the Bible and share it with others, testify to God’s power in their lives, celebrate it in the Sacrament of Reconciliation and the Eucharist and strive to discern God’s will for their lives. 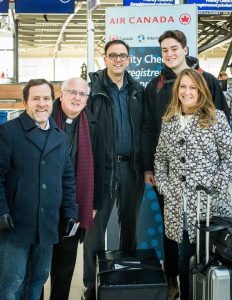 Of course, what the healings through the life and ministry of Francis Xavier during his lifetime and after his death teach us a profound lesson, namely that we, too, are charged with handing on the liberating and healing power of God in Jesus Christ in our age as in ages past. I want to thank Father D’Adamo for his encouragement of this initiative, and all the entities her persuaded to give us the necessary permissions: the Jesuit Order, the Vicariate of Rome, the Congregation of Saints and Superintendence of the Artistic and Cultural Goods of the Italian State. But our greatest debt is owed to God the Father and His Son Jesus Christ. To God be the praise and glory.