With or Without a Horse 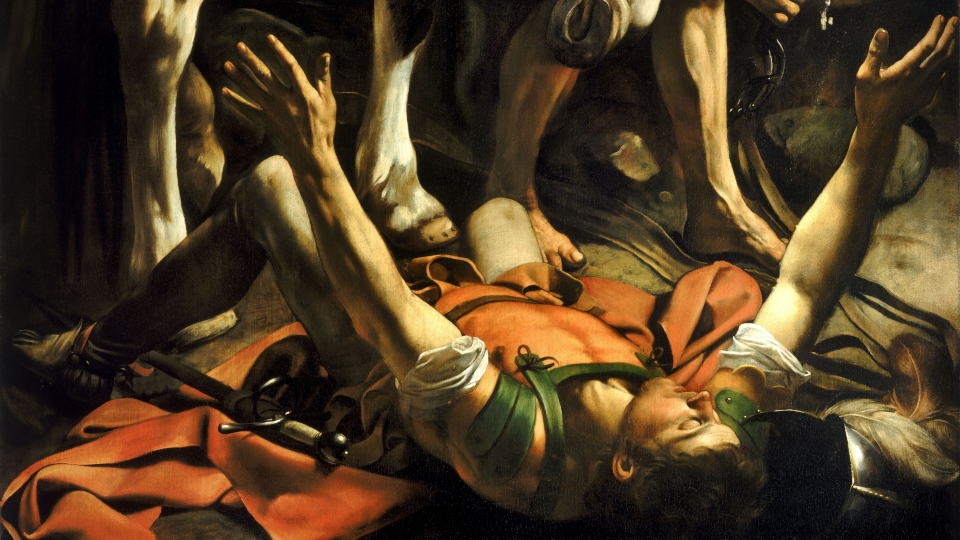 Some of you might recognize the man in the image at the top of the page. If you don’t, that’s Paul. The apostle to the Gentiles. The writer of epistles. And in that moment, the guy who’s lying on his back, thrown off his horse, a bright light shining down upon him. It’s an image that many of us can quickly conjure in our minds. Paul riding down the road to Damascus, experiencing the power of Jesus, and being changed forever because of it. That moment is one the Church celebrates in a special way today on the Feast of the Conversion of St. Paul. Now, what we had at the top of the page is really only part of the story. The full scene and the full horse he was riding can be glimpsed in the full version of the painting, a masterpiece created by Caravaggio at some point around the year 1601. 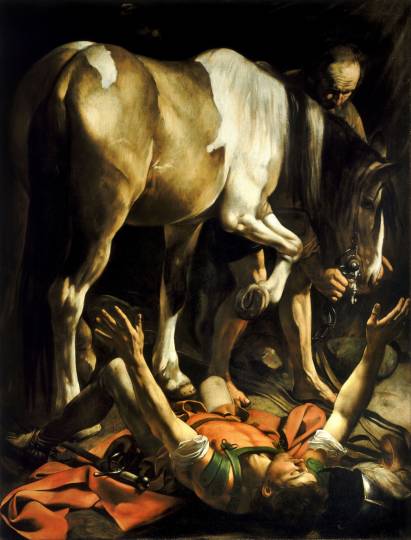 It’s one of the most famous depictions of this Biblical scene, and entitled Conversion on the Way to Damascus, this painting portrays the very moment in which Saul of Tarsus, great persecutor of the earliest Christians, experiences Jesus Christ himself, causing a powerful conversion that leads him to become the Paul we know and love. It’s a huge moment in the Christian story, and we find it in a passage from Acts of the Apostles that says this:

On his journey, as he was nearing Damascus, a light from the sky suddenly flashed around him. He fell to the ground and heard a voice saying to him, “Saul, Saul, why are you persecuting me?” He said, “Who are you, sir?” The reply came, “I am Jesus, whom you are persecuting. Now get up and go into the city and you will be told what you must do”  (Acts 9:3-6).

Well that’s interesting. We have Paul (at this point he’s still referred to as “Saul”, but it’s the same guy). We have Damascus. We have the bright light. We even have Jesus right in there. But conspicuously missing is any equine companion. Yes, Paul is certainly knocked to the ground, but it never gives any indication of him getting knocked off a horse. Which is odd because for some, if not many, if not most of us who know this story, the scene we remember in our minds is very much like what Caravaggio portrays, horse and all. No matter how many times you look through the Bible, though, Paul’s conversion experience remains completely horseless. This brings up two big questions, the first being: If there’s no horse, why in the world do we remember a horse? In psychological terms, this is often referred to as “memory distortion” or the creation of “false memories.” This skewing of reality can happen for many reasons, but in the situation of Paul and his horse, it very possibly has to do with that painting we began with. Basically, when we try to conjure a mental image of Paul’s conversion, our minds could jump back to the original biblical text but instead often more easily jump back to images of Paul’s conversion that we’ve seen. For lots of us, that’s Caravaggio’s painting or one of the many horse-containing depictions that have been artistically captured over the past couple millennia. When we think of this scene, then, we’re drawn to think of that type of image, one that clearly shows Paul thrown from his horse. Certainly there are portrayals that do provide a horseless depiction. Spinello Aretino painted a wonderful version of the scene all the way back around 1391 that clearly shows the bright light shining down upon a knocked down Paul without any horse in sight. 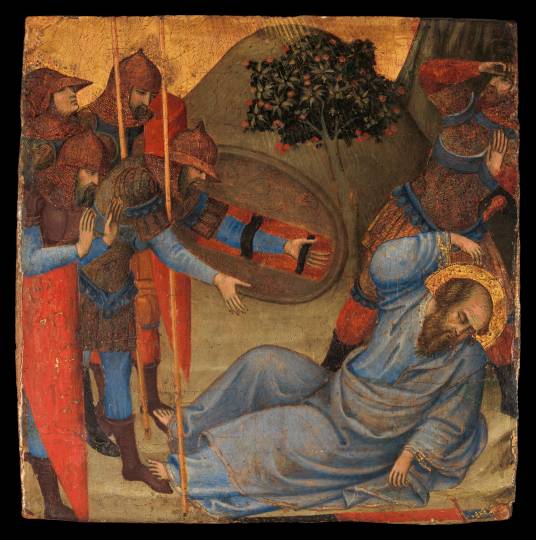 This lack of horse would continue in works by Fra Angelico in 1430, Domenico Ghirlandaio in 1479, and plenty of others from there. On the other side, though, there were actually even earlier masterpieces that included the horse. Lorenzo Veneziano, for example, painted his Conversion of Paul in 1370 with an armoured, knightly Paul falling from his steed. 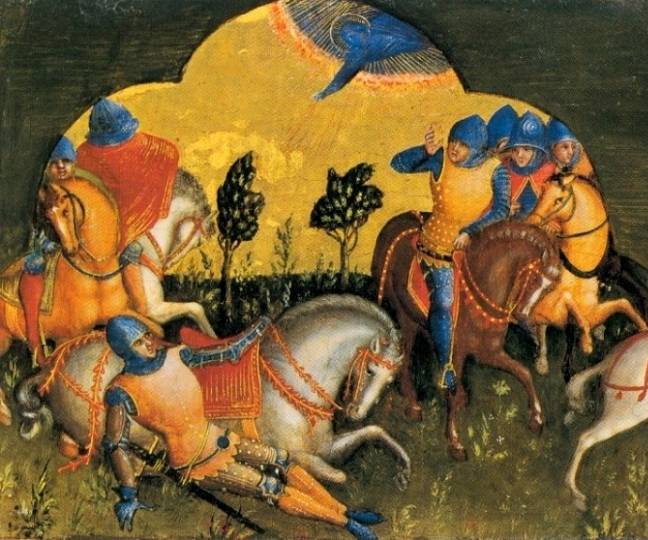 The bigger influence, however, likely came simply based on popularity. Depictions by masters like Carravaggio, Michaelangelo, Giovanni Bellini, and Luca Giordano all included a horse. Their skill and reputation as artists led to an influential admiration of their interpretations of Paul’s big moment, consequently leading many viewers to interpret the scene in the same way. That interpretation has consequently been passed down for centuries and leads many Christians today to hold on to that same view, keeping Paul’s hypothetical horse as part of the story. Now, if you’ve read this far, you probably recall that I said there were two questions for us to consider, the first being why in the world do we remember a horse? It was a fascinating question but one that, I think, is actually superseded by a second. Simply put: Horse or no horse, does it really matter? I’ll be honest. I’m tempted to say not at all. Yes, it’s true that there’s no horse in the biblical account, certainly not in any explicit way, so one could claim that it’s a misinterpretation of the text. Or maybe a tainting of the sanctity of Scripture itself! But really, horse or no horse, that’s not even close to the most important feature of this story. It’s an amazing tale of one of the most profound conversions in salvation history, a moment that changed the trajectory of faith for the entire world. And we’re focused on a horse? What really is important here is that Saul of Tarsus had a personal and profound encounter with Jesus Christ himself and then went out, living out this new connection with the Lord and spreading the Gospel to everyone he could. Whether he was riding a grand horse down the road or simply walking along with a few companions, that result doesn’t change. Sure, the impact of the fall might be slightly different, but the impact of the conversion is exactly the same. We celebrate St. Paul’s conversion today because it is a prime example of faith, conversion, and forgiveness. That moment and the ones that followed show us a man who went from being a persecutor to a preacher, a man who began the road to Damascus breathing murderous threats against the disciples of the Lord and finished it proclaiming Jesus in the synagogues. That’s powerful. And that’s why even if people might disagree about what exactly that scene looked like or how many animals were or weren’t there, there can be no disagreement on how impactful this moment was and how important this man is to the Christian story. Paul and his conversion offer an example for all of us to remember, to celebrate, and to emulate with our own lives. And that’s true with or without a horse.