Who is my brother? Benedict, Scholastica,
and the Body of Christ 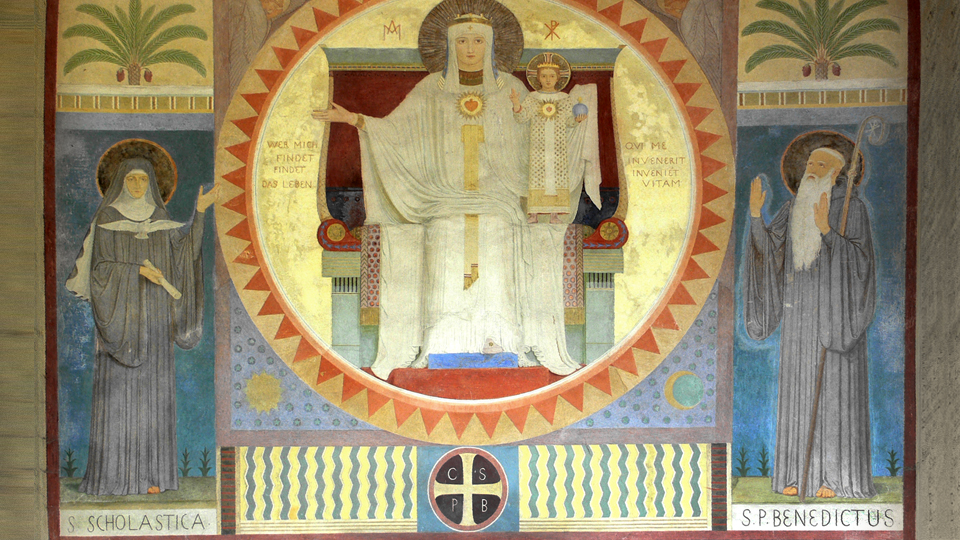 Mural from St.-Maurus-Kapelle, Beuron (Donautal), Germany (Photo: Andreas Praefcke)
Today we celebrate the memorial of St. Benedict of Nursia (c. 480-c. 547), sixth-century monk and founder of the Order of St. Benedict, which had a profound influence on the face of Christianity throughout the Middle Ages. According to tradition, Benedict had a twin sister: St. Scholastica, whose memorial we celebrate on February 10th. We know almost nothing about her except for one beautiful story tucked into the ancient biography of her brother – the second book of Dialogues written by Pope Gregory the Great between 593 and 594. It goes like this: Scholastica was a nun and a very holy woman. Once a year, she would make a trip to her brother’s home, the now-famous monastery of Monte Cassino. There was a house on the grounds of the abbey where the two siblings would meet for this one day each year and discuss the sorts of things saints might talk about: God, heaven, matters of the spirit. On one such occasion, as day drew to a close and night began to gather in, Scholastica begged her brother to stay so that they might continue their discussion through the night. Benedict refused. The rules were clear: he and his monks had to return to their monastery. Overcome with emotion at having to part so soon from her beloved brother, Scholastica put her head on the table and wept and prayed. The weather had been fine all day – not a cloud in the sky. But as soon as Scholastica finished her prayer and raised her head, all the land round about them was caught up in a terrific storm – thunder and lightning and torrential rain. Unable to leave the house and annoyed with his sister for thwarting him, Benedict stayed the night, and they continued their conversation. The next day they parted and returned each to their own monastery. Three days later, Benedict had a vision of a dove rising to heaven, and he knew that his sister had died. He sent for her body and had it laid in the tomb which had been prepared for him, and to this day the two saints, brother and sister, can be found lying side by side, entombed together in Monte Cassino.

The first time I ever heard this story I was in Spain, making my hot and weary way by foot to the shrine of St. James at Santiago de Compostela. About a week before the final destination, I spent the night at San Xulián de Samos, a sprawling medieval monastery – still occupied, though by greatly diminished and aging numbers. On the walls of one cloister was a series of dramatic floor-to-ceiling murals depicting scenes from the life of St. Benedict, including the miracle of St. Scholastica, and our monk-guide explained them to us as we toured the monastery.

Monastery of San Xulián de Samos (Photo: José Antonio Gil Martínez)
The story made a great impression on me – probably because I myself have two brothers, and although I admit our conversations do not always revolve around heavenly things, I can identify with Scholastica’s desire to prolong her time with her brother. Since I left home, except for one very brief period, I have never lived close enough to my brothers to see them regularly. Unlike Scholastica, I at least have the benefit of modern technology, and even then our phone/Skype meetings have the element of a marathon about them and usually end reluctantly. There is a special bond between siblings. Scientifically speaking, they are the people in all the world who are most like us. There is no one else, not even our parents – who gave us their genetic material – whose genetic make-up so closely resembles our own. And who can better understand those formative years of our childhood that helped to create the adults we are than those brothers and sisters who shared the same parents, the same upbringing? Although my brothers and I had our share of altercations and sibling rivalry growing up, we also now have shared memories of adventures and mishaps, sorrows and joys, and they are the two people who know me and understand me best and the two people I am closest to in all the world. I know how fiercely I love them and how much they have sacrificed for me. And so I can understand the great love that prompted Scholastica to implore God for just a few hours more with her brother – a love so great that it moved God to grant her request in such a dramatic and memorable way.

Here are my mother and my brothers

But as a Christian, that natural love and affection I have for my brothers should inform the way I approach my relationship with all people and especially with other Christians. St. Paul says in his letter to the Galatians: “For through faith you are all children of God in Christ Jesus. For all of you who were baptized into Christ have clothed yourselves with Christ” (3:26-27). And Jesus himself says in Matthew’s Gospel: “Whoever does the will of my heavenly Father is my brother, and sister, and mother” (12:50). To say that all the baptized have been transformed into new beings through Jesus Christ with God as our Father is not mere cozy sentiment. It is reality. And to say that another human being is my “brother or sister in Christ” indicates a real relationship with profound implications regarding my responsibilities toward them. This is by no means an easy concept, and the close connection I have with my natural brothers stands for me as a high bar to aim for in my dealings with others – strangers and even enemies, as well as friends.

One Body in Christ

But there’s more. In one of his most famous teachings, St. Paul refers to all the baptized as members of one body with Christ as its head (Rom 12:4-5; 1 Cor 12:27; Eph 1:22-23, 4:15-16; Col 1:18, 24). This body is no less real and immediate for being a mystical body. We are not only members of the same family but also cells of the same body by virtue of the living grace – the lifeblood – that flows through us as a consequence of the sacraments we receive. And so all the baptized are bound more closely to each other than to any member of our natural family purely on the basis of that biological and sociological bond. Frank Sheed expresses this thought and its implications beautifully in his book, Theology and Sanity:

“Our relationship to one another as members of Christ’s Body is closer than any possible natural relationship. Each one of us is more closely related to every other member of the Church by this life of grace than to his own mother by the life of nature. ‘And you are Christ’s body, organs of it depending upon each other’ (1 Cor 12:27). This is easy enough to say. But if we were ever to let ourselves look squarely at it and really try to live by it, its immediate effect would be a remaking of ourselves so thorough that nature shrinks from it; and the ultimate effect would be to renew the face of the earth.”

When I look at the love I have for my brothers and the love St. Scholastica and St. Benedict had for one another, and then I consider that I am called to love those around me with an even greater love, my mind has difficulty understanding how such a thing is even possible. As Sheed says, “nature shrinks from it.” But Jesus says to us: “As the Father loves me, so I also love you” (John 15:9), and then a few verses further on, he gives us his new commandment: “Love one another as I love you” (John 15:12). That we with our fallible and selfish human natures should love everyone in the same way that Love Himself loves His Only Begotten Son. How can such a thing be possible? I don’t know. But what if I tried? What if we all did? “The ultimate effect would be to renew the face of the earth.”