When Churches Apologize | One Body 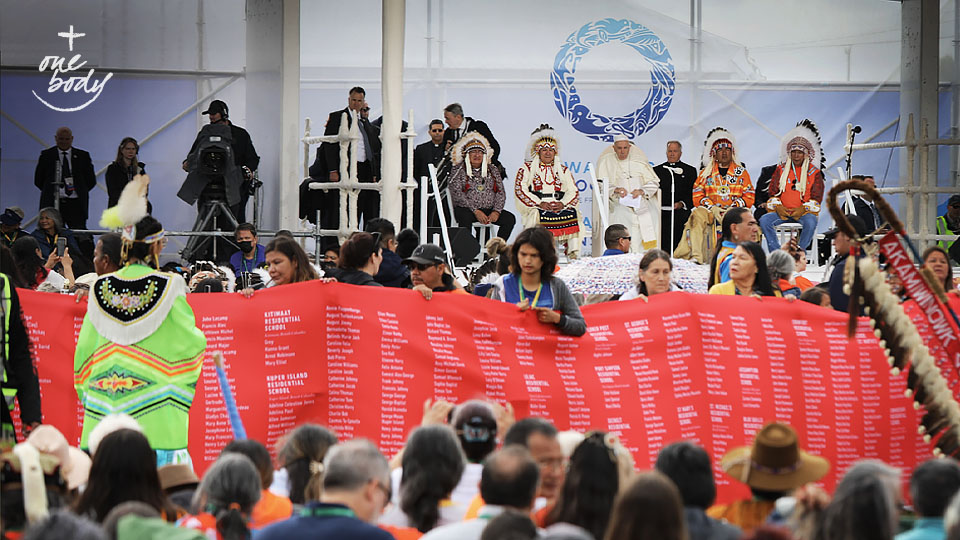 Pope Francis Apologizes on behalf of the Catholic Church

On two occasions this past year, Pope Francis has expressed his deep sorrow for the pain and trauma suffered by former students of residential schools and their descendants. At the end of March, he met with delegations of First Nations, Métis and Inuit Peoples in Rome where he stated: “Listening to your voices, I was able to enter into and be deeply grieved by the stories of the suffering, hardship, discrimination and various forms of abuse that some of you experienced, particularly in the residential schools. … I ask for God’s forgiveness and I want to say to you with all my heart: I am very sorry. And I join my brothers, the Canadian bishops, in asking your pardon.” Following this initial meeting, he travelled to Canada in July where he re-iterated his heartfelt apology for Catholic involvement in residential schools and again joined with the Canadian Bishops in asking pardon. He stated: “Today I am here, in this land that, along with its ancient memories, preserves the scars of still open wounds. I am here because the first step of my penitential pilgrimage among you is that of again asking forgiveness, of telling you once more that I am deeply sorry.... I ask forgiveness, in particular, for the ways in which many members of the Church and of religious communities cooperated, not least through their indifference, in projects of cultural destruction and forced assimilation promoted by the governments of that time, which culminated in the system of residential schools.”

Pope Francis arrived in Edmonton on July 24, began his visit on July 25 at Maskwasis, the site of a former residential school, and concluded it in Iqaluit on July 29. Drawing on the theme of Walking Together, the visit included a number of private and public events with an emphasis on Indigenous participation, especially the participation of Survivors. The five-day span of the visit, which the Pope described as “penitential pilgrimage,” provided time to develop various aspects of the papal message. In addition to his heartfelt and solemn apology, he spoke of his admiration for Indigenous culture and spirituality, as well as his profound sadness at the lasting impact of colonization and the catastrophic impact of the residential school system. He begged forgiveness for abuses, including sexual abuses, committed by some members of the Catholic Church as well as for the cultural destruction and forced assimilation endured by the Indigenous community. Recognizing the evil of clergy sexual abuse, he made a firm commitment to ensure that it would never happen again. On the final day of his pilgrimage, he reaffirmed his strong sense of closeness to the Indigenous people of Canada: “I can truly say that, while I came to be with you, it was your life and experiences, the Indigenous realities of these lands, that have touched me, remained with me, and will always be a part of me. I dare say, if you will allow me, that now, in a certain sense, I also feel a part of your family, and for this, I am honoured.” And, in response to a reporter on the return flight to Rome he readily acknowledged that members of the Church had participated in genocide. He said: “Yes, genocide is a technical word. I didn’t use it because it didn’t come to my mind. But I described it as true. Yes, it was genocide, yes, yes, no problem. You go ahead and say that I said yes, it was genocide.” Yet, despite all that was said during the visit and immediately after, some commentators found a “gap” in what was not said. Specifically, while he spoke clearly of the evil committed by members of the Church, Pope Francis did not address the role of the Church as an institution in the harm suffered individually and communally by Indigenous People. What is at stake in this matter is the question of whether or not the Church, as Church, can sin. Not surprisingly, this is a topic which has been addressed in ecumenical dialogue.

Can the Church Sin?

In the 1998 World Council of Churches study on The Nature and Purpose of the Church, the section on “The Church and Sin” (pp. 20-21) begins with the assertion that all churches agree there is sin, corporate and individual, in Church history. It then goes on to summarize three different approaches to the way churches understand this reality: The text concludes by asking if the churches could agree to the following proposition: “The relationship between sin and holiness in the Church is not a relationship between two equal realities, because sin and holiness do not exist on the same level. Rather, holiness denotes the Church’s nature and God’s will for it, while sinfulness is contrary to both (cf. 1 Corinthians 15:21-26).” A more focused reflection on the relationship between church and sin is found in the Reformed–Roman Catholic Dialogue of 1984-1990. Its report, Towards a Common Understanding of the Church, develops two conceptions of the Church as “Creation of the Word” and as “Sacrament of Grace.” It claims that these can be seen as complementary with each other but also as poles of a creative tension. This topic is explored in the report’s third chapter, which includes a full discussion on God’s fidelity and human sinfulness. Both churches recognize that, “whatever the effect of sin on persons and institutions, the holiness of the preaching of the Word and of the administration of the Sacraments endures, because the gift of God to the Church is irrevocable.” However, the Reformed think that “the Church can experience moments when despite the exemplary witness of individuals its true identity is obscured by sin beyond recognition.” On the Catholic side, “it is thought that human sin, even if it goes so far as to mar greatly the signs and institutions of the Church, never nullifies its mission of salvation and never falsifies essentially the proclamation of the truth, because God unfailingly guards the Church.” In brief, the two churches think differently about the relation between the Church and the Reign of God, with the Reformed insisting more on the promise of a “not-yet” and the Catholics underlining more the reality of a gift “already-there.” (Article 122) The authors of the 2005 report of the Canadian Roman Catholic/United Church of Canada Dialogue on Sin, Reconciliation, and Ecclesial Identity state their support for the findings of the international Reformed–Roman Catholic dialogue.

Whether welcomed or criticized, it is clear that an apology is only an important first step on the lengthy journey towards reconciliation. In the words of Pope Francis, “Any truly effective process of healing requires concrete action.” With this in mind, the Canadian Conference of Catholic Bishops, at its most recent plenary assembly from September 26-29, 2022, has pledged their commitment to: Recognizing that reconciliation is a long journey, the bishops said they will report annually on progress made on these pledges, and will take additional steps to strengthen relationships and dialogue at the national and local level. Sr. Dr. Donna Geernaert, SC, served for 18 years in promoting ecumenical and interfaith relations for the Canadian Conference of Catholic Bishops. She has been a staff member, consultant, and member of numerous multilateral and bilateral theological dialogues in Canada as well as internationally.