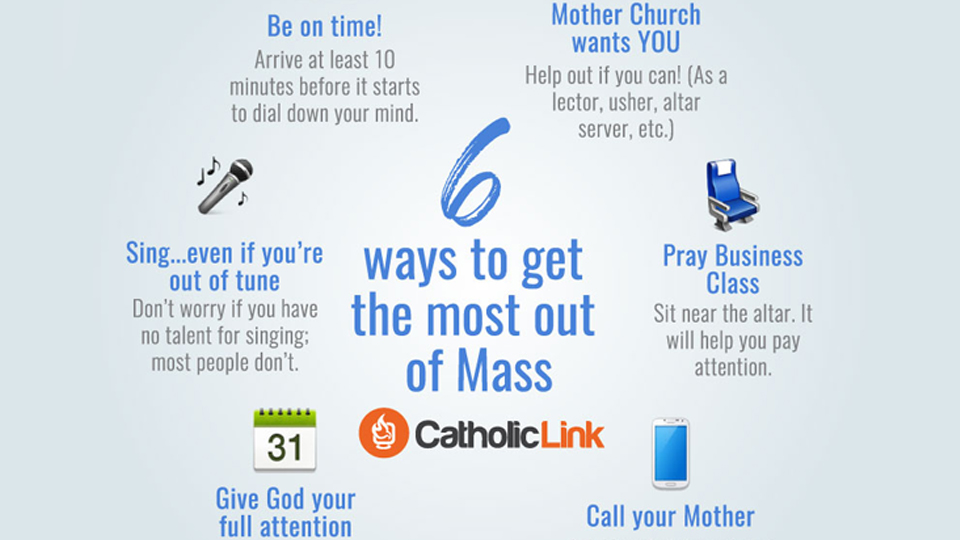 Welcome to S+L’s Weekly News Round-Up. As part of my job, I come across many interesting Catholic news stories on a daily basis. Some of them I'll cover on Perspectives Daily and the others I’d like to share with you on this blog.  This column is where I’ll point out some of the more interesting news pieces that I’ve come across over the past week! Enjoy!
This week, I came across this neat infographic on my news feed that puts into context interesting thoughts about how we can get more from our daily, or at least weekly, Mass. After some research, I found it came from Catholic-Link, a cool website that has great Catholic resources that are easy to share on your social media channels. For example:

Here's another one: a quick explanation of the different liturgical colours worn during the year. So share away. 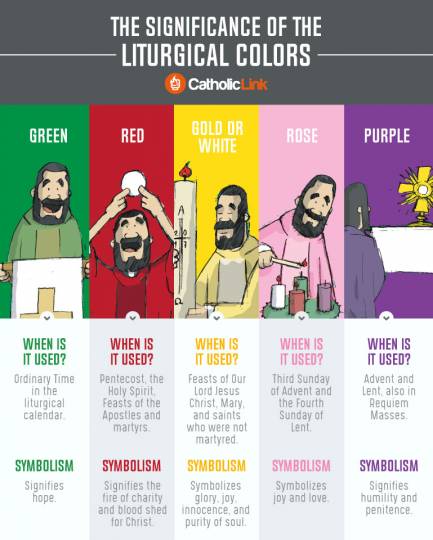 The Knights of Columbus has produced and released a multipart video series that people are starting to notice. It's called "Ordinary and Extraordinary Everyday Heros". It profiles the stories of some remarkable Knights, whose lives and actions are in line with the mission of the Knights of Columbus. Some of the videos are absolutely spectacular. Check out this one about singing seminarians. By now I'm sure you've heard with great relief that all 12 boys and their soccer coach were successfully freed after being stranded in a network of underwater caves in Thailand for over two weeks. Videos have been surfacing all week about the extreme conditions that the rescuers had to face to save the kids. It was a rescue that was nothing short of a miracle. With the whole world watching and praying, it's truly amazing what the strength of prayer can achieve. Lately, there's been a lot of buzz in the news about the dangers of single-use plastics (straws, coffee cups, coffee cup tops, etc.) on the environment. To be perfectly honest, I found it hard to visualize the harm. After all it's just a straw, right? Thankfully, the recent announcement of Starbucks Coffee, ditching disposal plastics by 2020, has really brought the magnitude of this environmental issue to the forefront. Since many of us never really see the harm that happens when you throw that straw away after your Salted Caramel Mocha Frappuccino, I thought I might share this video that helps put things into context. After all, protection and care for the environment is something that Pope Francis is insistent about and shouldn't we all be? One final piece for the week. As some of you may or may not know, St. Gianna Molla is one of the patron saints of Salt + Light TV. So you can imagine that I was particularly interested to learn that her older brother is also enroute to sainthood. The event of her older brother's canonization would put St. Gianna on a unique list of saints that have siblings that are also saints like: Saints Benedict and Scholastica, Saints Gregory and Basil, and of course Saints Andrew and Simon Peter.
Father Enrico Beretta (St. Gianna's older brother), was a Franciscan Capuchin friar , and he was also a surgeon who served as a missionary in Brazil for 33 years until his death in 2001. The Cause for canonization has begun. There's more on his life here.
That's it for this week! Be sure to check in with us again next Friday for more interesting news and stories.