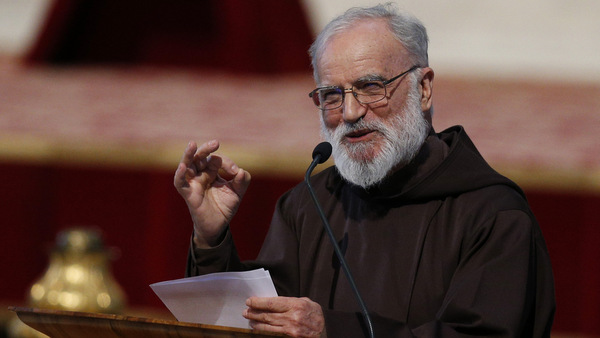 The Lenten Season is, par excellence, the time of inspiration.  At this time, we take deep breaths; we fill the lungs of our soul with the Holy Spirit and thus, without our realizing it, our breath will have the scent of Christ. Fr. Raniero Cantalamessa, First Lenten homily for 2015 reflecting on Evangelii Gaudium

A good friend of mine recently shared with me a website promoting the premiere of  National Geographic's film Killing Jesus.  The movie charts the political and historical conflicts that led to the execution of Jesus. Its main draw being that it explores the differing perspectives on who Jesus was and how that affected the telling of his story. All of which got me thinking about the Passion narrative; because, every time I think about it, I can’t help but ask myself whose actions would be my own? Some years ago I imagined myself as Mary Magdalene or Veronica but more recently I’ve been wondering what if I’m Peter or worse, Judas? Trying to understand the motivations of those who interacted with Jesus is not easy. Most of the time, I’m left thinking, what's that even supposed to mean? So to help me dive deeper into the story, I’ve been revisiting the homilies of Fr. Raniero Cantalamessa. Anyone who has read or listened to Fr. Cantalamessa knows that there’s a very good reason that he is the preacher to the papal household. His homilies are excellent.  There are several reasons, but I’ll keep it to three. POETIC USE OF IMAGERY First his poetic use of imagery, I recall  during the Good Friday service in 2013 he made reference to a short story by Franz Kafka called an Imperial Message. He used the story as a metaphor for ourselves in relation to Holy Spirit. And if you’ve ever read any Kafka you know his surreal, nightmarish depictions will leave you disturbed. But given Fr. Cantalamessa’s point - that we need to get out of the way and let the Holy Spirit do its work - it was a point worth making! ACCESSIBLE Secondly, even though I gain a tremendous amount of insight (theological and historical) from his homilies they’re always accessible. He has this amazing way of providing broad scope but always bringing it back to everyday realities  (not unlike my other favourite homilist, Papa Francesco). For example, in his homily for the 2014 Good Friday service he reflected on Judas and his role in Christ’s Passion. And boy did he bring it home:

One can betray Jesus for other kinds of compensation than 30 pieces of silver. A man who betrays his wife, or a wife her husband, betrays Christ. The minister of God who is unfaithful to his state in life, or instead of feeding the sheep entrusted to him feeds himself, betrays Jesus. Whoever betrays their conscience betrays Jesus. Even I can betray him at this very moment — and it makes me tremble — if while preaching about Judas I am more concerned about the audience’s approval than about participating in the immense sorrow of the Savior. There was a mitigating circumstance in Judas’ case that that I do not have. He did not know who Jesus was and considered him to be only “a righteous man”; he did not know, as we do, that he was the Son of God.

GREAT CONNECTIONS And lastly, I love his homilies because he makes connections to great literature and music which reminds me that I’m joined with all humanity in contemplating the great questions of life. All of which is very inspiring.  So in the words of Fr. Cantalamessa,  I invite you to take some time this week to be inspired, so that you too may have “the scent of Christ”. ________ From March 30 to April 6 Salt + Light will bring you full coverage of the Holy Week and Easter liturgies led by Pope Francis. Photo credit: CNS