The Triumph Behind the 2010 Winter Olympics

They seem at odds, don’t they? Christianity that encourages us to foster virtue – everything that’s nice and sweet, gentle and kind; versus Olympic ambition (supplemented by the Own the Podium program) that encourages our athletes to go for gold, to win, win, win! Own the Podium has been criticized as un-Canadian, as rude, as too focused on winning. 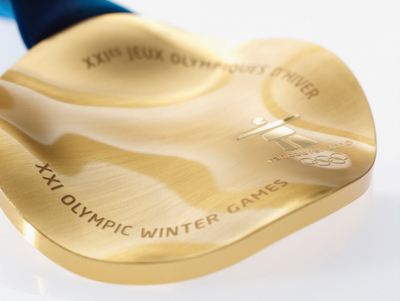 And I say, THANK GOD THE PROGRAM EXISTS! I’ve slowly been realizing how our culture has fallen prey to “political correctness”, “equality for all”, the mentality of “it’s okay, everyone’s a winner”. Even our Christian culture is succumbing to that. Who says we must be quiet when we are good at something? Jesus says not to lord ourselves over others, but He also calls a spade a spade and praises someone for their good works over the weakness of another. AND is it really virtue not to criticize someone even if it can help them, just because we don’t want to make that person feel bad? That’s just plain cowardice. It is correct that you cannot measure the worth of a person by what they can do or accomplish. However, it is not right to say that striving to be the best is bad because it can make you feel bad if you don’t get Olympic recognition for it, or it can make others feel bad if they’re not as good as you. Acceptance is a virtue. Also, didn’t God ask us not to hide our light under a bushel? If we are good at something, that’s because God gave us the talent to begin with, and we have to cultivate it and give it back to the world. I say that the great thing about the Own the Podium program is that it makes us work to win, to be the best, instead of being afraid to reach out for that gold in case we don’t get it. I’ve never seen an event that united not only the world, but also Canada, in the way that the 2010 Winter Olympics did. We were confident, we were proud (in a good way) to be Canadian and to have accomplished what we have accomplished. But although the Olympic Games quantify success through the giving out of Olympic medals, what is praised? That our athletes followed the Olympic motto of “Faster, Higher, Stronger”. That they held to the Olympic creed that the most important thing in the Olympic Games is not to win but to take part, just as the most important thing in life is not the triumph but the struggle. It was an emotional Saturday night as we watched Olympic bronze medalists Canadian figure skater Joannie Rochette and Slovenian cross-country skier Petra Majdic receive the Vancouver 2010 Terry Fox Award, an award that exemplifies courage and selflessness. Courage here meant to have fought against adversity to give their best. Rochette skated to bronze despite a heart broken by her mother’s death. Majdic skied to bronze, the first Winter Olympic medal for Slovenia in 16 years, while suffering from four broken ribs and a collapsed lung. It was also emotional to hear some of the back stories of our Olympic heroes. Of Canadian gold medalist for men’s moguls Alex Bilodeau, who couldn’t stop talking about how his brother Frédéric, who has cerebral palsy, is his hero. Of Canadian bronze medalist for speedskating Clara Hughes, who watched a feature on legendary speed skater Gaetan Boucher’s story during the 1998 Calgary Olympics. She was then a 16-year-old whose life was given over to drugs and partying, and she testifies today that sports saved her life. If only more Catholics were so strong in personality and outspokenness that our world, so saturated by noise and distractions, can hear us! There’s a lot Canadians have learned about patriotism and confidence because of the Olympics and the investment Canada has made in our athletes. We Catholics can learn a lot from the Olympics as well. - Photos: © VANOC/COVAN