Vatican City: Leading up to the Canonization

We are just hours away from Br. André's Canonization and the excitement is growing. The team of journalists who have descended on Rome to cover the Synod of Bishops is now torn about what to cover. Canadian flags are popping up everywhere as Canadian media arrive to interview any Canadians who can talk about why this canonization is so important. 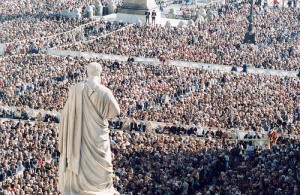 Canadian pilgrims are slowly popping up in the crowds, recognizing each other thanks to discreetly displayed Canadian Flag badges on backpacks and stickers on cameras. Then there's a tentative moment as two Canadians try to figure out which official language to use. Having figured that out a beautiful conversation follows, usually starting with, "So, you're here for Br. André?". So far I've met a deacon from Toronto who originally hoped to come with a group of pilgrims. When that plan fell through he decided to come on his own despite the fact that his arthritis makes it difficult for him to walk long distances or walk quickly. He told me, "I have to be here, I'm praying for Brother Andre to heal me of my Arthritis." 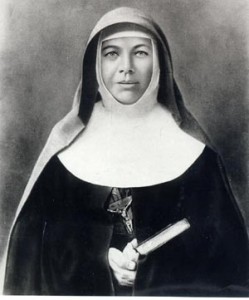 A Canadian-Australian woman brought her two grown daughters on a pilgrimage from Australia for the canonization of Mary MacKillop. When Australian journalists asked her for her thoughts on this canonization she announced, "I'm a Canadian-Australian, I'm doubly excited!" She said the she connected with the fact that both these soon-to-be saints experienced suffering and could identify with her own pain. The Vatican is also in full canonization mode. Extra seating has been put up in St. Peter's square and the international media were briefed by Father Lombardi, the director of Vatican Television, Vatican Radio, and the Vatican Press Office about what to expect at the Canonization. The various postulators have been given special roles in the liturgy, reading the saints' biographies, bringing the relics of the saints to Pope Benedict for veneration, and bringing up the gifts during the offertory. Of course, official delegations have also arrived. This morning Canada's minister of Foreign Affairs, Lawrence Cannon arrived in Rome along with Noelle Kinsella, Speaker of the Senate. The Mayor of Montreal and the Lieutenant Governor of Quebec are also here. The Canadian Conference of Catholic Bishops' delegation has also arrived. Bishop Pierre Morissette, President of the Conference, is here preparing for the moment along with his confréres Archbishop Terrence Prendergast of Ottawa, and Archbishop Thomas Collins of Toronto. On Friday night, the official portraits of the soon-to-be saints went up on the facade of St. Peter's, and there he is, the man who described himself as "St. Joseph's little puppy" on display as an example of simple sanctity for all the world to see.