The two events that changed Toronto

This post was written in 2010, just after Ontario hosted the G20 summit. Kris Dmytrenko reflects on how that event and the WYD2002 Way of the Cross changed the city. 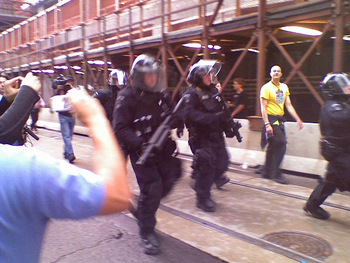 It takes a powerful force to interrupt the flow of a city like Toronto. If streets are closed for a parade, drivers find other routes and life continues as usual. Even a convergence of thousands will escape the notice of most citizens. Only two events, in my experience, have actually managed to overwhelm the routines of the city. One was just a month ago. I was walking to St. Michael’s Cathedral for Saturday evening Mass when I noticed that the front gates were closed. Because of the G20 Summit, I was told, the liturgy was canceled. Annoyed, but already out of the house, I decided to walk around to witness the protests first hand. A significant portion of crowds consisted of curious bystanders like me. Together, we shook our heads disdainfully as armed riot police marched by in formation, resembling post-apocalyptic foot soldiers, entirely alien to a city like ours. 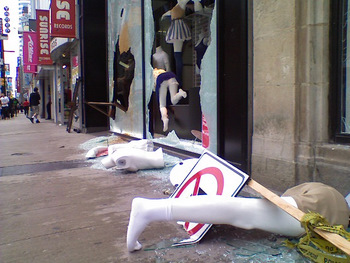 But the honest among us would admit to feeling a little thrilled by the excitement. Like tourists in our own city, we snapped pictures of each damaged storefront. (Considering the hordes of amateur reporters armed with cell phone cameras, this must have been the most documented event in the city’s history.) Others pocketed small broken glass souvenirs. These touristy reactions were sadly appropriate: as John Bentley Mays lamented in the Catholic Register, the streets were no longer our own. That was a rude awakening for some of us. A peaceful, devout friend of mine (who, incidentally, was a past guest on Perspectives: Weekly Edition) was also taking in the protests. We had been texting our impressions to each other until he was arrested by the police. The only stated reason, he says, was that he was wearing a bandanna around his neck. With no one aware of his whereabouts, and prevented from using a phone until the next day, he languished in the city’s makeshift jail for 28 hours. Torontonians mourned their disfigured city. I remembered a better time. 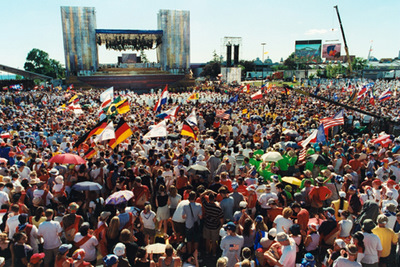 Back in 2002, Toronto was visited by a very different assembly of global leaders and zealous youth. These were the Bishops and Cardinals, and young pilgrims, and they loved each other. They marched up University Avenue without anger or fear, instead reflecting on how Jesus laid down His life in the Way of the Cross. Their cheers resounded not with hostility, but with joy and praise. They came to Toronto to change the world. But they also fervently desired to be changed themselves, to see their ambitions reconciled with God’s great plan for their lives. This was World Youth Day. Eight years ago today, the celebration concluded with Canada's largest ever public gathering: Holy Mass with John Paul II and 850,000 of his friends. Neil MacCarthy, director of communications and public relations for the Archdiocese of Toronto, also noted the stark contrast between those transformative events in the life of our city:

The summer of 2002 was a special one. The summer of 2010 in our city? I guess it will be remembered first for G20 security, protests, arrests and some damage to the downtown core. Instead of fencing in our city, maybe we just needed some more people willing to sing on the bus, share the food in their knapsacks and the prayers in their hearts?

For the G20, Toronto had to accommodate the world’s most powerful leaders, closely followed by the world’s loudest, most destructive activists. Together they could deform Toronto for only a few days, and few believe they will leave an enduring legacy. The fruits of World Youth Day, however, continue to grow in the hearts of those who took in the Spirit of that blessed week. Having sanctified our parks, avenues and streetcars, WYD changes us still.