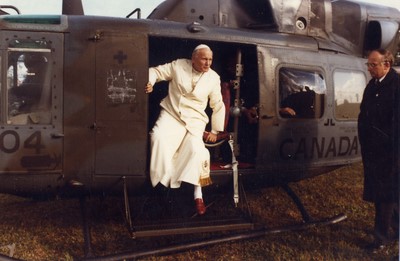 Where were you when John Paul II landed on Canadian soil? That's the question that's been bouncing around the Salt+Light offices for the last few weeks. My French speaking colleague Sebastien Lacroix and myself have both been working on a one hour special to commemorate the 25th anniversary of John Paul II's first papal voyage to Canada. (the English version premiered Thursday September 10th). Every time Sebastien and myself went out to interview someone for the special we'd return to the office with our hands full of tapes, and our heads full of stories we felt compelled to share with our colleagues. Those Salt+Lighters who are fortunate enough to remember 1984 would jump in with their own memories and inevitably end up asking "Where were you when John Paul II was here?" Even visitors to our studios got caught up in the John Paul II Fest, sharing their own memories of that visit, or memories of where they were and what they were doing in 1984. I think it's only fair to open the discussion to everyone who was in Canada in 1984. Where were YOU when John Paul II visited Canada? What do you remember about that voyage? Did you get to meet him somewhere along the way? Are you one of the many children he blessed across the country? Click on the "leave a comment" link at the bottom of this posting to send us your memories of John Paul II's 1984 visit to Canada. You can also catch John Paul II in Canada: A 25th Anniversary again on: