The Desert Shall Bloom 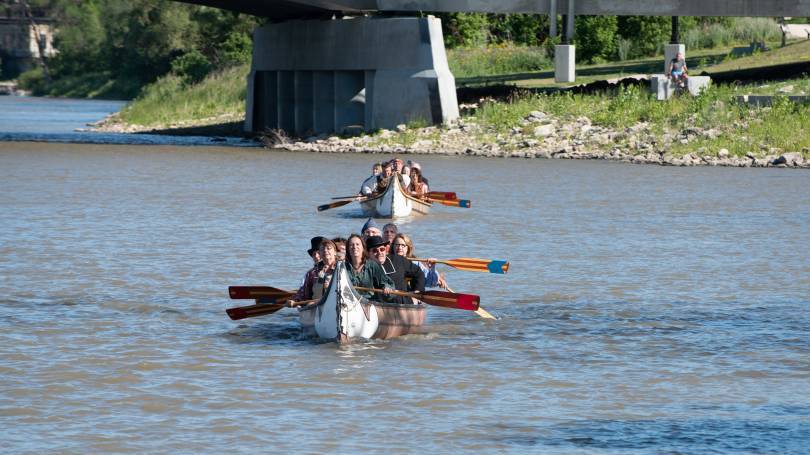 After navigating along the Red River, the three bishops from Manitoba disembarked at the Taché Dock on July 15, 2018. Archbishop Albert LeGatt of Saint Boniface, Archbishop Richard Gagnon of Winnipeg, and Archbishop Murray Chatlain of Keewatin-Le Pas arrived, each one dressed in a black cassock with a traditional Métis sash around the waist. On the dock, men and women in period costumes greeted them. On the stairs, separating the dock and Taché Avenue, hundreds of members of the Catholic community of Saint Boniface and surrounding regions were gathered. At the sound of the drum, the bishops took part in a traditional purification ceremony, a sign of the friendship that continues to grow between the Church and the First Nations. The scene took us back 200 years to the time when Father Joseph-Norbert Provencher, Father Sévère-Joseph-Nicolas Dumoulin, and a young seminarian arrived on July 16, 1818, at the junction of the Assiniboine and Red Rivers. These three French Canadian missionaries were welcomed by Alexander MacDonell, governor of the Red River Colony. They had been sent to establish the first Catholic mission, which would become the cradle of the Catholic faith in the North and West of Canada with a territory that would, in the beginning, extend from northwestern Ontario to the Rocky Mountains. The historical re-enactment that took place 200 years later, on a sunny Sunday morning on the bank of the Red River, was one of the highlights of the celebrations marking the bicentenary of the Catholic Church in Northwestern Canada. From July 13 to 15, the archdiocese also organized an ecumenical service, a conference on the spiritual legacy of our western pioneers, a solemn Mass at the Cathedral of Saint Boniface, a multicultural festival, and a concert featuring renowned Canadian artists. Pope Francis even named Cardinal Gérald Cyprien Lacroix, Archbishop of Quebec and Primate of Canada, as his official representative for this jubilee. It was an opportunity to remember two centuries of shared history with the various communities that make up the fabric of Catholicism in the Canadian Northwest today, a shared history marked by periods of light but also by periods of darkness. In his homily at Sunday Mass, Cardinal Lacroix said these celebrations point to “the 200-year presence of Christ’s disciples and accomplishments”. Those accomplishments are many. After the arrival of the first missionaries, other priests and religious landed in Saint Boniface to open churches, convents, schools, and hospitals. These religious men and women allowed the Catholic faith to take root throughout the territory. Around this time of missionary growth, we witnessed the opening of residential schools. The reality of these schools is still fresh and is part of the darker part of Catholic history in the country. Bishops of northwestern Canada are deeply aware of this reality and recognize that to continue to evangelize in truth, as the Primate of Canada indicated, it is crucial not only to make peace with the past but especially to “pursue community relationships in harmony, respect, and justice”. “We need only measure the road ahead to heal the wounds of the past and gather believers”. As the Pope’s special envoy, Cardinal Lacroix, reiterated the Holy Father’s “closeness and concern during the ongoing process of healing, reconciliation, and search for harmony” in Canada. Archbishop LeGatt, host of the celebrations in Saint Boniface, pointed out that reconciliation is necessary for the salvation of the world because God the Father, in his love, wanted to reconcile humanity to himself through his Son Jesus. The story of humanity has always been marked by periods of great division and great suffering. They were overcome through dialogue, the archbishop told us, and thanks to bold men and women. Cardinal Lacroix insisted on the urgent need for a new missionary drive today. He listed the challenges still before us: the “huge deficit of hope among many of our men and women citizens,” “a large number of individuals and families [who] do not have a place in any community,” “children hungering and thirsting for food and affection,” “persons painfully striving to escape even at least a bit of misery,” or “victims of segregation and ostracism.” To tackle these issues, he invited all the faithful to respond with the same vigour and boldness as the first missionaries. The grand celebrations of the bicentenary ended with that invitation. The desert shall bloom, spiritual renewal in the North and West of Canada will happen through men and women who, inspired by the Holy Spirit, will dare to leave their comfort zones and make known the love of Christ Jesus. “Go, you will be a prophet to my people of Manitoba, Saskatchewan, Alberta, British Columbia, the Yukon, the Northwest Territories, and Nunavut.” The Salt + Light team was on the ground during the July celebrations. All of the events were broadcasted LIVE on our network and online. You can watch them here. Be sure also to check out our short videos featuring stories around the 200th anniversary of the Church in Northwestern Canada.