Telling them apart: You mean there’s another John Newman/Neumann? 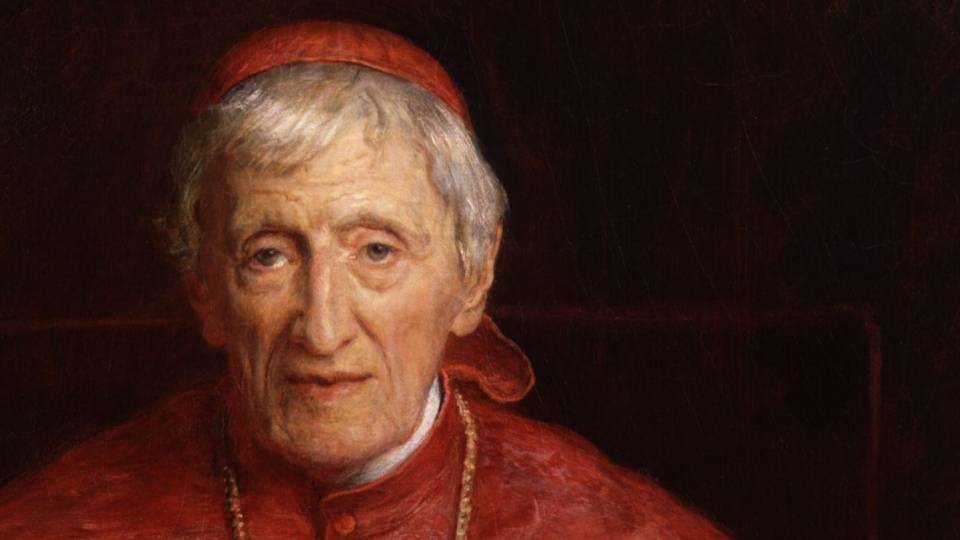 I remember the first time it happened. I was talking to my sister-in-law, and somehow we got on the topic of NYOO-min and education. Suddenly, our conversation came to a grinding halt. “Wait. You’re talking about the American saint, right?” “No, the British blessed. Who are you talking about?” “John Neumann, bishop of Philadelphia.” WAIT! YOU MEAN THERE’S ANOTHER ONE?! That was my introduction to the holy man credited with founding the Catholic school system in America. And ever since then, I’ve made sure to clarify with people: “Are you talking about Saint John Neumann or Blessed John Henry Newman?” But now in four days, even that distinction will become obsolete when the celebrated intellectual and famous English convert is canonized by Pope Francis in Rome. So I guess it’s time we learned to tell them apart. And it’s not easy because they actually have a lot in common besides their name and the usual saintly qualities. They were both Catholic priests living in the nineteenth century. Both served minority Catholic communities living among a Protestant, and often anti-Catholic, majority. Both saw the importance of the education of the laity as a vital way for Catholics to preserve their faith amid a Protestant society and also to become active, valuable members of that society as Catholics. And it is that aspect of their lives for which both men are remembered most. 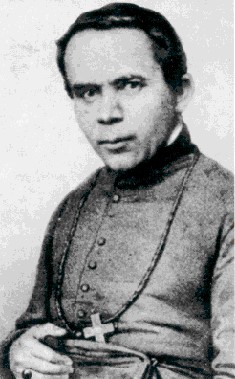 Born in the Bohemian mountain village of Prachtice in 1811 to a German father and a Czech mother, this future saint felt a call to the priesthood from a young age, but when at last he had completed his studies and seminary training, his bishop put an indefinite moratorium on ordinations due to the surfeit of priests in that part of the world. If young John Neumann wanted to be a priest, he would have to find a place for himself in mission territory. And that is exactly what he did. In 1836, he arrived penniless in New York, and three weeks later, he was ordained by the Bishop of New York, who was desperate for German-speaking priests to minister to the growing population of German immigrants in his diocese. The new priest was immediately sent out into the wild country of western New York to serve the Catholics in and around Buffalo. He spent four years there, zealously traversing the countryside to visit his parishioners and bring the sacraments to isolated families. But the physically demanding life and Neumann’s penchant for severe penances took their toll on his health. Plus, he lacked the kind of society which would have given him necessary moral and spiritual support. In 1840, he left Buffalo for Pittsburgh to join the Redemptorist novitiate there, becoming the first recruit to join the American branch of the order. In 1851, Neumann made a fateful acquaintance. Archbishop Francis Kenrick had recently vacated his see in Philadelphia to take up his new responsibilities as Archbishop of Baltimore. He found in his new confessor, the Redemptorist Father John Neumann, the perfect candidate to replace him in Philadelphia – much to the horror of Neumann, who asked his friends and acquaintances for prayers to avert this impending disaster. But Kenrick had his way, and on his 41st birthday, Neumann was consecrated as the fourth bishop of Philadelphia. As bishop, Neumann continued to live a life of hard work, penance, and voluntary poverty, even though he was criticized by other bishops who felt he did not give due reverence to his exalted status with his shabby ways, and some even complained about him to Rome. But Bishop Neumann was concerned only for the welfare of his flock. In the eight years of his episcopacy, he oversaw the erection of 80 churches and began a diocesan-sponsored school system which became the model for dioceses across the country. Like his British namesake, Bishop Neumann understood the need for Catholics to be educated in a Catholic environment and for laity to have a good understanding of their faith. He wrote two catechisms (a small one and a large one), which were approved by the American bishops and used throughout the United States until they were replaced by the Baltimore Catechism in 1885. He also strove to serve the people under his care on a personal level. Many of his new flock were poor Irish immigrants who spoke no English. So Neumann taught himself Gaelic, in addition to the English, French, Italian, Czech, and German which he already spoke fluently. On January 5, 1860, although he was feeling unwell, the “little bishop,” as he was known (he stood only a couple of inches over five feet), went out to mail a chalice to a priest in a rural parish. On his way home, he collapsed in the street, and though he was brought to a nearby house, he died before a doctor could be called. In 1977, he became the third American (that is, a citizen of the United States) canonized saint, and he is still to this date the only male American saint. His feast day is January 5. 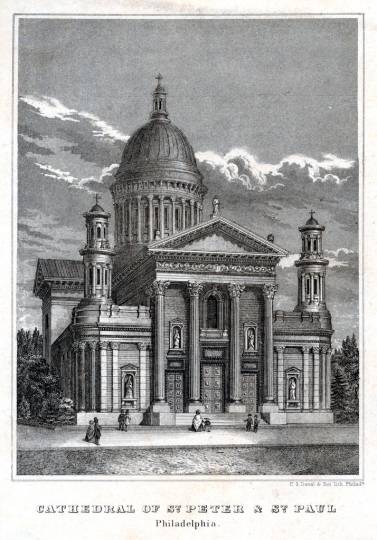 Print of the Cathedral of St. Peter and St. Paul in Philadelphia, by P.S. Duval & Son Lithography, Philadelphia, and dating to around 1859. Source: World Digital Library

John Henry Newman was born in 1801 into a middle-class Protestant family in London, England. He, too, exhibited strong religious tendencies in his youth and was ordained a priest in the Church of England in 1825. A talented thinker, he received a prestigious fellowship at Oriel College (part of the University of Oxford), where, as a Tutor, he began to formulate his understanding of the purpose of education, until he was forced out of his teaching post due to a difference of opinions with the head of the college. But his influence in Oxford did not end there. He was the vicar of an important parish in the city, and he soon became part of a controversial movement which aimed at combatting liberalism within the Anglican Church and resurrecting rituals and devotions from the medieval past within a solid Anglican framework. The Tractarians, as they were known (after their publications, Tracts for the Times), were determined and outspoken and gathered a significant following, though they were greatly repudiated by those in power at the time. However, in the end, they changed the face of modern Anglicanism. Newman, though shy and sensitive, was a brilliant controversialist and came to be considered a leader of the movement, so much so that Tractarians were often called by their opponents, “Newmanites”. But his experience with the Tractarian Movement eventually led Newman to the conclusion that the Anglican Church could not be considered a continuation of the Church of the Apostles. Only the Church of Rome could have that claim. Always one to follow the dictates of conscience above all else, on October 9, 1845, John Henry Newman became a member of the Roman Catholic Church. He became a Catholic priest and founded a branch of the Oratory of St. Philip Neri in England, first in Birmingham and later also in London. This was a time of newfound freedom for Catholics in England, and Newman was a strong advocate of education as giving Catholics a way to become more active and effective members of a society that was not only Protestant but also increasingly liberal and atheist. He disparaged members of the hierarchy who preferred an ignorant laity and was involved in various efforts to improve the education of Catholics in England and Ireland. At the same time, he was a devoted pastor of souls, ministering to the poor, working masses in the industrial city of Birmingham. He even volunteered, when the bishop appealed to the Oratory for assistance during a severe outbreak of cholera, to go himself among the poorest of the poor. (Keep in mind that cholera was a deadly disease, and England was still five years away from discovering that it spread through contaminated water rather than by air, as was commonly believed at the time.) Newman was a gifted thinker and writer and a master of the English language. Though he tended to write about issues topical to the current moment, much of his writing speaks to eternal truths and so has endured. He is particularly remembered for his contribution to Catholic thinking on conscience, education, and the nature of religious belief. Having been made a cardinal by Pope Leo XIII in 1879, he died in 1890, revered by both Catholics and Protestants alike in England. In 2010, he was beatified by Pope Benedict XVI, and on October 13, 2019, he will be canonized by Pope Francis. His feast day is October 9. 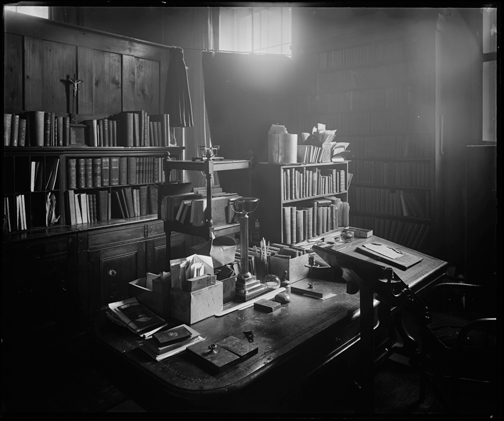 One of the reasons it’s so easy to confuse these two saints is that Neumann’s name is usually given the American pronunciation of NYOO-min (or NOO-min) rather than the original German pronunciation of NOY-min. And though you do hear the German version from time to time, it is definitely in the minority. After all, he was a US citizen and a leader of the American Church, so let’s just stick with the Americanized version. He’s definitely earned it. So the only other thing that can save us is our habit of calling Newman by all three names. I’ve never heard anyone who knows and loves Newman call him “John Newman,” but as his canonization approaches I have heard that version coming out more often. And I guess I wouldn’t mind so much if it didn’t cause so much confusion with his American namesake. Because here’s the thing. Publicly, he was known as “John Henry Newman,” and he signed his letters variously “John Henry Newman,” “John H Newman,” “J H Newman,” and “JHN”. But to judge from letters written to him, his family did call him “John” more than they called him “John Henry”. (I even found one “Johnnie” in a letter from his sister Harriet. How sweet.) So perhaps we should just resign ourselves to perpetual confusion and use those Newman-or-Neumann moments to spread the word about these two great saints.

Now this baffles me

When I mentioned to people that I was reading about John Henry Newman for work, more than one person mistakenly believed I was talking about Henri Nouwen, the popular Canadian spiritual writer. I can only account for this confusion by assuming people are under a delusion concerning the pronunciation of his name. It’s NOW-in.