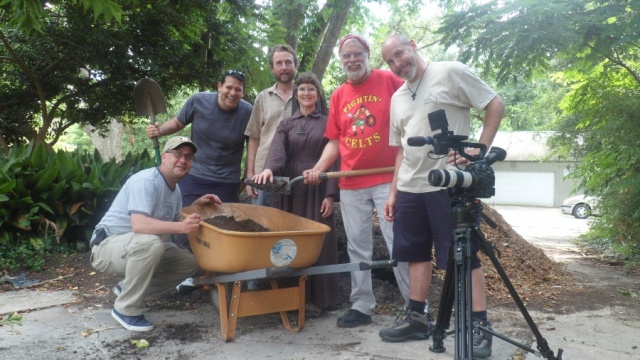 Very few of us would argue that we have to care for the environment, in fact Pope Francis has said that it is our moral duty to care for Creation (Morning Homily from Feb 9, 2015). How does this notion square with the idea that Scripture tells us to dominate and subdue the earth? I think the response to that is found in a term that we've been hearing about much lately and that will be integral (no pun) to the Pope's upcoming encyclical on ecology: Integral Ecology. As you already know, for the last five years I have been working on Creation, our six-part series that looks at the Catholic teachings on the ecology. The approach that we've been taking is the "integral" approach. But defining the term is not all that easy (perhaps that's why we need an encyclical). As I write this, I am in Lubbock, Texas working on a story on water shortages for our series. I decided to ask my partner on this project, Sr. Damien Marie Savino, FSE, who not only is a Franciscan Sister, but also an environmental engineer and the Chair of the Department of Environmental Science and Studies at the University of St. Thomas in Houston, how she would define "integral ecology". Sr. Savino began with the etymology: "Integral means "whole" or "pertaining to the whole" and the word "ecology" comes from the Greek "ecos" which means home (ecology means "study of the home"). Therefore, the term "Integral Ecology" means a truly "catholic" (universal) understanding of ecology (a holistic understanding of our home), which includes the human and the natural ecology." So integral ecology means the respect of both the human and the natural ecology. If we disrepect one, we disrespect the other. If you elevate one, you elevate the other. Sr. Savino was clear to point out that "human ecology" includes the moral structure that is part of our life together as human beings. This means that there is a natural morality (a sense of right and wrong) that we have, which is an important part of our human ecology. So if practicing intergral ecology includes respecting the moral structure. At the same time, the "natural ecology" means respecting the laws that are in the created world, the "grammar of nature" (to quote Pope Benedict XVI), which are written there by the Creator. Scripture tells us that God "saw that it was good" (see Genesis 1). Indeed Creation is good, but Integral Ecology means recognizing not just the instrumental good but the intrinsic goodness and beauty of all Creation. An apple is good because it is good to eat, but it is also good in itself. We are good because we are Creation. In relation to humans, Sr. Savino said that "Integral Ecology" means that humans are integral to nature (so that counters the idea that humans are dominators, but not to deny that we have a special place as caretakers who are created in the image and likeness of God). Saying that humans are integral to nature means countering the commoditization of nature, the consumeristic and throwaway culture, utilitarian attitudes and the loss of the sense of the innate dignity of all life. It also calls us to counter the loss of the sense of awe and wonder and contemplation. Sr. Savino added, "when we are truly integral to the ecology we are protecting, we are stewarding and we are mediating creation into its full fertlity." This is why Pope Francis says that Integral Ecology is our Christian duty. On that Feb 9th, 2015 morning homily he said that, "a Christian that does not care for creation, that does not make it grow, is a Christian who doesn't care about the work of God; that work born from the love of God for us. And this is the first answer to the first creation: to care for Creation, to make it grow." Being a Franciscan Sister of the Eucharist, Sr. Savino was sure to end by using St. Francis as an example of a truly lived Integral Ecology. She said that his response of reverence, fraternity and praise of God through His creatures exemplifies Integral Ecology. I guess that's what his Canticle of Creation reflects and perhaps why Pope Francis is naming his encyclical after this Canticle, Laudato Sii (Praised be).

Be sure to join us on Tuesday, June 16, for the premier of Creation with our first episode, Sense of Wonder. It will air on S+L TV at 8:30pm ET and will be available for viewing on demand all that week on our website.

And if you're still trying to figure out what the Pope will be saying about ecology, why not take a cue from what he wrote about the environment in his Apostolic Exhortation, Evangelii Gaudium: From Evangelii Gaudium:

215. There are other weak and defenceless beings who are frequently at the mercy of economic interests or indiscriminate exploitation. I am speaking of creation as a whole. We human beings are not only the beneficiaries but also the stewards of other creatures. Thanks to our bodies, God has joined us so closely to the world around us that we can feel the desertification of the soil almost as a physical ailment, and the extinction of a species as a painful disfigurement. Let us not leave in our wake a swath of destruction and death which will affect our own lives and those of future generations.[177] Here I would make my own the touching and prophetic lament voiced some years ago by the bishops of the Philippines: “An incredible variety of insects lived in the forest and were busy with all kinds of tasks… Birds flew through the air, their bright plumes and varying calls adding color and song to the green of the forests… God intended this land for us, his special creatures, but not so that we might destroy it and turn it into a wasteland… After a single night’s rain, look at the chocolate brown rivers in your locality and remember that they are carrying the life blood of the land into the sea… How can fish swim in sewers like the Pasig and so many more rivers which we have polluted? Who has turned the wonderworld of the seas into underwater cemeteries bereft of color and life?”[178] 216. Small yet strong in the love of God, like Saint Francis of Assisi, all of us, as Christians, are called to watch over and protect the fragile world in which we live, and all its peoples.

The footnote (177) refers to the Final Propositions of the Synod on the New Evangelization, to which the Apostolic Letter responds:

Proposition 56 : STEWARDSHIP OF CREATION The Stewardship of creation also serves evangelization in many ways. It is a witness to our faith in the goodness of God’s creation. It demonstrates a sense of solidarity with all those who depend for their life and sustenance on the goods of creation. It shows inter-generational solidarity with those who come after us, and is a clear witness to the responsible and equitable use of the goods of the earth, our common home.

- Photo: Some of our Creation team. From L. to R.: Wally Tello (cameraman), Fr. Dempsey Rosales (our Scripture Scholar), Dr. Jim Clarage (our Physicist), Sr. Damien Marie Savino (our co-writer and Catholic Environmental expert), Fr. Ted Baenziger (the orchid lover) and Deacon Pedro. Taken while we were all working on the urban garden on campus at the University of St. Thomas in Houston.