Statement by President Obama on the Canonization 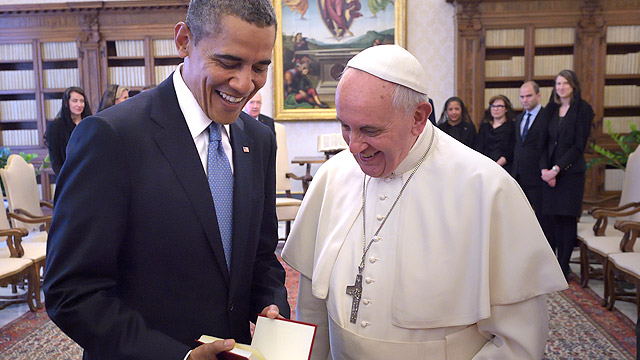 Statement by President Obama on the Canonization of Pope John XXIII and Pope John Paul II:

Today, Michelle and I join Catholics around the world in celebrating the canonization of Pope John XXIII and Pope John Paul II.
The work and witness of both Pope John XXIII and Pope John Paul II shaped not only the Catholic Church but the world. Pope John XXIII articulated powerful roles for the Church in the cause of global peace and justice, and by convening the Second Vatican Council he revolutionized not only aspects of worship but the Catholic Church‚s relationship with other faith communities. Pope John Paul II helped inspire the Solidarity movement in Poland, a movement that spread and eventually helped to end communism in Eastern Europe, and he spoke out forcefully against apartheid in South Africa and genocide in Rwanda. He had a special rapport with young people, drawing many of them to the Church‚s work and teachings.
We celebrate these Saints and the leadership of His Holiness Pope Francis, and we look forward to continuing to work with Pope Francis and Catholics around the world to advance peace and justice for all people.