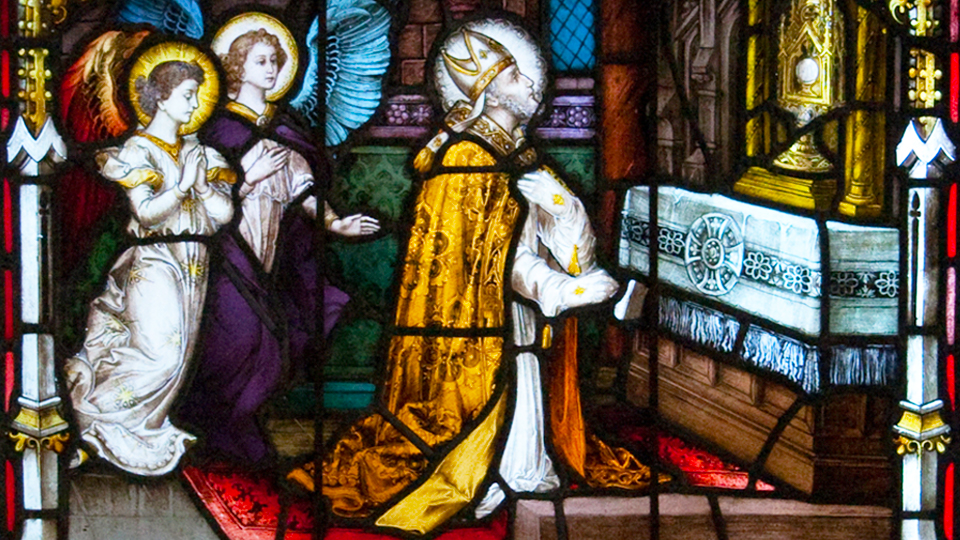 The Visits to the Most Holy Sacrament. by Franz Mayer & Co.
Feast of St. Alphonsus Liguori, Bishop and Doctor of the Church: August 1st
Founding an influential religious order, championing devotion to the Blessed Sacrament, the Blessed Mother, and the Sacred Heart, and mastering Catholic Moral Theology: these are but a few of the achievements that make the life and ministry of St. Alphonsus Liguori a true gift to the Church, both for his time and ours. St. Alphonsus was born on September 27, 1696, and died two hundred and twenty five years ago today, August 1, in 1787. In the intervening years, his life was spent as a prolific spiritual writer, a renowned philosopher and theologian of the Scholastic tradition, a zealous pastor, and a man of deep personal holiness and prayer. Born to a wealthy Neapolitan family, St. Alphonsus’s brilliant mind earned him degrees in both canon and civil law by the age of sixteen. To the satisfaction of his affluent family, he practiced law as a respected lawyer until the age of twenty seven, when he suffered a disappointing loss in court. His disappointment prompted him to seek the meaning he longed elsewhere, and so he entered the seminary and after three years of formation was ordained a priest at the age of thirty. In response to the pastoral needs of the impoverished farming families that inhabited the hillside surrounding his native Naples, St. Alphonsus established the Congregation of the Most Holy Redeemer in 1732. In his 1748 petition to have the congregation formally recognized canonically, St. Alphonsus told Pope Benedict XIV of the state of those he sought to serve. They are, he articulated, “the most in need of spiritual help, as frequently they have no one to administer to them the Holy Sacrament or the Word of God; their plight is such that many, for lack of (apostolic) labourers, reach death's door without knowing anything at all of the necessary truths of the faith. This is because the number of priests…is few.” The following year, the Holy Father granted his wish to establish the missionary congregation, whose purpose was cater to the needs of those least fortunate, and imbue their lives with the flavour of the Gospel message. Since then, the Redemptorists have grown to a membership of over five thousand, and their missionary activity has extended into seventy eight countries where they persevere in the charism of their visionary founder: to bring the Good News of Christ the Redeemer to those most desperate and abandoned. In 1762 St. Alphonsus was named Bishop of Sant’Agata dei Goti, an appointment he unsuccessfully attempted to refuse. During his episcopate he intensified his intellectual pursuits and pedagogical efforts, penning his seminal work Moral Theology, rearticulating and defending a robust, authentic Catholic Mariology, and encouraging devotions to the Blessed Sacrament, the Blessed Mother, the Sacred Heart, and the Way of the Cross. Recognizing the depth and authenticity of his holiness, Pope Gregory XVI raised St. Alphonsus to the glory of the altar in 1839, and in 1871 he was declared a Doctor of the Church by Pope Pius IX, under the title “Doctor Most Zealous.” St. Alphonsus with his great intelligence was able to perceive with clarity the needs of his day, and address them effectively with pastoral charity and spiritual profundity. In our day, as in his, the harvest is indeed plenty but the labourers are few. Let us pray therefore the Lord of the harvest to send labourers into his harvest, but let us also, following the great vision of St. Alphonsus, seek to further in an ever greater way, the redemptive work and action of Christ in our day: in our homes, in our workplaces, in our social circles and neighbourhoods, in our society, and in our Church. May she, whose faithful son he was, be ever aided by his heavenly intercession, and may the example of his life stir us to build up the great People of God he so sought to serve and sanctify. On this day and always, may St. Alphonsus Liguori be remembered as a tender, holy pastor with a keen and focused intellect: a Doctor Most Zealous for his own time, for ours, and for generations to come.

Prayer to Jesus Christ Crucified by St. Alphonsus Liguori
My good and dear Jesus, I kneel before You, asking You most earnestly to engrave upon my heart a deep and lively faith, hope, and charity, with true repentance for my sins, and a firm resolve to make amends. As I reflect upon Your five wounds, and dwell upon them with deep compassion and grief, I recall, good Jesus, the words the Prophet David spoke long ago concerning Yourself: “They pierced My hands and My feet; they have numbered all My bones.”